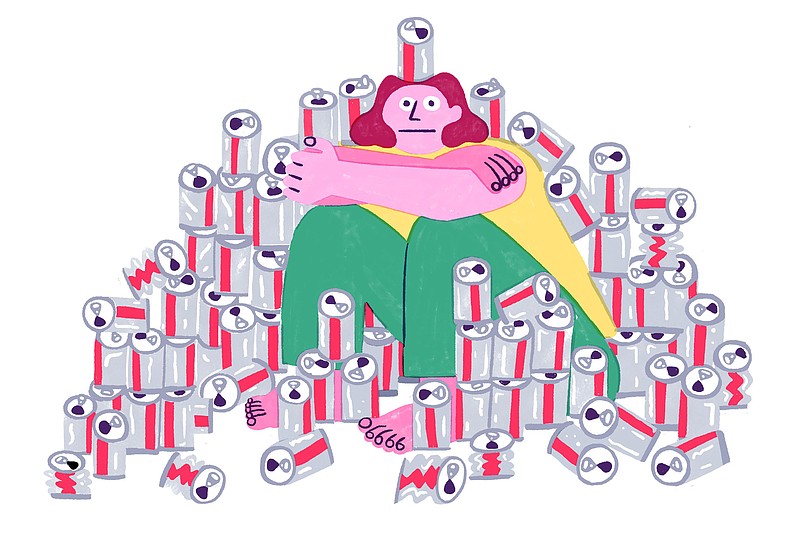 After I discovered Diet Coke in 1982, I drank at least three to four 12-ounce cans nearly every day for the next four decades, no matter where in the world I was.

I was the person who avoided certain airlines because they only served Pepsi. Who bought out an entire store's inventory in New Delhi because she feared she might not encounter another soda in the rest of the country. Who stashed cans in her room when she visited her parents, like an 18-year-old with a bong, except she was in her 40s.

At various times I tried to stop, but I could never deprive myself for longer than a week. As a noncoffee drinker, it was my morning beverage.

I loved my fully loaded DC, and only in the silver-and-red can, so I could hear that Pavlovian pop when I cracked it open. No plastic bottles, fountain soda or Diet Coke cake. (Yes, it's a thing.)

I drank with vigor until earlier this year, when two things happened almost simultaneously. The left side of my abdomen had been throbbing for months, but doctors were unable to figure out the problem. CT scans, ultrasounds and a colonoscopy turned up nothing. At around the same time, I began noticing that my beloved brew was starting to taste like I imagine a Tide pod would. There was a malignant aftertaste I'd never noticed before; I could imagine the chemicals swirling around in my stomach, targeting my insides. I wondered: Could there be a link?

In late June, after polishing off my second can of the day, pains shot across my stomach, and that was my last soda. Just like that, I was done, after 39 years. Why did it take so long? Was I truly physically dependent, or was it simply a bad habit?

Can a soft drink be addictive?

The American Psychiatric Association, which publishes the DSM-5, the diagnostic manual of mental disorders, categorizes all addictions — to alcohol, drugs, gambling, even paint thinner — under Substance Related and Addictive Disorders. Diet Coke is not mentioned; caffeine use disorder falls under the section "requiring further research."

Artificial sweeteners are nowhere to be found either. But in a 2007 study where laboratory rats were forced to choose between saccharin and cocaine, 94% of them chose the noncaloric sweetener — even if they had showed signs of dependence on the cocaine.

The 2,100 members of the Facebook group Diet Soda Coke Drinkers Who Want to Quit understand this.

Steven Walsh quit smoking 17 years ago. "That was easier than giving up Diet Coke," said Walsh, 38, an unemployed furniture mover in Kilkenny, Ireland. He went cold turkey this summer and had terrible headaches, along with feeling irritable and tired. "It was very tough," he said. Aspirin helped the pain, and to occupy his mind he went for long walks and read books.

These are classic signs of addiction, said Ashley Gearhardt, an associate professor in the department of psychology at the University of Michigan and the director of the school's Food and Addiction Science and Treatment Lab. "People lose control over it. They consume it even though they know they should stop. They're having compulsive behaviors. They go through withdrawal when it gets removed."

None of this is especially surprising. Large food companies have spent billions ensuring that we crave more junk food, said Pamela Peeke, an assistant professor at the University of Maryland and author of "The Hunger Fix."

Molly Carmel quit Diet Coke over a decade ago, but there was a time she guzzled at least six 12-ounce cans a day. For her, the attraction was physical and emotional. "It was a haven as a fat kid who wanted to be like the other kids — I could have soda even though I couldn't spare the calories," said Carmel, a licensed clinical social worker and founder of Beacon by MC, a program that helps people stop their destructive relationships with food and dieting.

Ten years later, she still longs for it.

WHY SO HARD TO QUIT?

Why is it so hard to quit diet soda?

Gearhardt points to two culprits: aspartame and caffeine. Or, to be more precise: craving for sweetness and for caffeine. Individually, they're bad; together, they're an addict's nightmare.

A 12-ounce can of regular Coke has 34 milligrams of caffeine, whereas Diet Coke has 11 milligrams more, according to Coca-Cola. (An 8-ounce cup of coffee has about 95 milligrams.) Artificial sweeteners activate the brain's reward system, but only about half as much as regular sugar, Peeke said. Faux sugar doesn't pack the same wallop as the real stuff, so it keeps you wanting more and more.

Not only is this tied to weight gain, especially in the belly, but it also leaves you with cravings. Aspartame is 200 times sweeter than table sugar. Serious drinkers are so used to the super-sweet taste that everything else seems bland in comparison.

Leatha Medina, 46, a talent acquisition manager at Jewish Family Services in San Diego and the founder of the Facebook group, had been trying to give up Diet Coke for decades. Her addiction interfered with her life on a daily basis. "I was late to work because the line at McDonald's was too long," she said. "I started getting disgusted at how Diet Coke was kind of leading my life."

She, too, battled severe headaches when she quit, along with "hilariously PMS crankiness," she said. She also had an extremely strong thirst that nothing seemed to quench, but the upside was that it forced her to drink more water.

Coca-Cola has a different take on what people refer to as an addiction.

"Food and beverages, like chocolate, for example, can trigger what scientists call 'reward centers' in the brain, but so can other things like music or laughter," said Daphne Dickerson, a spokesperson for Coca-Cola. "Regularly consuming food and beverages that taste good and that you enjoy is not the same as being addicted to them."

Earlier studies have linked diet sodas to strokes and dementia, diabetes and metabolic syndrome, and tooth decay, as well as abdominal cramps, diarrhea, hallucinations, headaches, joint pain and nausea. But doctors aren't able to say for certain whether it's the aspartame or saccharin or something else.

So how have some people finally managed to cut the cord?

In September 2020, Mindy Beller, 58, a technical editor for an environmental consulting company in Asheville, N.C., was diagnosed with breast cancer. She had a habit that involved eight cans of Coke Zero a day and didn't quit until after surgery, when doctors found more cancer and she realized she'd have to undergo chemotherapy. (Although diet soda hasn't been conclusively linked to cancer, she decided to avoid unhealthy foods.)

Beller used the Quitzilla app, a habit breaker and sobriety counter, which tracked her progress.

"Every time I had a craving, just looking at the app did something good in my brain," she said.

She didn't have a lot of physical side effects, but she did long for the drink. She credits the app with helping her stay on track.

Medina weaned herself in June 2019 after her sister-in-law, with whom she had a long-running bet, stopped smoking. Medina felt guilty that she hadn't lived up to her end of the bargain, so when she went to the McDonald's drive-thru she asked them to fill her Diet Coke cup all the way up to the top with ice, thus diluting the soda.

Gradually she grew to like the watered-down version, which helped her cut back entirely. Since quitting for good, she said, she no longer craves sugar or alcohol, and her fibromyalgia is better.

I stopped suddenly, but I would hardly call myself an overnight success; the first few days were rough. My head pounded from caffeine withdrawal and I lived on Tylenol. I always used to have a can of soda when I worked, and I couldn't concentrate without one.

Still, I'm planning to continue. My stomach hurts less, and my sweet tooth isn't as persistent. And I'm quite pleased with myself — I altered a lifelong habit. If I can do this, I can do anything. Even if it takes 40 years.