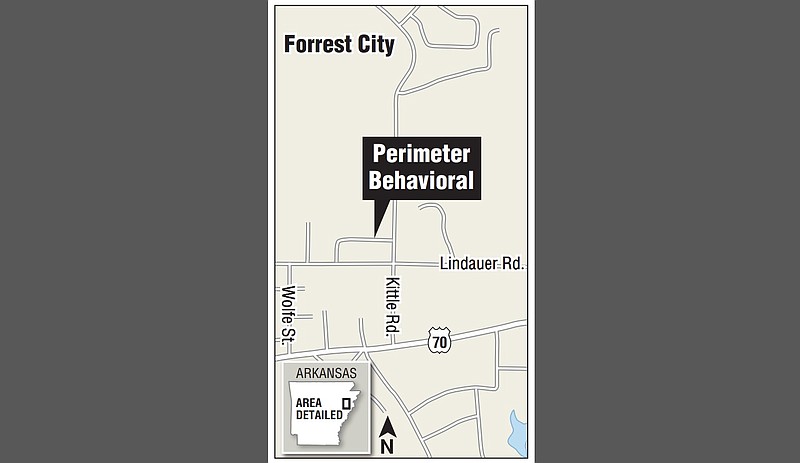 The location of Perimeter Behavioral in Forrest City is shown in this graphic. (Arkansas Democrat-Gazette)

A Forrest City mental-health site used "physical injury or threat of bodily harm" to manage childrens' behavior, even after regulators found out and asked for a fix, state records show.

Perimeter Behavioral of Forrest City entered a corrective agreement with Arkansas officials in July after a slew of citations, according to files obtained under the state's open-records law. Among other problems, employees failed "to use the minimal force" during physical restraint holds of children, the agreement says.

In one incident, camera footage showed a child "being slammed over his back and on to the floor" by a staff member, the agreement signed by the facility's administrator says. In another event, a child injured his wrist during an employee's "inappropriate" restraint hold of him. Workers in most incidents the document describes were fired.

The agreement is the third time this year that Arkansas officials formally upbraided a youth psychiatric center over episodes that hurt or could have harmed patients. It adds to a pattern of troubling lapses at facilities treating children with mental-health conditions and disabilities.

In May, the state Department of Human Services placed a Centers for Youth and Families residential treatment site on a similar plan of amends after staff restraint holds broke four childrens' bones. The Little Rock facility was the subject of a recent Arkansas Democrat-Gazette investigation into the fractures and other breakdowns in care.

Many of the recent issues at Perimeter, Centers and other similar facilities stem from restraints of children. Physical restraint holds are permissible in Arkansas, but they "shall be performed using minimal force and time necessary," under state regulations.

"While we recognize that there are issues involving COVID-19 and the workforce affecting facilities all across the state and country, it's difficult to say if these factors or others are contributing to any trend," Lesnick wrote in an email.

Perimeter's Forrest City facility treats psychiatric disorders in boys, and its employees "provide services and treatment to adolescents who have been sexually abused, are at risk to abuse, or have displayed sexually maladaptive behaviors," according to its website.

State data show 55 children were in the treatment center on Sept. 2.

"However, incident reports are still being received regarding the inappropriate use of physical force as a form of behavior management by staff," regulators wrote.

The agreement details at least six events that broke state rules for providers that treat children in residential settings. For example, a staff member was seen "shoving" a child to gain his obedience, regulators said, and "[c]amera footage shows inappropriate aggressiveness towards the resident."

A child came to a nurses' station crying and said a staff member "grabbed him by the neck and threw him in his room," another event description says.

Separately, inspectors wrote that sinks in all restrooms used by residents, as well as some air conditioners, weren't working.

Disability Rights Arkansas Director Tom Masseau, whose group has advocated for more stringent monitoring of psychiatric residential facilities, said self-reports of problems from Forrest City's leadership prompted the plan, rather than state scrutiny. (A Human Services' spokesman said self-reports and state monitoring "both played a role in this case.")

In Masseau's view, a new director at Forrest City is cleaning house and "trying to make things right."

"My hope is that [the corrective agreement] does not discourage others from coming forward and trying to do the right thing," he added.

The six-month agreement with the state requires Perimeter to further train staff, review restraint holds and make physical repairs to the property. Further serious rule violations, or ignoring the plan's terms, could result in a recommendation of adverse action against the facility's license.

Perimeter Healthcare operates 12 total behavioral-health facilities across six Southern states, including Arkansas, according to the parent company's website. Other Arkansas centers are in Springdale and West Memphis.

Perimeter Behavioral of Forrest City was among facilities about which the state's child welfare agency review board received a roughly three-minute update in an Aug. 26 meeting. The board, largely made up of provider representatives, acts as the state's oversight authority for 103 private groups that care for children.

Human Services licensing staff members summarized Perimeter's situation without extensive discussion by the board. Increased monitoring at Forrest City will continue, the staff said at the meeting.

That means more frequently than the required quarterly visits, a spokesman later said, without providing specifics of how frequently the state will have eyes on the facility.

At the board meeting, licensing staff members also praised progress at Centers for Youth and Families, which they said retrained the majority of its workers and has reported fewer problematic incidents. The site hasn't reported injuries related to physical restraint holds in some time, they noted.

Piney Ridge Treatment Center in Fayetteville also has seen "great changes" to its buildings and grounds, regulators said. It has added a gaming and activity area, improved reporting and put in place a new student council to bring concerns to the chief executive directly, they said.

The Fayetteville site went through a lengthy period of problems meeting state standards, this newspaper previously reported. In 2020, that included a plethora of issues, such as feces and food smeared on ceilings, no soap in restrooms and a complaint about derogatory comments made about a child or child's family, race or gender, board documents show.

The child welfare board sent reprimands to both Centers and Piney Ridge in 2021 over the purported quality-of-care problems. Those were the first such actions by the board since at least 2009, though the scoldings had no practical impact on the facilities' licenses.

Masseau, the advocate, said he's curious to see how the board treats these types of cases going forward. With Piney Ridge and Centers, the board sent letters "... but that's it. There's no enforcement with it," he said.