Expansion project will be presented to Benton County's justices of peace 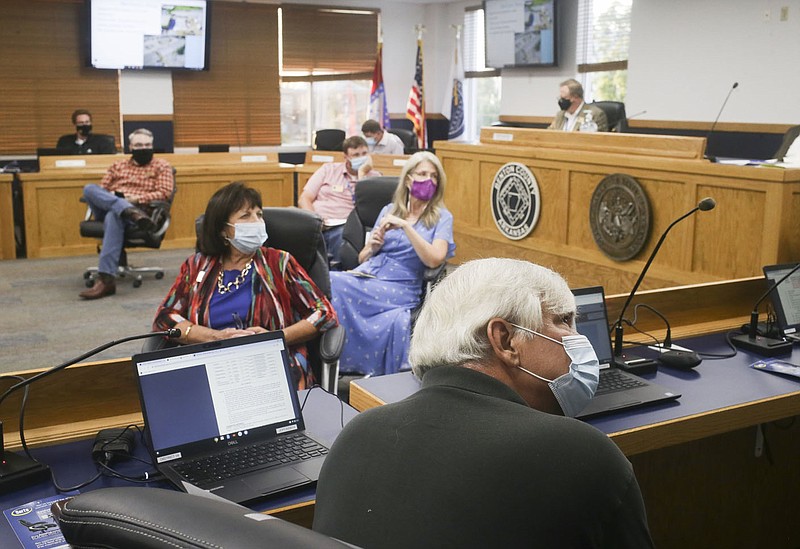 BENTONVILLE -- A committee is ready to present its plan to expand the Benton County Jail in an effort to prevent the spread of covid-19 or a future virus.

The Criminal Justice Coordinating Committee, which met last week, will make a presentation to justices of peace at the American Rescue Plan Committee meeting at 6 p.m. Thursday.

The federal plan provides $350 billion for eligible state, local, territorial and tribal governments nationwide, according to the county.

Benton County will receive a combined $54 million -- $27 million over the next two years. The possible jail expansion will be paid for with the federal money.

The presentation will focus on the short-term solution to address the overcrowding in the jail, said Bella Vista Mayor Peter Christie, who chairs the criminal justice committee. The immediate need is more bed space, he said.

Benton County Judge Barry Moehring said they plan to ask justices for $200,000 at the meeting for conceptual designs for the project, but said he did not yet want to speak on the budget for the expansion project.

Christie previously said it's expected the jail will need at least 2,500 beds by 2045 because of the area's population growth. He said that's why the committee will be looking at solutions other than just expansion.

The jail has a capacity of 667 beds and the sheriff's office. It had 669 inmates on Thursday, Lt. Shannon Jenkins, a spokeswoman for the Benton County Sheriff's Office, said.

Moehring said at Thursday's meeting that money from the American Recovery Plan can be used for covid mitigation and covid prevention.

"The Benton County Jail was one of the hottest spots when the virus was peaking last summer," Moehring said.

The jail was not designed to handle a pandemic, he said.

The expansion project would include a new intake area where detainees could be evaluated for physical and mental health issues and then sent to the appropriate areas, Moehring said. Anyone with medical issues or who tests positive for the virus can be sent to the medical area and be held in a holding room or isolation area, he said.

"We are envisioning an expansive facility," he said.

The new space would include multipurpose areas for flexibility in holding detainees during a pandemic, Moehring said. The plan also includes a sobering center and behavioral health center, Sheriff Shawn Holloway said.

Benton County Circuit Judge Brad Karren recommended the expansion project include at least three areas to allow judges to hold virtual hearings from the jail instead of going to the jail or bringing inmates to courtrooms.

"We are always tripping over each other" with circuit and district judges trying to conduct hearings from the jail, he said.

Rogers District Judge Chris Griffin agreed with Karren. He recommended having a room designated for Karren and another for Benton County Circuit Judge Robin Green. They are the two circuit judges who handle criminal cases.

The third area could be designated for bond hearings and the district judges, Griffin said.

Griffin said there are times he's had to conduct hearings by using a tablet in the jail's booking area, which is difficult because of all the activity and noise in the area.

Holloway said he envisions seven to eight areas in the jail where judges could conduct hearings with detainees. He said he believes it would prevent having to take inmates to a single court area, which could prevent the spread of a virus throughout the jail.

Holloway said one larger courtroom is needed for in-person hearings at the jail.

The Washington County Quorum Court at its Aug. 19 meeting moved forward with spending money from the federal American Rescue Plan on proposals to expand its jail and juvenile court facilities. The Quorum Court approved spending $250,000 for each of those projects on identical 11-4 votes.

The American Rescue Plan Committee will meet on the following tentative dates at the Benton County Quorum Courtroom at 215 E. Central Avenue to discuss the relief topics.

Print Headline: Expansion project will be presented to Benton County's justices of peace