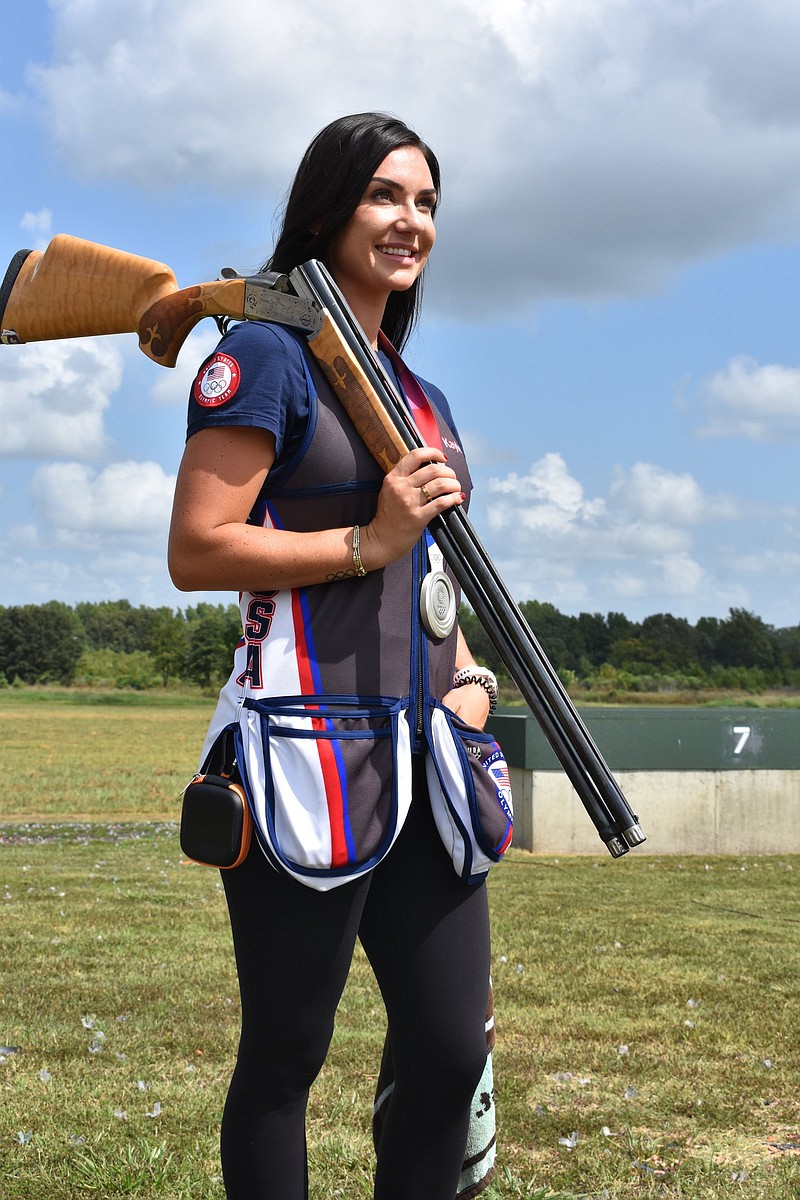 Captain America is a woman, and she lives in Wooster.

You can't miss her with her red, white and blue vest, but she packs a bigger punch than the animated character. Instead of a shield, she wields a Krieghoff K-80 12-gauge over/under shotgun with a birdseye maple stock.

Her real name is Kayle Browning, the only Arkansan who competed in the Olympic Games recently in Tokyo. She won a silver medal in women's trapshooting, and she's gunning for a gold medal in the next go-round.

Browning, 29, delighted a group of young female trapshooters Aug. 28 at the Arkansas Game and Fish Foundation's Shooting Sports Complex at Jacksonville, offering shooting tips to girls who idolize Browning. It took them a few shots to unwind their nerves, which wasn't surprising. Having an Olympic medalist looking over your shoulder can be daunting.

Like the youngsters at that event, Browning's journey began competing in the Arkansas Youth Shooting Sports Program, which the Arkansas Game and Fish Commission established in 2007. Browning distinguished herself in the program as an elite talent as early as 2008, and she quickly established an international resume.

"I shot my first American trap target in the Arkansas Youth Shooting Sports Program," Browning said. "They put me on a platform for these kids where they can say, 'Hey, here's a girl from Arkansas and she's doing it. We want to help her do it, and you can do it, too.' They've paved the way for youth, and I was one of those youth. What they invest in youth and hunting has been a huge influence on where I'm at today."

Because of the coronavirus pandemic, Browning's Olympics journey was turbulent. The 2020 games were postponed because of the pandemic. Team USA members didn't know if they would have to re-qualify.

"That was heartbreaking at first," Browning said. "You made it, and then everything got shut down. We didn't know if we'd get to keep our spots or if we'd have to have a retrial. Once we figured out that we'd get to keep our spots, then it was really just a moment of, kind of like, relaxation. I'd have a whole extra year to prepare. You don't have to rush it. Take your time and figure out what you want to do for your training plan and go from there. It was kind of like a blessing in disguise, really."

Despite the lack of spectators, Browning said the Olympics experience was electric. Everything was first-class, she said, and meeting so many athletes from around the world was exciting.

"All of the athletes from all the different countries were in the same village," Browning said. "I met swimmers. I met baseball players. I met track runners, surfers, you name it. It was pretty cool getting to know all those different athletes, and then watching them compete on the TV, it was like you had somebody to pull for. It was totally awesome."

The competition started rough for Browning. She missed three out of her first four targets. At a level where competitors seldom miss any, that could have been catastrophic. However, Browning hit her next 19 targets, missed two, and then hit 14 of her next 15 to tie with Zuzana Stefecekova of Slovakia. In a 10-target shoot-off, Stefecekova bested Browning by one target.

"That was 20-plus years of training and competition to get out of that," Browning said. "That could have easily been a situation where you're like, 'Oh, my gosh, I'm down three out of four! This is not good!' That's a prime example of how you cannot let a miss affect your next shot. You have to push through."

That's easy to say, but Browning said other competitors smell blood in the water when an opponent stumbles out of the gate.

"For sure they do, 100%," Browning said. "You have to be prepared to push through adversity. You can cause yourself to miss a target worrying about what they're doing, but that's something you can't control."

All athletes experience streaks and slumps, Browning said. She said that social media and promotional materials accentuate only success, but failure is equally important for building character.

"If you win every time, you don't learn how to compete," Browning said. "Failure is what shapes you and molds you. How you handle that failure, what you decide to do with it, that's how you keep advancing."

When a slump occurs at the beginning of what might be a once-in-a-lifetime event like the Olympics, you have to adjust quickly.

As failure can make a shooter anxious, taking success for granted can also make one complacent, and that can lead to failure, Browning said.

"I think the streaks might even be more dangerous than the slumps because when you get on that high and you're riding that wave for a little bit, you kind of lose your edge of competitiveness," Browning said. "If somebody's going through a slump and they're really working hard to get out out of it, and you're kind of coasting on your high, you kind of, I don't want to say you lose your work ethic, but you're not putting in what that guy in the slump's putting in. It's easy to kind of lose that edge a little bit and for the other guy to come up because they're working harder than you are."

Browning has a lot of inspirational visuals to help keep her focused. A small cross on her ankle represents faith. The Olympic rings are inked on her wrist, and they are embossed in gold on her shotgun's upper tang. The shotgun is conspicuous for its stunning beauty, but also for its lack of adjustable combs and butt plates that so many trapshooters use. Browning said she's had the same gun since she was 14 years old. The stock is customized, so she doesn't need all the adjustable accoutrements.