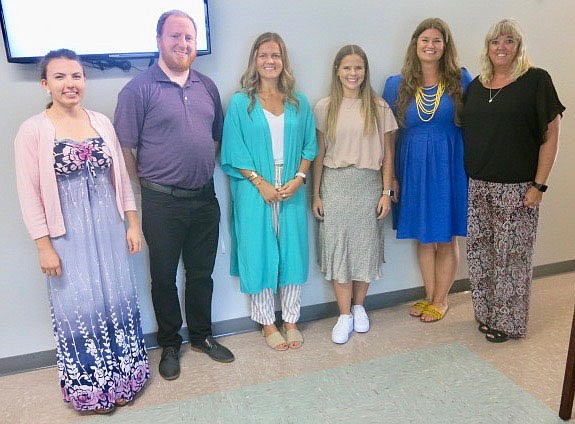 GRAVETTE -- All members were present for the regular meeting of the Gravette School Board on Aug. 16 at the school administration building.

Dennis Kurczek, business manager, gave the July financial report, including detailed changes in fund balances, and discussed the ESSER/ARP financial report. This is federal money, Kurczek explained, but disbursement is left up to the state. The district has had $24.2 million in revenue this year, he said, and operating expenditures are in line with the budget. He reported there are 48 students in the ABC PreK program and a "huge waiting list" of other students hoping to get in.

Mitchell reported $13,000 has been budgeted for the wrestling program, including $5,000 for uniforms, but since wrestling is a new offering, budgeting for that department has been "sort of a guess."

The athletic budget was approved.

Becky Sears, assistant superintendent, discussed the curriculum and instruction report. She said several virtual resources will be available and she plans to make them available for parents to access online.

Sears told about the new teacher training and PLC Institute Workshop, professional development in which the teachers participated. She said it was a very positive event and teachers were able to plan team goals for next year.

Kelly Hankins, director of Academic Success, presented the Academic Success report. She gave a quick update and said there were six virtual students. She said she is working with expelled students to make sure they keep up and is watching attendance closely, making sure everyone has what they need.

Robert Adams and Cody McCool, representatives of Crossland Construction, and Clay McGill, principal architect with BiLD Architect, gave a report on the remodeling project at Western Benton County Career Center. They reported having some issues with supply on major equipment, including supplies for the pharmacy classroom, and said some supplies are on backorder. Final inspection will be delayed until all equipment is received. Cost of lumber is going down, but cost of steel is up, they said.

Adams reported bids would be going out Tuesday for the renovation of the old ALE building, which is located behind the administration building. That building will house the school's Academic Success Center. Cost is expected to be between $425,000 and $475,000.

Childress gave a report on the American Rescue Plan budget. She said administrators will have to take the $2,176,298.60 total budget and allocate funds to various projects. Of that, $84,000 is being directed to a three-year attendance program, which will be tried through the 2021-2022 school year and then reevaluated to decide whether to continue. Another $10,000 is being allocated to materials and supplies for the Academic Success program and $125,000 for making updates in math, science and social studies curriculum. She said the district wanted to offer more summer school classes but couldn't find enough teachers to staff them.

Hope Duke urged her fellow board members to reach out to their legislators and ask them to try to assure that curriculum is not dictated on the federal level but that more control is left to those on the local level.

A brief discussion was held on the covid situation and mask mandating. Approximately 60 persons attended the special meeting to discuss covid concerns, and many more watched the meeting remotely. The majority of respondents were very positive and several complimented the district for proactively seeking input from patrons. Board president Jay Oliphant said he was disappointed there was no formal vote on masking since he felt it created confusion.

Oliphant said he felt it is important to clarify what numbers are significant, for example, how many positive cases would be needed before the district would impose a mask mandate. Duke said a mask optional policy was voted on in April and is currently in place. She expressed concern about where the spread of cases is coming from. Childress said the students who tested positive that day had come from the community rather than through school contacts.

Some discussion was held about further sanitizing, and Tracy Moorman expressed concern about whether there would be enough adults to supervise students if some teachers were out for quarantine. Childress said some of the newly hired interventionists would be available to cover the classrooms and told the board she would keep them updated on quarantine numbers and her recommendations.

Kurczek discussed the general operating fund budget. Board members voted to transfer $2,000,000 from the general operating fund to the building fund for the 2020-2021 fiscal year. This is to comply with the Arkansas Department of Education requirement that, if at the close of the fiscal year a school district has a net legal balance that exceeds 20% of the current year revenues, the district must reduce its balance to no more than 20% of revenues.

Board members also voted to sign the 2021-2022 Statement of Assurance verifying the district's compliance with Arkansas law as required by Arkansas Code.

Board members voted unanimously to authorize Childress to seek staff approval for a district-provided covid leave policy for the 2021-2022 school year. This will be a continuation of the policy in place last year, providing for 10 days of covid leave. Any days missed above 10 would come out of the employee's sick leave time. Employees can work remotely and there will be no differentiation between vaccinated and unvaccinated personnel.

Board members moved into executive session at 8:31 p.m. for the purpose of discussing employment. When they returned to open session at 8:52 p.m., they voted to hire Morgan Bayley as a kindergarten teacher at Glenn Duffy Elementary School and to hire Annie Lazure as an instructional assistant (paraprofessional) for special education.