Tight labor market leads to rethink of what’s needed in staffer by ANNE D’INNOCENZIO THE ASSOCIATED PRESS | September 3, 2021 at 1:59 a.m. 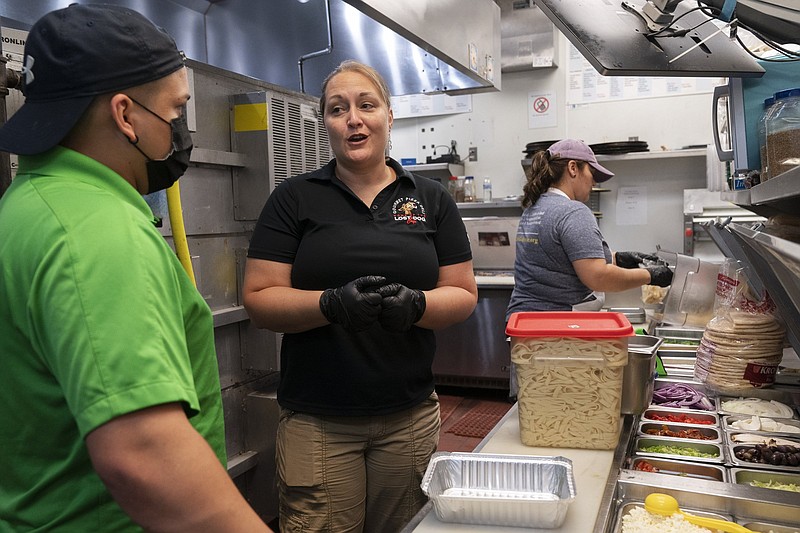 NEW YORK -- Landing a waitressing job or bartending gig at the Lost Dog Cafe in Northern Virginia had never been easy.

"Help Wanted" signs were a rarity, and half of the chain's staff stuck around for at least 10 years. The onset of the pandemic made job prospects even worse when Lost Dog had to temporarily shut down indoor dining.

But as vaccinated patrons rushed back to eat out and once-loyal workers moved onto new opportunities, the business began struggling in May to fill the roughly 20% in vacancies on its service staff.

To address the shortage, it did something it hadn't done before: look to people without experience. It also started recruiting workers under 18.

Lost Dog is one of a growing number of companies that, in a desperation for hired hands, is loosening restrictions on everything from age to level of experience. Drugstore chain CVS announced earlier in August that it would no longer require a minimum high school degree to fill entry level spots at its stores. This year, it also plans to end its GPA requirement of 3.0 when it recruits on college campuses. Meanwhile, Amazon has stopped testing job seekers for marijuana.

The changing standards may have helped boost hiring this summer, even as many companies complained that they couldn't find all of the workers they need. Employers added a hefty 940,000 jobs in June and July, lowering the unemployment rate to 5.4%.

The government today will release figures for August, and economists forecast that they will show another 750,000 jobs were added that month, with unemployment falling to 5.2%. Some analysts worry that job gains will come in lower because of the delta variant, but are optimistic about hiring in the fall.

The trend to relax the rules started about three years ago when the labor market started to tighten. It accelerated this spring when employers were caught flat-footed as Americans enthusiastically emerged from months of pandemic lockdowns, eager to shop and dine again. At the same time, workers were reevaluating their jobs and whether the long hours were worth the paycheck.

The perfect storm led to record job openings, which increased to 10.1 million in June from 9.2 million in May at a rate of 6.5% -- the highest since the Labor Department started tracking the numbers two decades ago. People voluntarily leaving their jobs increased to 3.9 million from 3.6 million in May.

Employers dangled incentives like higher hourly wages and extra bonuses but still had trouble filling openings. Data from various sources show that they are now more willing to let go of some restrictions that in the past have shut out certain populations from the workforce.

Job-hunting platform ZipRecruiter, which scrubs 16 million job postings of all types of work, says the percentage of jobs requiring bachelor's degrees fell from nearly 15% in 2016 to just over 11% in 2020. But that figure dropped even more drastically to 7% from January to June of this year. For the percentage of job listings requiring no experience, the figure went from roughly 9.2% in 2016 to 14.3% in 2020, and jumped again to 18.6% for the first six months of this year.

Experts say many of the restrictions were artificial barriers that perpetually kept out low-income workers, particularly people of color. Education requirements, for instance, tend to favor white workers over Black. Compared with 47.1% of white adults, just 30.8% of Black adults have earned some form of college degree, according to the Educational Trust, an educational nonprofit.

Delta Air Lines says 95% of its jobs in customer service no longer require four-year college degrees, up from 78% back in the first quarter of 2020. Ashley Black, director of equity strategies at Delta, said the move was not directly because of any labor shortages; rather, it was about finding the right talent for the job and the organization.

"Traditional hiring processes are highly subjective and can have multiple barriers that complicate access to economic opportunities for any potential talent," Black said. "Still, this disproportionally impacts people of color. Without being able to easily and credibly assess skills, implicit bias can shape the recruiting and hiring processes."

Sarah White, area manager for Lost Dog Cafe and a restaurant consultant, says the relaxed requirements have opened doors for job prospects who might have not been previously considered.

"We get locked in these ideas of what the job looks like," White said. "Now, we are getting people we wouldn't have hired before. And they have been some of the most amazing employees. It would have been our loss."

Karen Rosa, 32, started out as a server at the Lost Dog Cafe last September but then became a bartender without any experience. She says she can now pull in a steady $600 to $700 a week. She says her server's income was more volatile.

"They gave me a chance," she said. "They were very helpful."

But there are downsides, too. White says she's been so desperate at times she's had to hire some servers who have bad attitudes and have actually scared away customers.

"We don't have anyone to wait on them, but we are also losing them because they get service but it's from someone that I wouldn't want serving them," she said.

Daniel Schneider, professor of public policy at the Harvard Kennedy School, says the difficulties of finding good workers like servers underscores "a lie" that this is not skilled labor.

"Not just anyone can step into these roles," he said. "These are skilled jobs, and they should be compensated accordingly."

Companies say they're making up for the lack of experience by doing a better job with training. Lost Dog now trains cooks on different types of menu items every day and posts cocktail recipes on the back of the bar rail where customers can't see them.

CVS just opened two new workforce innovation and talent centers in Pittsburgh and Philadelphia, where it works with faith-based and community organizations to find, train and place workers in jobs such as pharmacy technicians and customer service workers.

No one can predict whether companies will go back to tightening requirements when they're flush with lots of job applicants again.

"Employers may decide there are other ways of actually screening employees that are more effective than looking at key words on their resume or do they pass this education or experience requirement," Hershbein said.

Information for this article was contributed by Alexandra Olson and Christopher Rugaber of The Associated Press.