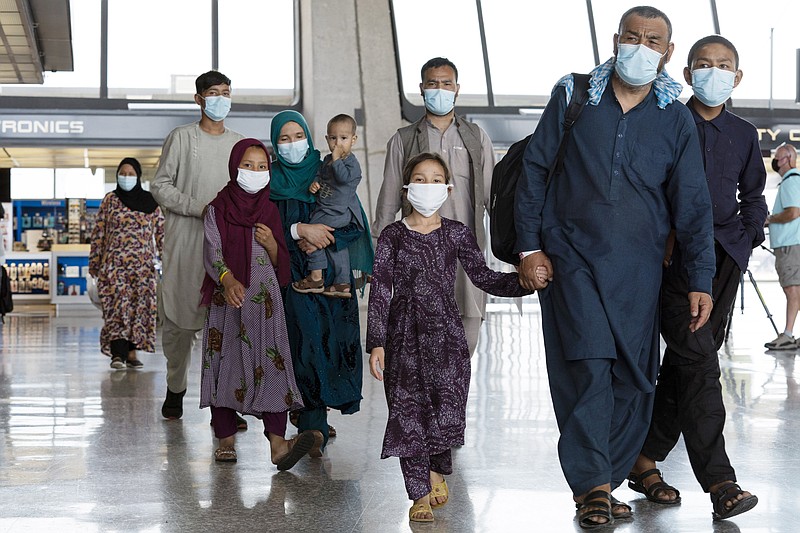 FILE -- Families evacuated from Kabul, Afghanistan, walk through the terminal before boarding a bus after they arrived at Washington Dulles International Airport, in Chantilly, Va., on Monday, Aug. 23, 2021. (AP Photo/Jose Luis Magana)

FAYETTEVILLE -- An as-yet unknown number of evacuated Afghans will arrive in Northwest Arkansas with as little as 48 hours notice after having escaped, in some cases, with nothing but the clothes on their backs, the executive director of a Fayetteville-based refugee assistance group confirmed Thursday.

Many refugees left with no time to go through the paperwork needed to make them eligible for Medicaid and other such public assistance or the $1,225 per person federal stipend normally available for refugees, said Joanna Krause, executive director of Canopy NWA.

Even those eligible for such aid still need help, she said. She asked those who would like to help to check her group's website at canopynwa.org .

"What we need most is to help identify housing options," Krause said. Even a spare room in a volunteer's home would help, she said.

All the refugees will need a friendly, welcoming face -- someone who can show them "where to shop for groceries or a park their kids can play in," she said. Canopy offers training for those wishing to volunteer.

"Some of them left without even getting to bring luggage," Krause said.

So clothing, food, financial assistance, transportation and other needs are expected, she said.

Canopy expects to know more about how many and when refugees will arrive by the end of the week, Krause said.

"It's not going to be a large number because we're a small community in a small state," she said.

Canopy has an Afghan on staff and is also helped by U.S. veterans of the conflict in Afghanistan, so a management team is in place to coordinate assistance, Krause said.

"We have a small, but thriving and strong Afghan population" in Northwest Arkansas, she said.