WHSD board chooses to keep its mask mandate despite critics 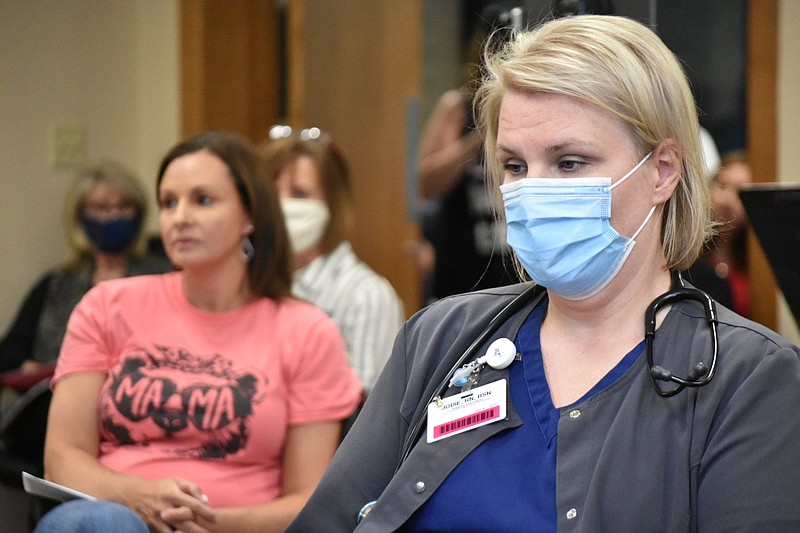 White Hall School District parents Laura Golden, left, and Jodie Howell, right, listen to arguments during a special meeting about the district mask mandate Tuesday at the district administration building. Golden filed a petition to challenge the mandate, while Howell voiced her support for the policy. (Pine Bluff Commercial/I.C. Murrell)

WHITE HALL — Following an hourlong debate from supporters and dissidents of the policy, the White Hall School Board voted unanimously to keep the district-wide mask mandate in place during Tuesday’s special board meeting.

“The issue for this meeting has been decided,” board President Dr. Raymond Jones said, weathering a threat from an opponent of the mandate who threatened to file a lawsuit against the White Hall School District, alleging the vote was illegal. It was not indicated on the board agenda whether a vote would be taken.

“Go right ahead, sir,” said Jones, a supporter of the policy since it was enacted during an Aug. 10 regular meeting. “You have every right.” The special meeting was scheduled after a petition led by district parent Laura Golden was filed in the district administration building on Aug. 23 in hopes of nullifying the mandate from Superintendent Doug Dorris, which requires students and staff members to wear face coverings on campus. Board members agreed during the Aug. 10 meeting to review the mandate after 60 days, but Dorris said after the meeting it is his understanding the review will not be necessary with Tuesday’s vote.

“I have to tell you I recommend we continue this mask mandate as we have it at this time, until the governing board decided it is not in the best interest of the district to continue the mask mandate,” Jones said.

A board member made a motion to accept Jones’ recommendation and another seconded.

Golden, a mother of four students in the district, asked the board to put medical and religious exemptions for the mandate in place, but to no avail.

Golden and other opponents of the mandate gave spirited 5-minute speeches, some alleging that the board did not have the right to require masks be worn.

“The fact is, these are my children, I’m their parent, it’s my decision — not yours — what’s best for them,” Golden said. “Now, due to a last-minute injunction by a rogue judge, Mr. Dorris and the school board based their decision on politics without any consideration of parents’ concerns, plus there’s no state or local mask mandate in effect.” A Pulaski County circuit judge on Aug. 6 issued an injunction that temporarily overturned a state law prohibiting school districts and other public entities from requiring constituents to wear masks. Golden said last week she followed guidance from State Sen. Trent Garner, R-El Dorado, who authored the bill that Gov. Asa Hutchinson signed into Act 1002, on how to petition the board for a hearing.

District parent Alissa Harris argued: “I am fully capable and confident to decide what is in the best interest of my child, and I refuse to co-parent with the government.” She then hoisted an oversized photo of her child’s soiled face mask from last Tuesday.

“You, members of the board, have decided that this is a healthy choice for my child,” Harris said. “She sneezed in this mask and was embarrassed, so she tried to clean it in the bathroom sink at school, and then she wore it wet for 4 hours.” Some of the supporters who spoke in favor fought back emotions, with some hailing the science behind preventative measures against covid-19 and one teacher stating her case for the effectiveness of in-person learning.

Jodie Howell, a registered nurse, said she never doubted the district would make the right decision for the “safety and wellbeing” of her child, who recently graduated from White Hall High and now attends college.

Masking during the pandemic, Howell said, “does not guarantee that our students and teachers won’t get infected with covid, but credible, scientific evidence shows that it greatly reduces the risk of transmission. There’s no debating this. There’s no ‘Science says one thing and science says the other thing.’ When you look at credible science, there’s no debating it. None of us can debate it.” Amy Kalkbrenner, who manages covid-19 case data for the White Hall School District, said in her support for the mandate that the district had 12 active positive cases as of 4 p.m. Tuesday — 10 students and two staff. One of the students, she said, was exposed at school.

There were 37 students and no staff members under quarantine. Eight of the students, Kalkbrenner said, were exposed at school.

“I was just looking at seating charts on our current positive students, just to get an idea of how many students we would have quarantined just this last week,” Kalkbrenner said. “It’s not an exact number, but it’s a rough estimate, and I estimate it would have been 135 students who would have gone home to quarantine for at least 10 days had we not had the mask mandate, all from classroom exposures. Our numbers will change.” Board members allowed a seventh supporter to speak, claiming the other six spoke within the 30-minute time-frame for each side. The man who later threatened a lawsuit against the district argued the dissidents weren’t given a seventh supporter, and Jones said time had expired for that group.

An eighth supporter yielded his time, saying he wanted to prevent an argument.