REVIEW: Come From Away at WAC 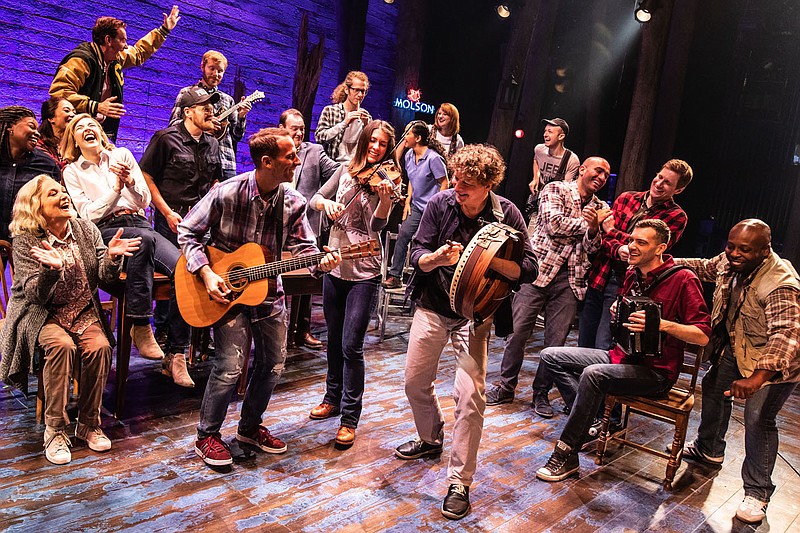 The first national tour of “Come From Away” is showing at the Walton Arts Center in Fayetteville through Oct. 31. All patrons age 12 and older are required to provide proof of full vaccination (final dose at least two weeks prior to the show). Vaccination cards, printed copies of vaccination cards or a photo on your device will be accepted. OR provide printed and dated proof of a negative covid-19 diagnostic test taken within 72 hours to attend a show. All patrons will also be required to wear a mask while inside Walton Arts Center. (Courtesy Photo/Matthew Murphy)

Walking back into the Walton Arts Center in Fayetteville on Tuesday night, Oct. 26, I could feel that I was trying to emotionally prepare myself. For what, I wasn’t entirely sure. But I knew it would be an emotional night.

Two days before the WAC closed its doors in March of 2020, I saw my last Broadway show. I hoped coming back to live theater would be thrilling and profound, but add to that a musical set during the week of 9/11 and its aftermath and, yeah. I was in for it.

In the opening number of “Come From Away,” the island natives in the small town of Gander, Newfoundland drop out of the vigorous, Celtic-tinged arrangement of “Welcome to the Rock” to a softly sung, piano-lead moment. “You are here, at the start of a moment, at the edge of the world,” they sing. And it may seem cheesy to say it, but it was the first moment of the show — less than three minutes in — that caught my breath.

It did feel like I was at the start of a moment. A moment of coming back to this beautiful thing I love, a shared experience that has been missing from my life for more than a year and a half. And how many times over those past 19 months have I felt, emotionally, at the edge of the world? It was just a few short words, and I’m sure I’m not doing justice to the feeling of that moment, but already, I could sense what WAC Vice President of Programming and Executive Producer Scott Galbraith posed when the show was announced:

“It, ironically, is about a group of people coming through the other side of a tragic experience. And that is exactly where we are again now. So for us to be able to reopen our Broadway series with a piece that is so poignant, so relevant, and so joyous…we [are] absolutely thrilled.”

It’s not a bad cry, though, actor Julie Johnson assured me when we spoke the morning after opening night. “It’s cathartic and it also reminds you that life goes on,” she says of the story.

“Come From Away” opened on Broadway in 2017 and launched its first national tour the following year. For some 100 minutes, the intimate cast of 12, sparse setting and driving music effectively transports the audience to that tiny island where 38 planes were diverted on the morning of Sept. 11, 2001 when the United States closed its airspace. The town’s population nearly doubled in a few short hours as the townspeople scrambled to find food, shelter, medicine and any other needed supplies for 7,000 strangers from around the world.

The cast perform multiple roles between the islanders and the “plane people,” as they’re called, and the musical shares a completely different situation than most of us remember living through in the wake of the tragedy.

The stories are true. The characters are composites of a few people, or, as with Captain Beverley Bass, are direct interpretations of a real person. Some of the words the characters speak come, almost verbatim, from writers Irene Sankoff and David Hein’s interviews with the people who lived the experience. And for me, that made every moment all the more charged, all the more heart breaking, all the more inspiring.

As expected, there are a few moments in the show that feel like a gut-punch. Like the floor has fallen out from under you. But it’s not a 9/11 show. It’s a show about the best of humanity and how they came together to make it through an unthinkable situation.

Marika Aubrey as Captain Beverley Bass has a powerhouse moment with her song “Me and the Sky,” detailing the journey she took to become the very first female captain for American Airlines, to the call she got that would ultimately ground her Paris-to-Dallas flight in Gander.

Kevin Carolan as the town mayor; Julia Knitel as the reporter at her very first day on the job; Sharriese Hamilton as the mother desperately trying to get information on her New York City-based firefighter son, and truly every other character actualize the weariness, the fear, the confusion, the empathy and the love for your fellow human that manifested in those days of uncertainty.

What was unexpected was the way my heart swelled and the emotion with which I was overcome after the final bow had taken place. The lights were up and the musicians were given a moment to shine after the actors had left the stage. Everyone was out of their seats, enthusiastically clapping along. And looking around the sea of masked faces, a room of some 1,200 people engaging with the same piece of art I had just experienced too, I was moved in a way I haven’t felt in more than a year and a half.

FYI — Proof of full covid-19 vaccination or negative covid test dated within 72 hours of performance is required for entry. Masks are required inside venue.

FYI — The performance runs approximately 100 minutes without an intermission.