The nation in brief: Man wrongly jailed 23 years gets $25M 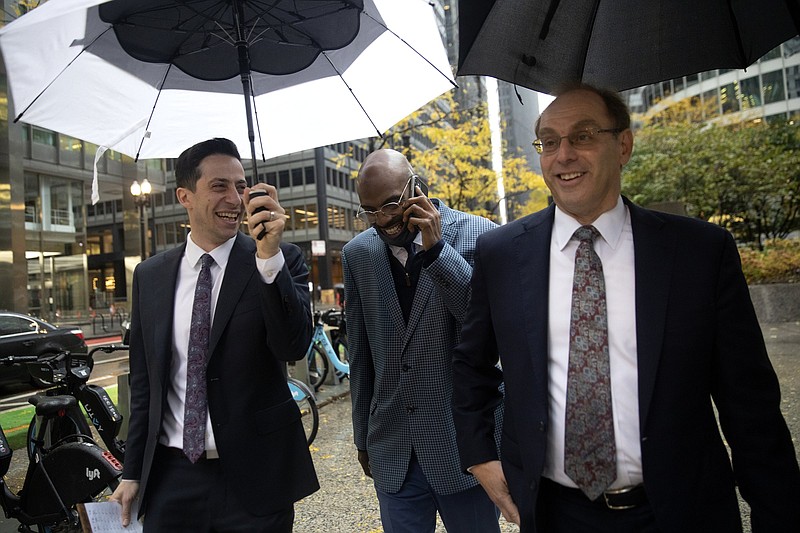 Eddie Bolden, flanked by attorneys Eli Litoff (left) and Ron Safer, talks to his aunt Friday as he leaves a courthouse in Chicago after being awarded $25.2 million in a wrongful conviction case. (AP/Chicago Tribune/Erin Hooley)

CHICAGO -- A federal jury Friday awarded more than $25 million to a man who sued the city of Chicago and two police detectives after being wrongfully convicted of murder and spending nearly 23 years in jail.

Eddie Bolden, 51, was freed from prison in 2016, two years after an appellate court found that his trial attorney was ineffective. The Cook County state's attorney's office dropped the case rather than put Bolden on trial again and he was granted a certificate of innocence, allowing him to receive state payment for his time in prison.

Jurors ordered the city to pay $25 million in compensatory damages, and the two surviving police detectives to pay $100,000 in punitive damages.

Bolden's lawsuit alleged that he was framed in the killings of two men. Bolden's attorney, Ron Safer, told jurors that police had no evidence that he was involved in the drug deal that led to the killings.

But attorneys for the city and detectives argued during the federal trial that Bolden's criminal trial was fair and that he's guilty of the 1994 murders.

A spokesperson said Chicago's Law Department "is reviewing the verdict and is assessing its legal options."

James, 62, announced her candidacy on Twitter, saying, "I'm running for Governor of New York because I have the experience, vision, and courage to take on the powerful on behalf of all New Yorkers."

A campaign video cited the multiple lawsuits she filed against former President Donald Trump's administration and an investigation into deaths in New York's nursing homes during the covid-19 pandemic.

James is the first woman elected as New York's attorney general and the first Black person to serve in the role. She's expected to be a strong challenger against Gov. Kathy Hochul, who had been Cuomo's lieutenant governor, for the Democratic nomination.

Hochul, who is from the Buffalo area, entered office with a reputation as a centrist who is working to bolster her ties to New York City, where James' political support is based.

James was born and raised in Brooklyn, and made her first run for City Council as a candidate of the liberal Working Families Party.

ALEXANDRIA, Va. -- A Dutch woman charged seven years ago with raising money for the Somali terrorist group al-Shabab has been extradited to the U.S. to face trial.

Farhia Hassan, 38, made an initial appearance Friday in U.S. District Court in Alexandria after being brought to the U.S. on Thursday on charges of conspiring to provide material support to a terrorist organization. She was ordered held pending her next hearing.

Prosecutors say Hassan helped raise money by telling donors it would fund schools and aid orphans when it was actually going to terrorists. The indictment alleges that al-Shabab cells in Nairobi, Kenya and Hargeisa, Somalia, received payments over a period from 2011-14.

In fighting extradition, her defense lawyers argued that the U.S. lacked jurisdiction to charge a Dutch woman with giving money to a Somali terrorist group.

But Judge Anthony Trenga ruled last year that the case could move forward because several of Hassan's co-conspirators were based in the U.S., and that the U.S. has a legitimate interest in prosecuting supporters of a group designated as a terrorist organization.

Librarians in clear over sex-ed books

The three books in the teenager section and one in the children's section are among dozens contested at the library in Gillette in recent weeks. Library officials have been reviewing the complaints.

One couple went further, bringing five books to the attention of the Campbell County sheriff's office in September. Sheriff's officials referred the matter to county prosecutors, who asked a prosecutor in a neighboring county to handle the matter to avoid a potential conflict of interest with fellow county officials at the library.

However, Weston County Attorney Michael Stulken wrote Campbell County Sheriff Scott Matheny that four of the books aren't obscene and having them in the library youth sections isn't engaging in "sexual intrusion" under any Wyoming law that conceivably could apply.

Stulken's opinion appeared to be thoroughly researched, the library's executive director, Terri Lesley, said Thursday. "I'm happy to have this decision made so that we can move on," Lesley said by email.