3 Starbucks set for vote on union 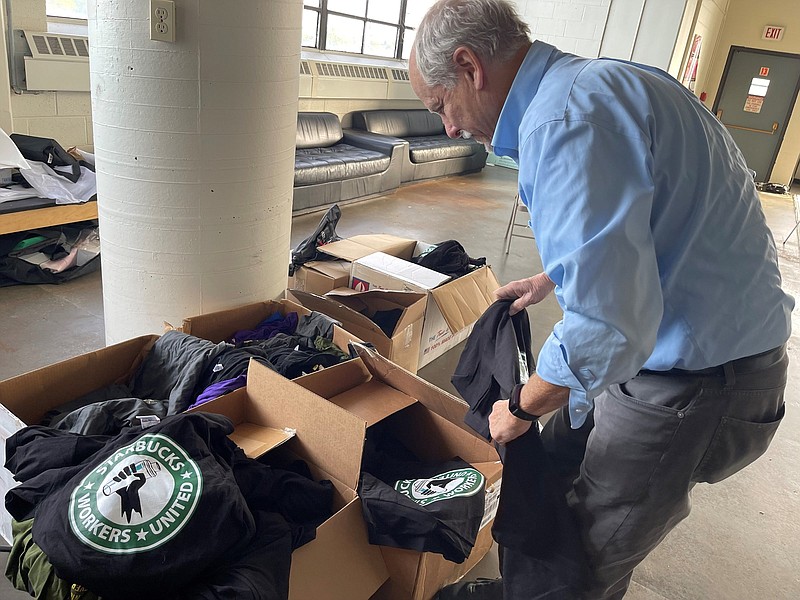 Richard Bensinger, who is advising unionization efforts, looks at Starbucks Union T-shirts inside the movement’s headquarters in Buffalo, N.Y. Workers at three Starbucks stores in Buffalo will hold union elections next month after winning a case before the National Labor Relations Board. (AP/Carolyn Thompson)

Workers hoping to unionize Starbucks stores in the U.S. have won a preliminary victory before the National Labor Relations Board.

The board said employees at three separate Starbucks stores in Buffalo, N.Y., can hold union elections in November in a new ruling. That means that workers need only a majority of votes cast at a single location to form a union. The company had argued that employees at all 20 Buffalo-area stores should vote in a single election.

If the effort is successful, the stores would be the first of Starbucks' 8,000 company-owned U.S. stores to unionize. The Seattle coffee giant opposes the unionization effort.

Starbucks said Thursday evening that it had just received the ruling and was evaluating its options. The company reported record fiscal fourth quarter revenue of $8.1 billion Thursday and had announced a $1 billion effort to raise U.S. workers' pay.

All hourly employees will be paid at least $15 an hour, and the company will raise its average pay to $17 an hour by the summer of 2022. Employees with two or more years of service could receive up to a 5% raise starting in January. Workers with five or more years of service time could receive up to a 10% raise. On Thursday, Starbucks reported record revenues for its fiscal fourth quarter.

"Our storied success has come from our working directly together as partners, without a third party between us," Starbucks said Thursday in a statement. "We remain focused on supporting our partners as well as maintaining open, transparent and direct conversations throughout the process."

The labor board said the union elections will be held by mail-in ballot between Nov. 10 and Dec. 8. The board will count the ballots Dec. 9.

There are about 128 employees at the three stores that will vote, according to the board's announcement of the decision.

"It's been disappointing to see Starbucks working overtime to try to stop us from organizing, but today's decision is a big win and soon we're going to have an even bigger victory when we vote our union in," said Michelle Eisen, an 11-year veteran of Starbucks in Buffalo and a member of Starbucks Workers United, the union organizing group.

The company has denied that it was seeking to delay the elections and argued that workers at all 20 stores should vote together because they can work at multiple locations and because upper-level managers oversee decisions across a range of stores. The labor board official, an acting regional director, rejected those arguments.

Starbucks can still appeal the ruling to the labor board in Washington, a move it did not rule out.

Starbucks Workers United has the backing of the broader Workers United union, which represents 86,000 U.S. and Canadian workers in food service, textiles and other industries. Workers United is an affiliate of the Service Employees International Union.

Employers in the United States are struggling to fill some jobs, with workers still sidelined by the pandemic or rethinking their ambitions. A record 4.3 million people quit their jobs in August, the Labor Department reported recently. That was up from 4 million in July and is by far the most in the two decades the government has been keeping track.

"Obviously like all other retailers we are navigating a very complex and unprecedented environment, and yes we have seen some staffing challenges in certain parts of the country," John Culver, Starbucks group president for North America, said during a conference call Thursday. Culver noted that the company had adjusted store hours to "redeploy staffing into other stores where we need it."

The Starbucks unionization effort comes amid a broader wave of union activity around the U.S. More than 10,000 Deere & Co. workers went on strike earlier this month after the United Auto Workers rejected a contract offer, while 1,400 workers walked off the job at Kellogg Co.'s U.S. cereal plants.

Information for this article was contributed by Dee-Ann Durbin of The Associated Press and by Noam Scheiber and Coral Murphy Marcos of The New York Times.