Arkansas universities yet to act on Biden vaccine edict 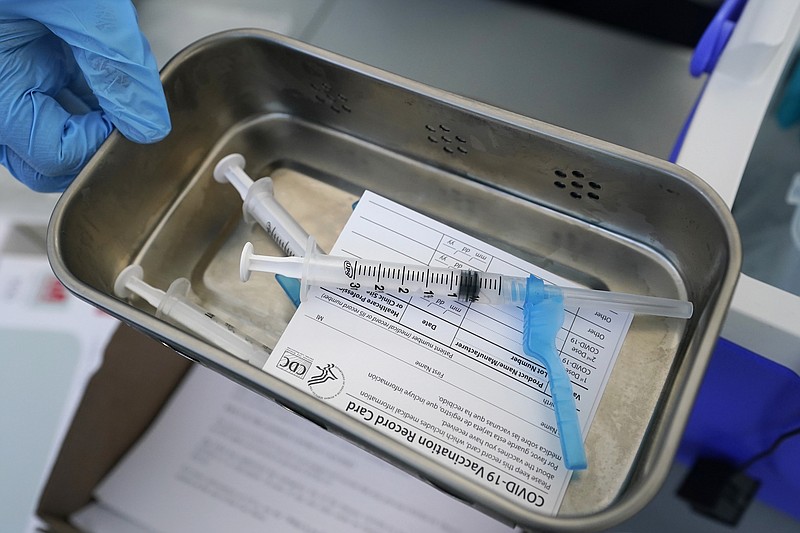 About $120 million in University of Arkansas System federal contracts "may be subject" to an executive order from President Joe Biden that imposes covid-19 vaccination requirements on contractors, a UA System spokesman said Wednesday.

"As we continue our analysis of the federal requirements -- along with the related laws recently passed by the state legislature -- we will be advising our campuses about how to approach each contract moving forward," UA System spokesman Nate Hinkel said in an email.

Hinkel did not say whether requiring some or all employees to get vaccinated against covid-19 is under consideration.

The federal executive order, announced Sept. 9, states that federal contractors must adhere to guidelines that, as published Sept. 24, state that "contractor employees must be fully vaccinated no later than December 8, 2021."

The federal safety guidelines define a person as "fully vaccinated" two weeks after receiving the second dose of a two-dose vaccination series or two weeks after a receiving a single-dose vaccine. The deadline to comply with the Dec. 8 requirement with the Moderna vaccine passed on Wednesday, based on the schedule for administering the two doses in the sequence 28 days apart.

Biden's executive order applies to new contracts but also to the extension or renewal of existing contracts. Generally, the contracts must also be for more than $250,000.

Spokespeople for the ASU System, the University of Central Arkansas and Arkansas Tech University also stated Wednesday that officials were still evaluating the executive order.

A statement from ASU System spokesman Jeff Hankins referred to at least potentially having contracts affected by the executive order.

"We are still evaluating the order, our federal contracts that could be impacted and our options for moving forward," Hankins said in an email.

Sam Strasner, a spokesman for Arkansas Tech University, said the university "is in the process" of reviewing the executive order "and how its provisions may apply to any applicable federal contracts between ATU and the U.S. government."

The UA System is the state's largest university system and, based on contracts information published by the federal government at USASpending.gov, is likely the recipient of more federal contracts than other state universities.

The Biden executive order specifically excludes grants, but examples of university federal contracts include some research work done on a contract basis.

For example, the USASpending.gov database includes a research and development contract between the Department of Defense and the UA System of up to $1.2 million, set to run from 2020 to 2023 for work on "machine learning for multimodal sensing and multilevel fusion data analytics."

"We are in the process of reviewing the executive order and guidance, and estimating the potential impact on our campuses and employees," Hinkel said. "We have initially estimated that roughly $120 million in current federal contracts may be subject to the requirements."

The executive order from Biden, a Democrat, has drawn criticism from Republicans in Arkansas and in nearby states that, like Arkansas, have mostly Republicans as elected officials.

Yet large public universities in some -- if not all -- of these nearby states have announced steps toward compliance with the executive order.

The University of Tennessee System on Oct. 21 announced that it "appears as though" it is required to ensure that employees working on federal contracts covered by the executive order are vaccinated no later than Dec. 8. But, unlike some universities, the University of Tennessee System stated that individual campuses were to "make the determinations as to which employees and locations are subject to the vaccine mandate."

The University of Mississippi on Monday announced that "all University employees (including faculty, staff, graduate and undergraduate student employees) must be fully vaccinated by Dec. 8," also stating that employees must provide proof of vaccination.

Unlike in Arkansas, the state of Mississippi has a single oversight board for all public universities, and University of Mississippi Chancellor Glenn Boyce's announcement of the vaccination requirements cited a vote by the Mississippi State Institutions of Higher Learning board of trustees.

Hinkel acknowledged the announcements made elsewhere.

"While we are aware that universities in other states have issued vaccination mandates for all employees as a result of the order, we must consider how we proceed in light of the circumstances that are unique to Arkansas," Hinkel said.

Mississippi does not have a law similar to Act 977, but Tennessee Gov. Bill Lee in May signed into law a prohibition on state agencies requiring covid-19 vaccination, according to the National Academy for State Health Policy.

Auburn University in Alabama on its website Friday posted an announcement that it and the University of Alabama System would be requiring employees to get covid-19 vaccinations, with the announcement referring to how jobs were on the line.

"Because this vaccination requirement is mandated by the federal government, our institutions do not have flexibility in its application or enforcement. Failure to comply will place our universities in jeopardy of losing hundreds of millions of dollars received through federal contracts and awards, as well as thousands of jobs funded by those dollars. This outcome would severely impact our institutions' teaching, research and service capabilities and could hamper economic development activity," the statement read.

The Biden executive order applies broadly to federal contractors, including small businesses. Vaccine exemptions may be required for employees with disabilities or strongly held religious beliefs, according to the federal guidance.