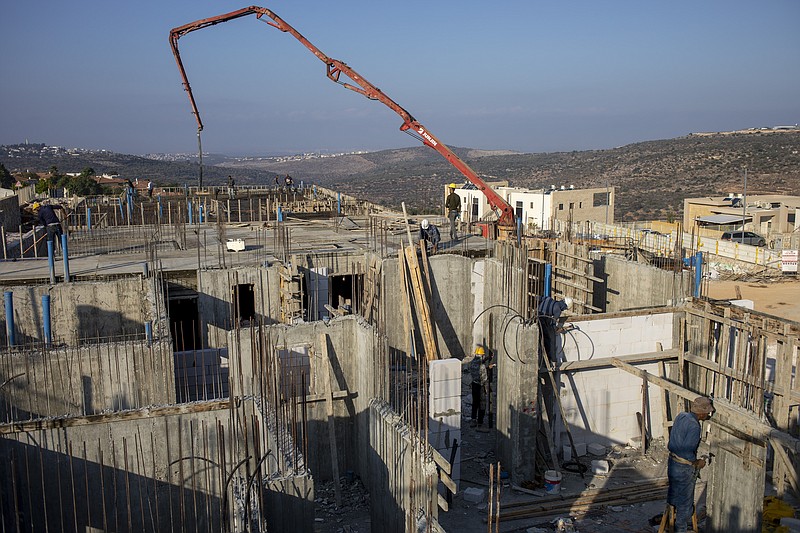 FILE - In this Monday, Oct. 25, 2021 file photo, Palestinian laborers work building new houses in the West Bank Jewish settlement of Bruchin near the Palestinian town of Nablus, Monday, Oct. 25, 2021. An Israeli settlement monitor said Wednesday that Israel has approved about 3,000 settler homes in the occupied West Bank. The decision by a government committee came a day after the Biden administration issued its strongest condemnation yet of the proposed construction. (AP Photo/Ariel Schalit, File)

JERUSALEM -- Israel approved about 3,000 new settler homes in the occupied West Bank on Wednesday, a day after the United States issued its strongest rebuke yet of such construction. It was the biggest announcement of settlement plans during the Biden administration.

The plans were approved by a Defense Ministry committee, according to a security official who was not authorized to speak publicly and did not provide details. The anti-settlement group Peace Now also confirmed the approvals.

Palestinian President Mahmoud Abbas called on the international community to take a "decisive stance" on the Israeli decision, which he said amounted to a "message of disdain for the efforts of the U.S. administration."

The Trump administration had tolerated settlement growth and abandoned the decades-long U.S. position that the settlements were illegitimate. Israel embarked on an aggressive settlement spree during the Trump years, advancing plans for more than 12,000 settler homes in 2020 alone, according to Peace Now, the highest number since it started collecting data in 2012.

Thousands of supporters of an outlawed radical Islamist party rallied on a highway in the town of Sadhuke as they marched toward the capital, Islamabad. They demanded the expulsion of France's envoy to Pakistan over publication in France of caricatures of Islam's Prophet Muhammad.

The violence started a day after the government of Prime Minister Imran Khan said it would not accept the Islamists' demand to close the French Embassy and expel the French envoy. Khan's decision infuriated supporters of the Tehreek-e-Labiak Pakistan party, who over the weekend suspended their march to Islamabad to give the government three days to consider their demands.

Also Wednesday, Information Minister Fawad Chaudhry said at a news conference that Saad Rizvi's TLP party will now be treated as a militant organization. He said violent activities of Rizvi's party would not be tolerated and the TLP cannot blackmail the government. Rallygoers have also been demanding Rizvi's release from prison. He was arrested last year during previous protests against France over the caricatures.

A toddler born during her mother's journey from Cameroon to Europe must be registered in Spain to prevent the child from being declared stateless and to guarantee her full rights under Spanish law, a judge has ruled.

According to court documents seen Wednesday, the girl's March 27, 2020, birth in a hospital in Oran, Algeria, was never recorded by Algerian authorities.

The mother and daughter arrived in Spain when the child was 1 year and 2 days old. The pair have lived since then in a humanitarian reception center in the southern province of Cordoba. A DNA test confirmed the woman is the toddler's mother.

Judge Francisco Ortega said "registration is directly required by the international norm that obliges states, including Spain, to immediately register any child born who has not been previously registered in another state."

Lorena Garcia, a lawyer who advised the public prosecutor's office in the case, said the judge's order was a first for Spain. "If you do not exist, you are not a beneficiary of any rights, and no one can protect you," she said.

Iran to return to nuclear talks in weeks

ISTANBUL -- Iran has agreed to return to nuclear negotiations in Vienna by the end of November, Tehran's top negotiator said Wednesday, signaling the possible revival of talks aimed at restoring the 2015 nuclear deal that have been stalled for months and surrounded by uncertainty.

In a message posted on Twitter, Deputy Foreign Minister Ali Bagheri, who has been meeting with European diplomats in Brussels, said the exact date of the negotiations would be announced next week.

Bagheri said he had engaged in "very serious and constructive dialogue" with Enrique Mora, the European Union's deputy secretary general for political affairs, "on the essential elements for successful negotiations."

Iran suspended the negotiations in June after the election of its new president, Ebrahim Raisi, a hard-line cleric. For months, his government has said it would return to the negotiating table but declined to set a date, feeding a growing sense of pessimism and alarm over whether the restoration of the nuclear deal was still possible.

President Joe Biden promised to reenter the accord, and negotiations started in April. Iran refused direct talks with the United States, and European partners have acted as go-betweens for the two delegations. 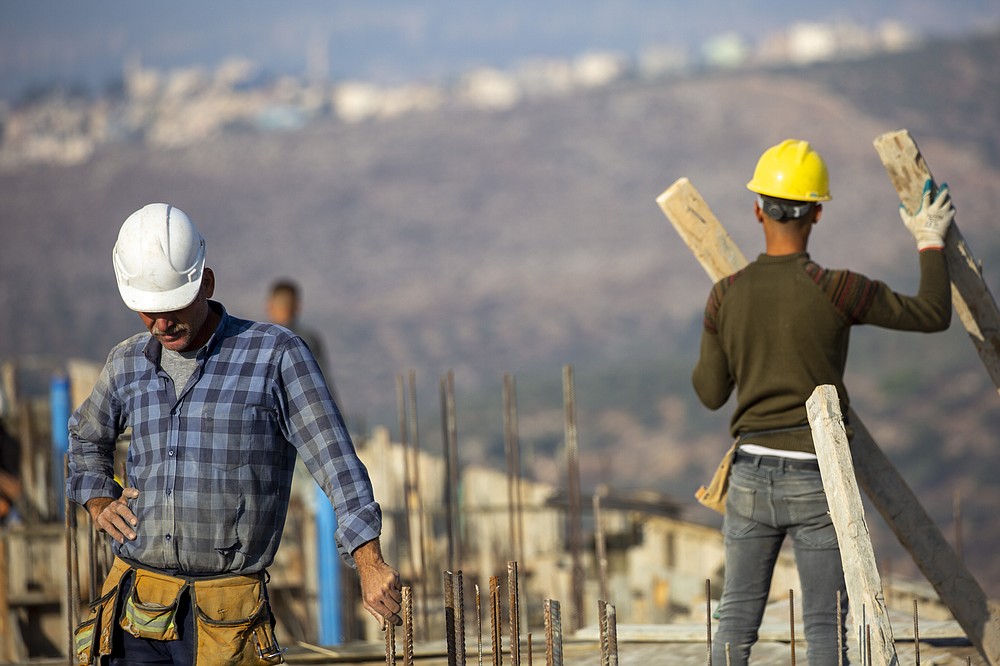 FILE - In this Monday, Oct. 25, 2021 file photo, Palestinian laborers work building new houses in the West Bank Jewish settlement of Bruchin near the Palestinian town of Nablus, Monday, Oct. 25, 2021. An Israeli settlement monitor said Wednesday that Israel has approved about 3,000 settler homes in the occupied West Bank. The decision by a government committee came a day after the Biden administration issued its strongest condemnation yet of the proposed construction. (AP Photo/Ariel Schalit, File)