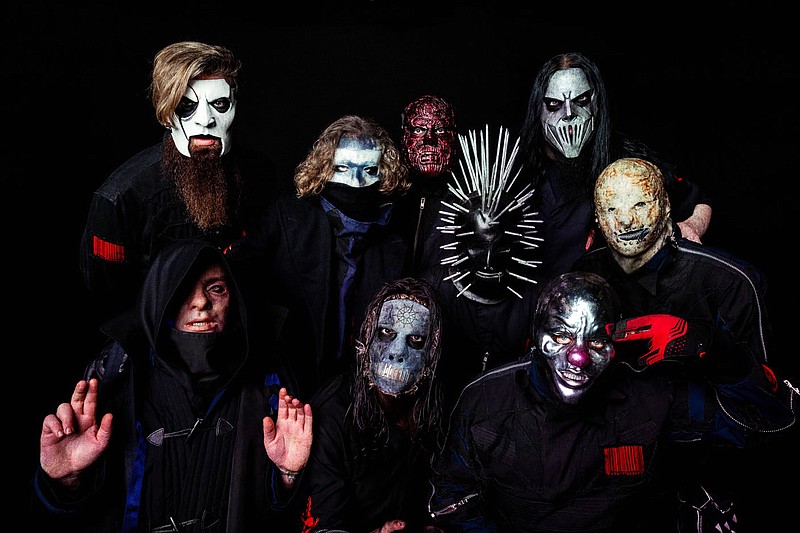 Whatever the general perception may be of whether a hard rock fanbase exists in Arkansas, Brian Crowne, vice president of the Walmart Arkansas Music Pavilion in Rogers, reveals that each year when the venue announces its one or two metal/hard rock shows of the season, fans come out of the proverbial woodwork in anticipation of that night.

"Especially when we announced Slipknot, my phone blew up with some of my friends in the harder rock world going, 'Oh my God, I cannot believe Slipknot's coming!'" Crowne remembers.

"This music is, it runs deep with a lot of people and we understand that," Slipknot drummer Jay Weinberg confirms. Geography is no indication of the size, age or enthusiasm of the crowds the metal outfit encounter on the road. "And when we hit it, we want to hit it hard for not just ourselves, but for everybody coming out. So now we're thrilled to come out to Rogers and cave that place in."

The iconic hard rock music collective closes out the Walmart AMP 2021 season with their annual (barring last year) Knotfest Roadshow -- a self-curated touring festival encounter "designed as an immersive, unforgettable, 'dark carnival experience,'" and celebration of the all-encompassing culture Slipknot has spawned through their art. Knotfest has grown to become the largest hard rock and metal festival in the world, spreading across four continents.

"Covid notwithstanding, my own personal approach is that every show has to be bigger and better than the one before it, so that's kind of always been the attitude around here, is that we're never truly satisfied with anything," Weinberg shares. "Slipknot is its own kind of entity that kind of hovers over all of us. It demands a lot, and to give it what it needs, it requires everything from us. And it wants more and more each time we do it, so I think it's just been a matter of making it the best it possibly can be."

Weinberg joined the pioneering metal rockers at the end of 2013 when founding drummer Joey Jordison left the band. Despite growing up as the son of prolific drummer Max Weinberg -- best known as the longtime drummer for Bruce Springsteen's E Street Brand -- Weinberg reveals the musician's life wasn't something he initially gravitated toward.

After picking up the guitar and some bass, though, Weinberg turned his sights to the family's legacy instrument. At the end of 2020, he was named the world's "Best Metal Drummer" for the fourth consecutive year on popular music site MusicRadar.

"Truthfully, when I first got asked to play with Slipknot, they wouldn't tell me what I was actually auditioning for -- it was a secret," Weinberg says. "But when we got into a jam room and there's a drum set and I'm auditioning for Slipknot now, I was drawing on muscle memory from teaching myself how to play along their records when I was 14, 15 years old."

As for filling the shoes as the newest, and youngest, member of such a prolific band, "the name of the game really was, it's almost like just bring your own shoes, you know?" Weinberg reminisces. "They understood that I knew the band inside and out because there's been a friendship there going back to when I was 10 years old.

"Slipknot was the band that really, I felt, took me under their wing as a young person, and never really treated me like a kid," he goes on. "I think my passion for the music -- my passion for this band in particular -- they knew that. And I feel like we started off on a good foot and that encouragement was really great, because Slipknot was entering this new phase and new art, new music. So to be invited to be a part of that was huge responsibility, and I think they knew that I would treat it like a huge responsibility. and it still is to this day.

"Every opportunity that we have to play this music just for ourselves or for other people, it really means a lot to me. I think they knew that on day one, and like anything in true Slipknot fashion, it's just been 100%, all the time. And I wouldn't expect anything less at this point."