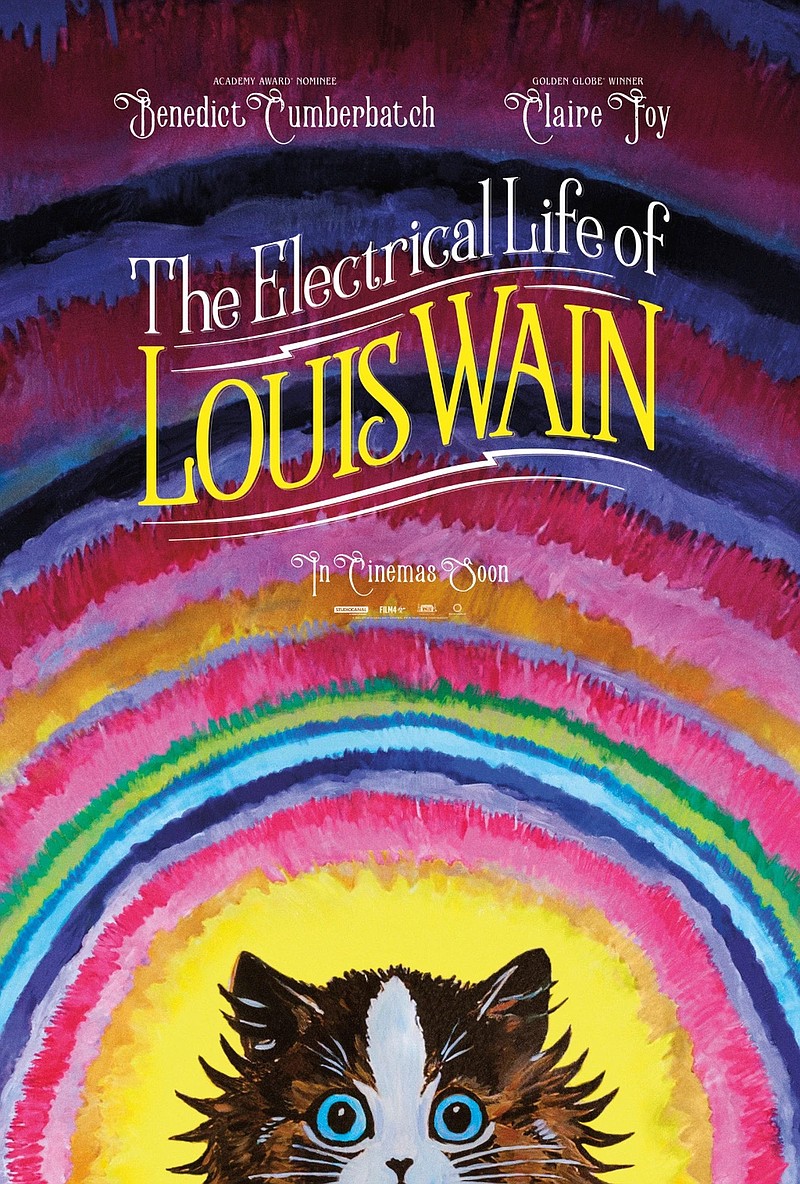 The Electrical Life of Louis Wain

"The Electrical Life of Louis Wain" (PG-13, 1 hour, 51 minutes, in theaters now; on Amazon Prime Video Nov. 5) An uneven if whimsical bio-pic in which Benedict Cumberbatch stars as Louis Wain, an eccentric and ultimately unbalanced artist whose fantasy images of cats reveal his curious fascination with the mysteries of the world, which he coped with in unique ways (to put it mildly). With Taika Waititi, Claire Foy, Nick Cave, Olivia Colman, Andrea Riseborough, Toby Jones, Aimee Lou Wood; directed by Will Sharpe.

"No Man of God" (not rated, 1 hour, 40 minutes, DVD, Blu-ray) Serial killer Ted Bundy (played with finesse by Luke Kirby, who makes the case for watching this edgy dialogue-driven drama), who is sentenced to death by electrocution in 1980, agrees to disclose the details of his crimes, but only to one man: FBI analyst Bill Hagmaier (Elijah Wood), who develops a relationship with Bundy that neither man expected. Based on transcripts of interviews between Hagmaier and Bundy. With W. Earl Brown, Aleksa Palladino, Robert Patrick; directed by Amber Sealey.

"Found" (PG, 1 hour, 37 minutes, Netflix) This effective documentary from Amanda Lipitz examines connections between family and identity by following American teenagers Chloe, Sadie and Lily, each adopted from China, who discover via DNA tests that they are cousins; upon meeting online, they confront complicated and emotional questions, and embark on a journey to China together in an effort to meet their birth parents.

"Sadar Udham" (unrated, 2 hours, 44 minutes, Amazon Prime) This underplayed bio-pic traces the journey of revolutionary Indian freedom fighter Sandar Udham Singh, who travels to London and assassinates Sir Michael O'Dwyer, former lieutenant governor of the Punjab in India in 1940, who was responsible for the Jallianwala Bagh massacre that happened in April 1919 and killed between 391 and 1,000 people. With Shaun Scott, Vicky Kaushal, Banita Sandhu, Amol Parashar; directed by Shoojit Sircar. In Hindi with subtitles.

"Civil War (or, Who Do We Think We Are)" (not rated, 1 hour, 40 minutes, premieres Sunday on MSNBC) Directed by Rachel Boynton and executive produced by Henry Louis Gates Jr. and Sam Pollard, this gripping, provocative, and brutally honest documentary looks at how Americans tell opposing versions of the legacy of the Civil War. Filmed from the last year of Barack Obama's presidency through the present, it offers insights and interviews from the north and south of the U.S. to present a multi-faceted portrait of the national narrative, including coverage of stories that many refuse to tell.

"Virtually Single" (YouTube) A unique nine-episode comedy series (with scripted and unscripted elements) follows the rocky road of a newly divorced mom sliding into the online dating pool for the first time in 10 years. It's written and produced by Kate Sargeant, who stars in the series she made from her home with clips from her real-life coaching sessions with an intimacy expert, conversations with her family, and some romantic connections. With Ed Quinn, Shontae Saldana, Garland Scott, Ayla Rose Barreau, Bryan Forrest; directed by Kristina Lloyd and Johnny Ray Gill.