Count of injured up by 2 in weekend Pine Bluff gunfire 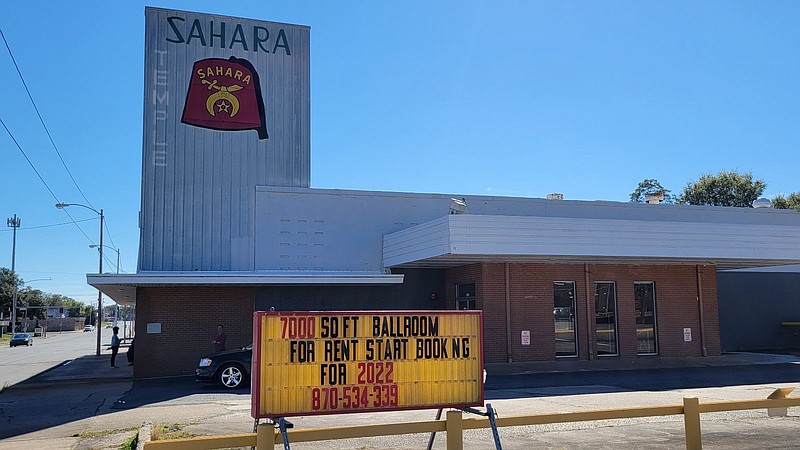 The Sahara Temple in Pine Bluff, pictured Sunday, Oct. 17, 2021, was the scene of two shootings, one of them involving a Pine Bluff Police officer outside the building and another where eight persons were found shot inside. (Pine Bluff Commercial/I.C. Murrell)

The number of victims injured during two shootings early Sunday in Pine Bluff has increased from 12 to 14 and police say it's possible the number could rise again.

"We could have some pop up in the future who went to other hospitals and we don't know about it yet," Pine Bluff Police Department Lt. David Defoor said Thursday.

At this time, police believe there were 10 people shot during a mass shooting that broke at a fraternity event held at Sahara Shrine Center and four people shot an hour later at the intersection of University Drive and West Pullen Avenue. Pine Bluff Police Chief Lloyd Franklin Sr. previously said the events do not appear to be connected.

Two men in their 20s are dead and two other victims remain in critical condition, police say.

Both incidents took place as the community celebrated events throughout the city for the University of Arkansas-Pine Bluff's homecoming.

The fraternity event was not sanctioned by the university, spokesperson Stephanie Jackson said in a text message Tuesday.

"We continue to pray for all those impacted by the tragic events this weekend," Jackson said in a statement. "We deplore the violence that erupted in our city. The community should have the freedom to celebrate without the fear of violence."

The university plans to assist police with any investigations, Jackson said. She said it will address any student-related misconduct if appropriate.

Police have not released what fraternity was involved in the event. The department also has not released any information on possible suspects.

The department is investigating what, if any, security was handling the event at Sahara Shrine Center, Defoor said.

At least one university student was shot by an officer who was one of the first to arrive at Sahara Shrine Center about 1 a.m. Sunday, according to Arkansas State Police, the agency investigating the officer-involved shooting.

The student, Keyyontae Vignaude, was airlifted to Little Rock for treatment and was in critical condition after the shooting, Arkansas State Police said. Hospital staff had not advised detectives of any change in the student's condition since earlier this week, according to Bill Sadler, a spokesman for the Arkansas State Police.

A news release from the Arkansas State Police previously said Vignaude was holding a gun while backing out of the Sahara Shrine Center. Another shooting victim, Daune A. Everett, of Eudora, rushed to aid Vignaude. It is unknown at this time if Everett also was shot by the officer or from some else shooting inside the center, police have said.

A Freedom of Information Request for body camera footage of the incident was denied Thursday by the Arkansas State Police on grounds it remains a part of an open and active criminal investigation.

The officer has yet to be named by Pine Bluff Police Department.

Defoor said Thursday the officer will remain on paid administrative leave until the state and internal investigations are complete, which could take months.

Franklin said during a news conference Monday that a partnership had been formed with the federal Bureau of Alcohol, Tobacco, Firearms and Explosives to investigate the shootings, as well as other future crimes in the city.

Print Headline: Count of injured up by 2 in weekend Pine Bluff gunfire