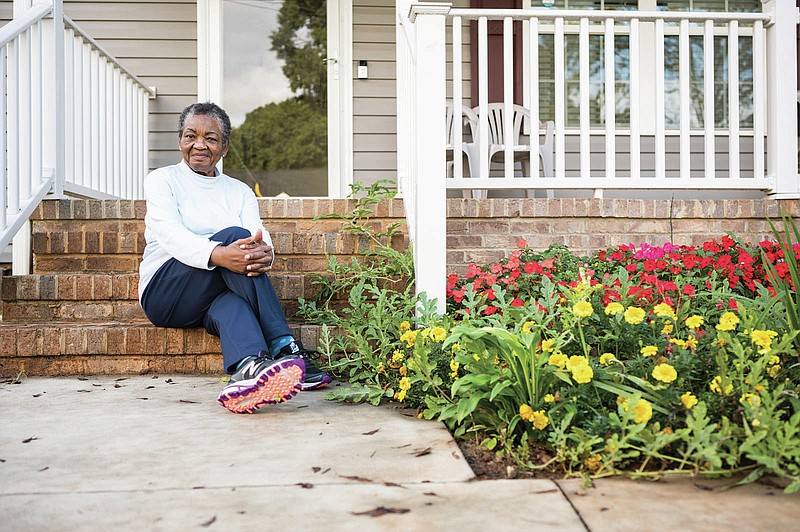 Betty Todd poses for a portrait in front of her home Friday, Oct. 8, 2021, in Greer S.C. (Josh Morgan/The Greenville News via AP)

GREENVILLE, S.C. -- For years, Betty Todd was forced to pay rising rents on homes burdened with repair issues and a landlord who refused to do them.

What gave her hope was an announcement by her pastor, the Rev. Steve Watson, that New Jerusalem Baptist Church in Greer was going to build affordable homes in the community.

Todd stayed in a "no good" house on Sunnyside Drive and waited. She also prayed.

In June 2020, her prayer was answered. She became a tenant in a three-bedroom new home built by New Jerusalem Baptist.

"Not only is it beautiful, it's something that us older people on Social Security can afford," said Todd, who is single and cares for an elderly woman.

"I go to bed happy, and I get up happy, thanking the Lord for my house," Todd said.

Many others may feel inclined to do likewise as more churches -- local and nationwide -- join the effort to fill gaps in the affordable housing crisis.

New Jerusalem church started the journey 20 years ago. They've completed four houses in Greer's Sunnyside community and are scheduled to build 16 to 18 more.

"A lot of people can't afford the regular rent rates in that area in the community," Watson said. "I feel that the Lord has ordained that we go out and try to fill in the gap, meet the need."

North Hills Church in Taylors is partnering with Homes of Hope to build an 18-lot subdivision on six acres it owns, across from its Edwards Road campus.

The burden to help meet the affordable housing need is partly to make a difference in terms of both racial and economic justice. Allan Sherer, chair of North Hills' Elder Board, sees the church's undertaking as an example of "loving your neighbor."

North Hills, historically, has emphasized reaching out to hurting people, he said. The combination of all the things going on with race in America and the housing crisis "just makes us aware that something needs to happen," Sherer said.

A policy brief released in May 2020 by the Terner Center for Housing Innovation at UC Berkeley, focused on expanding the ability of religious institutions to build housing on their land as an option for cities grappling with where and how to build affordable housing.

"Churches, as well as other faith-based organizations, often own underutilized land and/or structures which could be used to expand the supply of affordable housing. Doing so would provide significant untapped benefits for the organization, from supporting the organization's charitable mission to providing revenue that can stabilize the organization's finances," the study said.

The role that Greenville churches can play in making affordable housing happen locally was illuminated in 2019, when the Greenville Housing Fund shared that faith communities in the county own approximately 5,250 acres of land.

JustFaith Greenville, a mission-based faith organization based in Kentucky, implored churches across Greenville to use some of their resources for affordable housing.

The local model JustFaith pointed to was done by Augusta Heights Baptist Church, which in 2010 sold 2.5 acres of its campus to a developer for $570,000 for the creation of 37 affordable housing units, The Greenville News reported. The sale also helped the church weather the heart of the recession.

Another Greenville church, Allen Temple AME, has been providing homes in low-income communities through its Community Economic Development Corporation since 2005. The corporation has nearly 90 homes in Greenville and Pickens counties, its website said.

Affordable housing projects and preservation efforts by Grace Church, St. Anthony of Padua Catholic Church, St. Andrew Episcopal Church and Allen Temple were among those highlighted by the National Association of Realtors.

But other congregations have also been doing the work. Mountain View Baptist Church, on Greenville's Cagle Street, has been buying neighborhood lots for decades with the vision of building affordable houses and providing an opportunity for old neighbors to move back, its pastor, the Rev. Stacey Mills, has said.

Watson said his church has been able to move forward with its residential projects with the support of individuals in the community that have donated property and with help from funding sources such as CountyBank, the Greenville County Redevelopment Authority and State Housing.

"We've got a couple of vehicles that we use to help offset the cost," he said. "Of course, whatever they don't provide, we have to borrow from the bank. That allows us to try to keep the rent down."

Nationally, there is a shortage of more than 7 million affordable homes for the nation's 10.8 million-plus extremely low-income families, said the National Low-Income Housing Coalition.

There is no state or county where a renter working full-time at minimum wage can afford a two-bedroom apartment, the coalition's website said.

San Diego-based Yes In God's Backyard (YIGBY) is working to build 3,000 affordable housing units on "faith property" in that city by 2025. The faith community there has over 4,675 acres of land, much of it already zoned for housing, YIGBY's site said.

The Greenville Housing Fund has a goal of producing 10,000 units of affordable and workforce housing over the next 10 years -- basically 1,000 units a year -- and a goal or preserving 3,000 existing units, said Bryan Brown, the fund's executive director.

While churches do own a lot of property, maps don't reveal whether the property they own is the actual sanctuary property or the acreage adjacent to it that's set for a future community center, life center or some other mission-oriented application that the church wants to make use of with that land, Brown said.

That's a reason why, as of late, encouraging churches to build homes on their property hasn't been a priority in the Housing Fund's strategic plan, Brown said.

"The Greenville Housing Fund operates a land bank and churches have, occasionally, property bequeathed to them when someone passes on," he said. "I do think we'd like to do some outreach to the church communities here that if they do receive a bequest of real property and they don't know what to do with it, the Greenville Housing Fund could work with them on putting that bequest to productive use particularly, in the affordable housing space."

"That's a more compelling idea to me, creating some application of church bequest to help solve our housing affordability challenges in Greenville," he said. "Even if it's vacant property, we can look at that as a way to do infill housing development."

North Hills leaders have been reading the stories about the shortfall in affordable housing and how it plays into issues, like gentrification.

Findings of a study, commissioned by the United Way of Greenville County in partnership with Furman University, showed that residents across the county, especially those who rent, struggle to afford housing, The Greenville News reported in 2019.

This comes down to money, with real median income by household declining 5.3% between 1990 and 2016, and costs, with rent increasing nearly 24% across all census tracts in the county, the story said.

The study also highlighted how, as Greenville grows, poverty and gentrification do as well.

Some of the homes will be for sale and some for rent, with all sales and rental oversight provided by Homes of Hope. The proposal also includes giving $500,000 to be used as a 10-year zero-interest loan to enable Homes of Hope to offer the homes at prices that are affordable to people at the median income level for the people in the area immediately surrounding the church.

"We are forming specific integrated plans to serve, love, and reach the people who move into these homes with the gospel," the proposal said.

North Hills owns six acres across Walker Springs Road that it was able to purchase a few years ago. The land was not being used and there was no specific plan set for how it would be used, Sherer said.

"We thought, 'here's a great opportunity to do a small part of meeting this need," he said.

Construction could start next year, with the first homes finished by the end of the summer.

CommunityWorks is a Greenville-based nonprofit financial organization that works with underserved families and communities, lending to nonprofits.

"So, we want to make sure churches know that we would want to partner with them if they are trying to do their own development, whether it is for their organization with a new building or whether it is for affordable housing," said Virginia Wilson, CommunityWorks' communications manager.

Registration for the event was capped at 50 people and filled in two days.

"We're seeing a lot of interest for this, so we think it's probably a good gauge that it is a trend that's happening and we hope to be able to offer more in the future," she said.