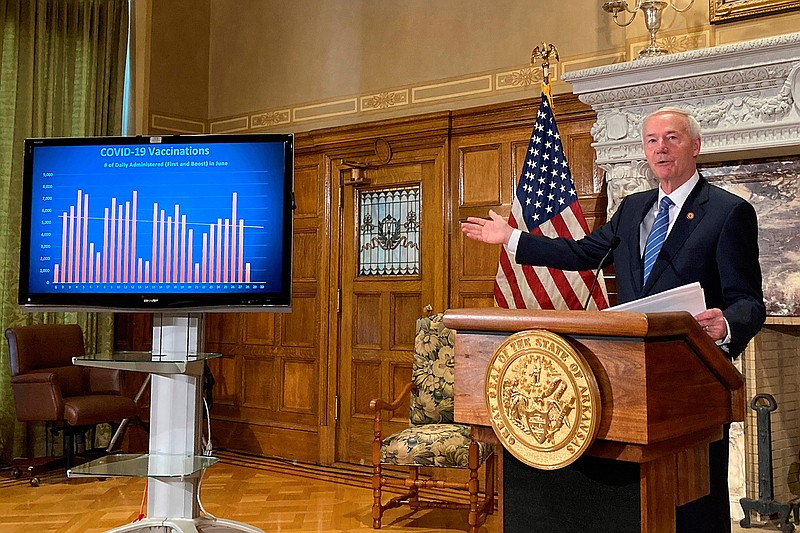 To reduce disruptions to in-person instruction, Gov. Asa Hutchinson said Tuesday that elementary and secondary schools will be able to use a distance of three feet, instead of six feet, to determine who needs to quarantine after a student or employee tests positive for covid-19.

The change came after Hutchinson met with a group of superintendents last week who complained about the number people who were being required to quarantine in response to covid-19 cases.

Under the new protocol, someone who has not been fully vaccinated will be required to quarantine if they are within three feet of an infected person, rather than within six feet, at an elementary or secondary school for at least 15 minutes.

"That’s a significant change that will help our schools minimize the quarantining and balance that with the needs of the public health with the students," Hutchinson said.

The Republican governor made the announcement as the state's count of cases rose by 661, the eighth daily increase in a row that was smaller than the one a week earlier.

The number of people hospitalized in the state with covid-19, however, rose by one, to 461.

It was the first time the number had risen since Sept. 20.

The state's death toll from the virus, as tracked by the Department of Health, rose by 19, to 8,221.

Health Secretary Jose Romero said the new quarantine guidelines will only apply to elementary and secondary schools, with a distance of six feet still being used to determine quarantines for colleges and universities and child care centers.

He said the Health Department will change the rule for elementary and secondary schools back to six feet if the shorter distance results in an increase in cases.

Hutchinson said the state's declining new cases numbers played a role in the decision to relax the policy.

"Clearly if you were at the height of the pandemic, I don’t think this is something you would do, but as leader you have to balance the risk and the losses," Hutchinson said.

"Right now, we're having severe hardships in our schools to the students and learning loss and a lack of participation and dropping out, and that is a huge human loss as well, and a risk."

At his weekly news conference at the state Capitol, Hutchinson also said a new protocol allowing schools to offer regular, rapid testing as an alternative to quarantines will allow students who submit to the tests to continue to participate in extra curricular activities, as well as attend classes, after being near someone with covid-19.

A special session of the Arkansas Legislature planned for next week will be delayed, Gov. Asa Hutchinson said Tuesday.

Hutchinson made the announcement during his weekly news conference at the state Capitol in Little Rock.

The governor earlier planned to call lawmakers back into session Oct. 25 to consider income tax cuts.

Hutchinson said he will work with legislative leaders to finalize an outline presented during the conference to generate the support needed for the measures to pass in the session. The governor also referenced “other issues that have been brought up.”

State Sen. Jason Rapert, R-Conway, tweeted Oct. 11 that he would file a bill modeled after Texas' law and invited Hutchinson to put it on the call.

The Texas legislation is the most restrictive abortion law in the United States. It bans abortions once cardiac activity is detected, usually around six weeks, and is now being disputed in the courts.

The law leaves enforcement solely up to private citizens, who are entitled to collect $10,000 in damages if they bring successful lawsuits against not just abortion providers who violate the restrictions, but also anyone who helps a woman obtain an abortion.

Hutchinson will discuss the coronavirus pandemic in Arkansas, as well as other "topics of the day," according to a news release by the governor's office.

[Video not showing up above? Click here to view » https://www.youtube.com/watch?v=XWOhlIqkde4]