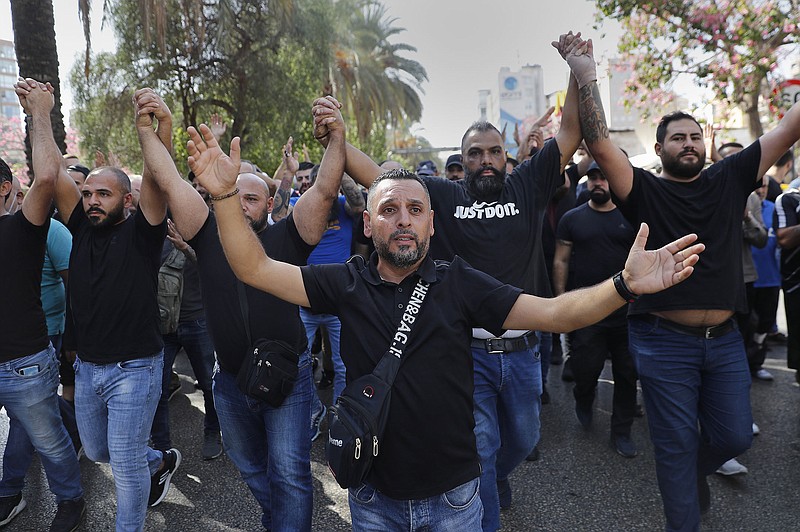 Supporters of the Hezbollah and Amal groups march Thursday outside the Justice Palace, in Beirut in protest against Judge Tarek Bitar, who Hezbollah and its allies accuse of singling out politicians for questioning, most of them allied with Hezbolla, in investigating last year’s deadly seaport blast. (AP/Hussein Malla)

BEIRUT -- Heavy gunfire broke out Thursday in Beirut during a protest organized by the Hezbollah group against the judge leading the investigation into last year's blast in the city's port. At least six people were killed and dozens wounded in the most violent street fighting in the Lebanese capital in years.

The exchanges of gunfire along a former front line from the 1975-90 civil war involved pistols, automatic rifles and rocket-propelled grenades, and were reminiscent of that conflict. Gunfire echoed for hours, and ambulances rushed to pick up casualties. Snipers shot from buildings. Bullets penetrated apartment windows in the area. Schools were evacuated, and residents hid in shelters.

The chaos raised the specter of a return to sectarian violence in a country already embroiled in multiple crises, including one of the world's worst economic crises of the past 150 years.

It was not clear who started the shooting, which began shortly after the start of the protest organized by the Iran-backed Hezbollah and its Shiite allies from the Amal Movement against Judge Tarek Bitar, who is leading the investigation into last year's port explosion. Hezbollah and its allies accuse the judge of singling out politicians for questioning, most of them allied with Hezbollah.

Tensions over the port blast have contributed to Lebanon's many troubles, including a currency collapse, hyperinflation, soaring poverty and an energy crisis leading to extended electricity blackouts.

Officials from both Shiite parties, including Hezbollah leader Hassan Nasrallah, had attacked Bitar for days, accusing him of politicizing the investigation by charging and summoning some officials and not others. They want him removed.

[Video not showing up above? Click here to watch » arkansasonline.com/1015lebanon/]

None of Hezbollah's officials have so far been charged in the 14-month investigation.

The probe centers on hundreds of tons of ammonium nitrate that were improperly stored at a port warehouse that detonated Aug. 4, 2020. The blast killed at least 215 people, injured thousands and destroyed parts of nearby neighborhoods. It was one of the largest non-nuclear explosions in history and further devastated the country already beset with political divisions and financial woes.

Bitar is the second judge to lead the complicated investigation. His predecessor was removed after legal challenges.

On Thursday, shortly before the planned protest, an appeals court turned down a request to remove Bitar from his post. The request was filed by two lawmakers who are defendants in the case, both of them allies of Hezbollah.

The calls for the judge's removal upset many who considered it blatant interference in the work of the judiciary.

In a statement Thursday, the two Shiite groups said their protesters came under fire from snipers deployed on rooftops. Among the dead -- all Shiites -- were two Hezbollah members.

The army also said protesters came under fire, but later in the evening said an "altercation and exchange of fire" occurred as the protesters were headed to the Justice Palace.

The violence unfolded while U.S. Undersecretary of State for Political Affairs Victoria Nuland was in town, meeting with Lebanese officials. Her schedule was slightly thrown off by the action in the streets.

Nuland later said at an airport news conference that an impartial judiciary is the guarantor of all rights, in apparent criticism of Hezbollah. "The Lebanese people deserve no less, and the victims and the families of those lost in the port blast deserve no less," she said. "Today's unacceptable violence makes clear what the stakes are."

The Lebanese Red Cross said at least 30 people were wounded. One of the dead, a mother of five, was shot in the head. Hezbollah said it planned a funeral for the woman, and two of its fighters, for today. Amal, which is headed by Parliament Speaker Nabih Berri, planned a separate funeral for two of its members.

The shooting subsided around four hours later, after army troops were deployed.

In a statement, Prime Minister Najib Mikati appealed for calm and urged people "not to be dragged into civil strife."

Information for this article was contributed by Hassan Ammar and Fadi Tawil of The Associated Press. 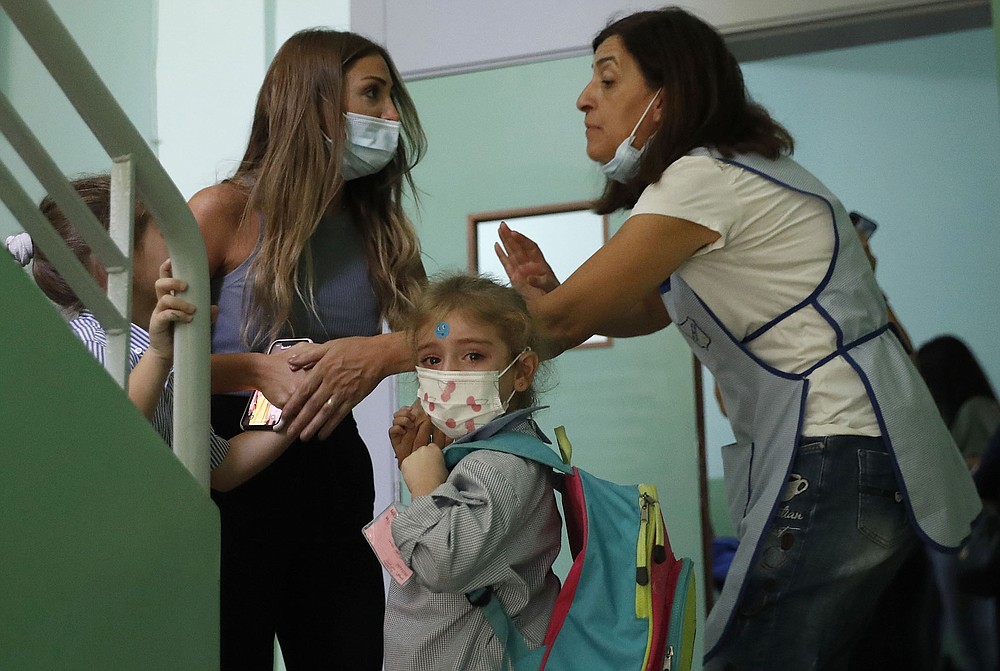 A Beirut teacher (right), asks a mother who came to school for her children not to go out Thursday after deadly clashes broke out along a former 1975-90 civil war front-line between Muslim Shiite and Christian areas at Ain el-Remaneh neighborhood. (AP/Hussein Malla) 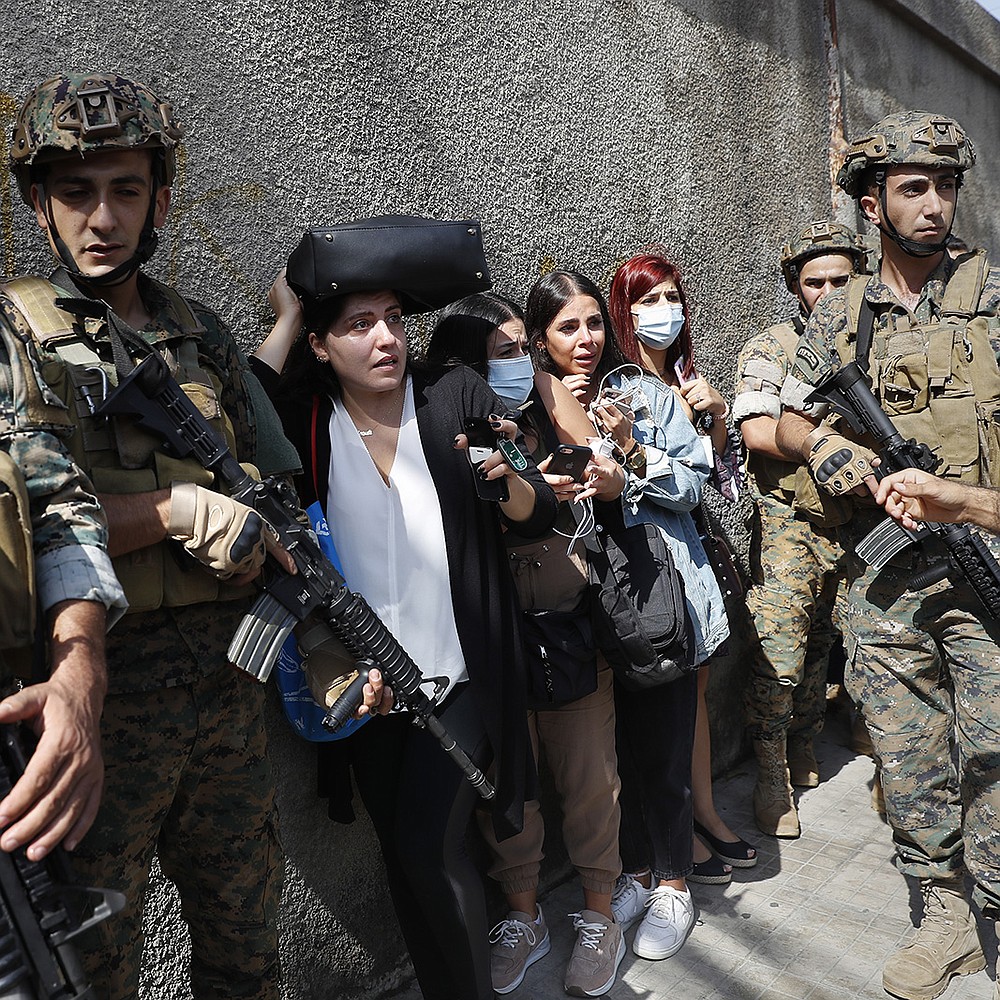 Teachers flee their school Thursday in Beirut under the protection of Lebanese soldiers amid gunfire that broke out during a Hezbollah-organized march against the judge investigating last year’s huge explosion in the city’s port. At least six people were killed. The chaos raised fears of a return to sectarian violence in a country already embroiled in multiple crises, including a fraying economy. (AP/Hussein Malla)