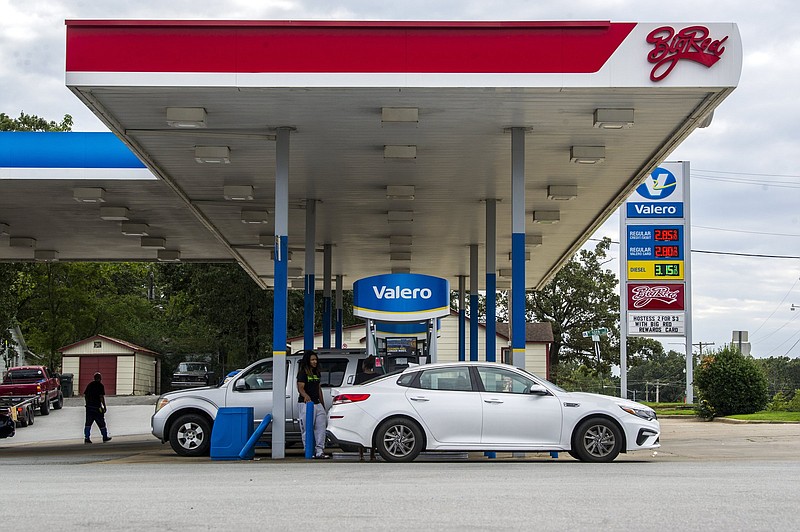 People get gas at a gas station on Fair Park on Tuesday, Oct. 12, 2021. (Arkansas Democrat-Gazette/Stephen Swofford)

Gasoline prices in Arkansas have topped $3 in some places and are expected to continue to rise as oil prices climb as a result of OPEC's recent decision not to increase production.

The average price of a gallon of gas in Arkansas rose 7 cents in the past week to $2.93, as of Tuesday, according to the American Automobile Association. The price was $2.84 last month and $1.88 a year ago.

The national average price per gallon rose 8 cents in the week before Tuesday to reach $3.27, data show. Prices per gallon have surged past $4 in California and Hawaii. The average national price has not been this high since October 2014 when George W. Bush was in office.

The recent rise in crude oil prices is driving the price increases. Oil accounts for more than half of the cost at the pump, experts said.

Crude prices surpassed $80 a barrel after last week's decision by the Organization of Petroleum Exporting Countries, Russia and their allies, which agreed to increase production only by a modest 400,000 barrels a day in monthly installments. This came despite growing calls from politicians to increase output and ease the rising prices of transportation fuels. West Texas Intermediate, the American Standard for crude, traded as low as $67 a barrel last month.

Despite political pressures, the OPEC cartel chose not to move forward with an agreement to produce 800,000 barrels a day in November.

Rising gasoline prices can be a drag on the economy. According to economists, retailers tend to increase the price of goods, employers hold off on hiring and shoppers spend less, among other scenarios, when fuel prices spike.

The Biden administration has raised supply issues in recent meetings after oil spills and production disruptions caused by Hurricane Ida, and can authorize the release millions of barrels of petroleum reserves to offset fuel costs. It has also urged the Federal Trade Commission to monitor the gasoline market and take action as needed.

"We're going to continue to use every tool at our disposal, even as we're not a member of OPEC, to ensure we can keep gas prices down for the American public," Biden press secretary Jen Psaki said in a briefing last week.

Gasoline prices plummeted a year ago when covid-19 travel restrictions limited the number of cars and trucks on the road and how far people traveled. They began to rise earlier this year after severe winter weather shut down refineries along the Gulf Coast and production cuts realigned supply with demand. The average price of regular gas in Arkansas was $2.50 a gallon in March.

OPEC last month estimated that global fuel consumption would recover from its pandemic slump next year and forecast growing demand for oil through 2035 despite efforts from world leaders to avert climate change.

The price of gasoline in Arkansas is below $2.90 in the central and Northwestern regions, according to AAA. It has surpassed $3 in the state's southeastern corner and other rural areas.