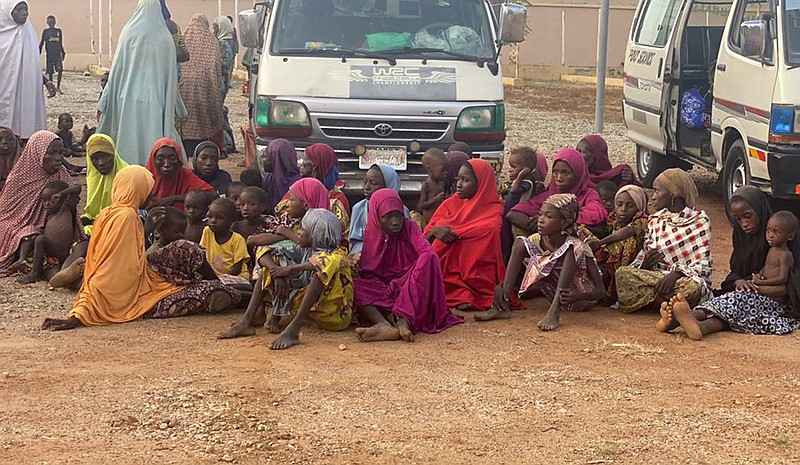 These Nigerians were among at least 187 children and adults freed from kidnappers Thursday in Zamfara state. (AP/Nigeria Police Force)

LAGOS, Nigeria — In one of the largest liberations of kidnap victims in Nigeria, at least 187 people including babies have been freed in the country’s troubled north, police announced.

Nigerian security forces rescued the hostages from a forest in Zamfara state where they had been held for many weeks, Zamfara police spokesperson Mohammed Shehu said in a statement. He said they were released “unconditionally,” indicating that no ransoms were paid.

The hostages in Zamfara were freed Thursday as a result of “extensive search and rescue operations,” and were helped by sweeping security measures including a shutdown of mobile phone networks and restrictions on gatherings and movements in Zamfara state, Shehu said.

“The new security measures in the state have been yielding tremendous results, as they have led to the successful rescue of many abducted victims that run into hundreds, and [they] have been reunited with their respective families,” Shehu said. Nigeria’s security agencies will continue working “to ensure the return of lasting peace and security in the state,” he said in the statement.

The people had been kidnapped by armed bandits who operate in remote forest reserves in Nigeria’s northwest. Gangs of the outlaws on motorcycles attack rural villages where they murder, rape, steal and take hostages. The large bands often outnumber police and security in the settlements they attack. There are thousands of such bandits, according to security experts.

The trucks stopped at a military checkpoint Thursday night on a highway between Ciudad Victoria and Monterrey in the northern state of Tamaulipas. The state public safety agency said Friday that four suspects were arrested.

Among the migrants were 564 Guatemalans, as well as migrants from Honduras, El Salvador, Nicaragua and Belize. More than half of those aboard the trucks were children, nearly 200 of them not accompanied by an adult.

Authorities said the trucks’ journey appeared to have started in the central state of Puebla and they were trying to reach Monterrey, a key transportation hub for reaching various points on the U.S.-Mexico border.

The trailers were padlocked, forcing authorities to move them to state police facilities to cut them open. The Red Cross said that 40 migrants were evaluated for dehydration and malnutrition.

LISBON, Portugal — Portugal’s parliament approved four bills Friday that enshrine in law the country’s rules and procedures on blood donations, amid reports people are being turned away due to their sexual orientation.

The Portuguese Constitution forbids discrimination based on a person’s sexual orientation, and discrimination in blood donations has been specifically prohibited in Portugal since 2010.

But some health workers have been accused of refusing to accept homosexual and bisexual donors, claiming their sexual behavior places them at a heightened risk for transmissible diseases.

The governing center-left Socialist Party said it had received reports of discrimination, specifically from gay men who went to donate blood at health departments but were told they couldn’t — even though the rules say they can.

Its bill, which will now come into force, says health services “cannot discriminate between donors based on their gender identity or sexual orientation.” Three other bills stated the same, but with additional details such as donor campaigns and rewards for donors.

BERLIN — A 100-year-old man on trial for his alleged role as a Nazi SS guard at a concentration camp during World War II told a German court Friday that he was innocent.

The defendant is charged with 3,518 counts of accessory to murder at the Sachsenhausen concentration camp near Berlin, where he allegedly worked between 1942 and 1945 as an enlisted member of the Nazi Party’s paramilitary wing.

German news agency dpa reported that the defendant, who was identified only as Josef S. in keeping with German privacy rules, said on the second day of his trial before the Neuruppin state court that he didn’t know the Sachsenhausen camp.

Two witnesses from France and the Netherlands earlier told the court how their fathers were killed at Sachsenhausen for having been part of the resistance against the Nazis.

Authorities deemed the defendant fit enough to stand trial despite his advanced age, though the number of hours per day the court is in session will be limited.

More than 200,000 people were held at Sachsenhausen between 1936 and 1945. Tens of thousands of inmates died of starvation, disease, exhaustion from forced labor and other causes, as well as through medical experiments and systematic SS extermination operations including shootings, hangings and gassing. 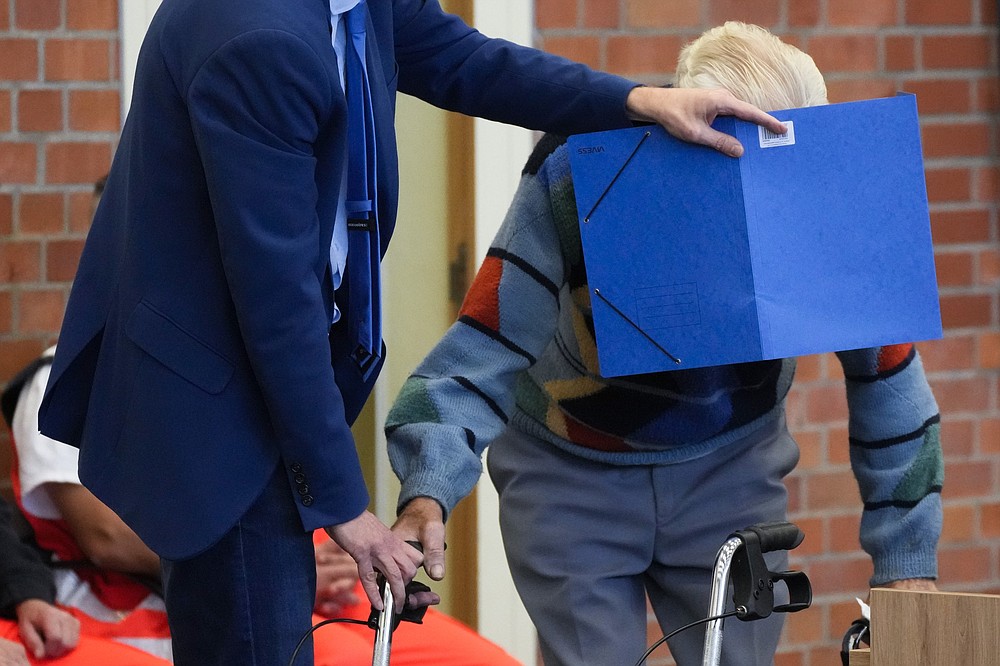 As they arrive at court in Brandenburg, Germany, on Thursday, an attorney covers the face of Josef S., 100, who’s on trial over his alleged role as a Nazi SS guard. (AP/Markus Schreiber)
ADVERTISEMENT