Following the Bible: Harding students step back in time in Greece 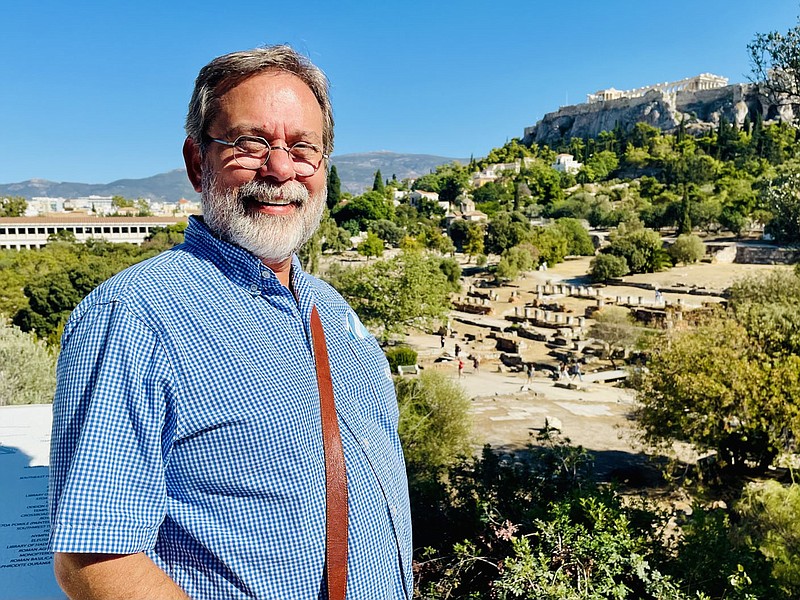 Harding University in Greece Director Daniel Adams, pictured Sunday, Sept. 26, 2021 in Athens, Greece, stands above the city's ancient marketplace, where the Apostle Paul evangelized. The Parthenon, which sits atop the Acropolis, is visible in the upper right hand corner. (Arkansas Democrat-Gazette/Frank E. Lockwood)

Atop the Acropolis, early on a Sunday, visitors beheld the Parthenon and the marvels of antiquity, but their ears heard bells, arising from the churches beneath them, throughout the morning.

The ruins above the city may be pagan, but the metropolis below is solidly Christian, Orthodox and Greek.

In a distant suburb, however, tired Harding University students, just back from retracing a portion of the Apostle Paul's Second Missionary Journey, were free to sleep in, if they chose. Rather than rising at sunrise, they pray most Sundays at more conventional American Protestant hours.

The Searcy school, which is affiliated with the Churches of Christ, has had a campus near Athens since 1994, according to Harding University in Greece Director Daniel Adams. It had operated, year after year, until covid-19 erupted in spring 2020.

"The day they declared it a pandemic, we sent everybody home. So we didn't have anybody for the rest of the spring, that summer, fall or this spring. This summer we restarted," Adams says.

During the week, roughly 15 participants are studying modern Greek and a variety of other subjects in Porto Rafti, east of the capital city and near the Aegean Sea.

On average 25 students attend each semester, but with covid-19 still circulating, "some people are still reticent to travel," Adams says. Those who make the journey are able to glimpse the birthplace of western civilization.

For Harding students, in Greece and elsewhere, spiritual development is a priority.

"With all of our programs, it doesn't matter where they are, we always have a Bible class, whether it's back in Searcy or on the overseas programs, and daily chapel when we have class," Adams says as he strolls down a cobblestone pathway near the Parthenon.

"With the Greece program, it's particularly relevant," he says.

Travel is a key element.

"We're very close to Israel and Egypt. We go to those places," Adams says. In Galilee and in Jerusalem, "we get to follow the footsteps of Jesus."

With King Herod killing infants, Mary and Joseph fled with their son to the land of the Pharaohs, the New Testament reports. According to church tradition, they lived for four years in Heliopolis -- Greek for "City of the Sun."

Later in the field trip, Adams says, "we do a Nile River cruise, look at all the ancient temples, [and] spend a good deal of time in Luxor, which is where Moses grew up."

Jesus never visited Athens, at least in the biblical accounts. But Greece and its language are prominently featured in the Acts of the Apostles and in the Epistles which follow.

Some of the earliest New Testament congregations sprang up near the Aegean coastline nearly 2,000 years ago, spreading along the major trade routes linking Jerusalem, Athens and Rome.

At the time, Greek was the language of commerce and culture, a legacy of Alexander the Great and others. It was also the language of the Gospels and the early church fathers.

The New Testament reports that Paul spent time in Athens, observing its religious practices and assessing its various deities.

While there, Paul's "spirit was stirred in him, when he saw the city wholly given to idolatry," Acts 17 states in the King James Version.

So the Apostle "disputed" with philosophers and Jews and other "devout persons" as well as those he met "in the market daily."

While in Greece, Harding students visit the Agora, site of the city's old marketplace. And they climb the Aeropagus, sometimes referred to as Mars Hill, where Paul, according to the New Testament account, denounced the pagan shrines around him.

Two millennia later, visitors to the Aeropagus (or "Rock of Ares") can read Paul's entire sermon in the original, somewhat archaic, Greek; it's inscribed on a plaque not far from the summit.

During the semester-long program, students visit the city's key sites and learn about Hellenic culture. They also attend at least one Orthodox service.

"Usually, we go to a little church in [a suburb called] Markopoulo," he says. "We'll walk inside and go up in the balcony and watch. That way we can see everything that's going on ... [without] being a disruption."

The service, in its entirety, can last three hours, though worshippers sometimes come and go midservice, he says. Churches of Christ gatherings are typically somewhat shorter.

But this much they share. Each Sunday, they commemorate the crucifixion and resurrection of Jesus Christ.

When congregants gather to pray on this particular Sunday -- socially distanced and properly masked -- they sit in chairs instead of pews and sing songs that Searcy churchgoers would likely recognize. Roughly two dozen are there, about as many as covid-19 restrictions would allow.

Tim Tripp, senior minister at West Side Church of Christ in Russellville, delivers the message on Sunday evening, reading from one of Paul's letters to the church in Corinth, a town "just down the road" from Glyfada, he notes. The city, along with Mars Hill, were on his Greek itinerary.

Afterward, a Harding student speaks enthusiastically about his recent pilgrimage to Philippi, Thessaloniki and other places with New Testament churches; the Apostle Paul visited both cities during his missionary journeys.

"We've grown up reading about him or hearing about him, and it's just amazing [to be there]," says Dylan Holland, 19, a Bible and Family Ministry major from Fayetteville.

Thanks to Harding University in Greece, the dots on a New Testament study Bible map are no longer abstractions, he notes.

What he's learning, he believes, will help prepare him for future ministry.

"That was a driving factor for wanting to do this trip, getting to go to all these places that I'll someday be able to teach and preach about," he says.