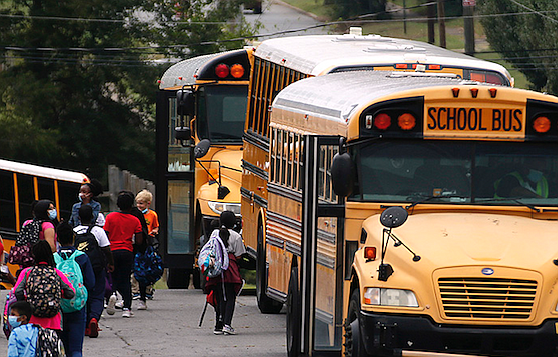 Students make their way to their buses as school lets out on Friday, Oct. 1, 2021, at Booker Arts Magnet Elementary School in Little Rock. A shortage of school bus drivers across the country is also affecting the Little Rock School District and others across the state. (Arkansas Democrat-Gazette/Thomas Metthe)

Each morning, Pharis Smith leaves his home as the sun begins to rise over the fields of soybeans and corn to start his shift as a bus driver for the Jackson County School District.

Smith has been driving a school bus for about a decade. The afternoon rides are his favorite.

Smith needs to decompress because driving a school bus isn't his only job at the district. He's also the principal of Tuckerman Elementary School.

He's not the only administrator in the district to drive a bus route.

Almost all of them do, including the superintendent and the middle and high school principals. Smith's wife, Lori Smith, an elementary school teacher, also drives a bus. Several other teachers do as well, as does a librarian.

The reason: It's nearly impossible for the rural school district to find anyone who wants to drive buses.

According to Pharis Smith, finding drivers has been an issue in Jackson County for years. But now the shortage is spreading to other districts across Arkansas, in both rural and urban areas, and it appears to have been exacerbated by the ongoing pandemic.

Shortages are reaching crisis levels as administrators say they simply can't find enough drivers for their bus routes. As in Jackson County, other districts are asking coaches, administrators and other staff members to obtain the special licenses needed for bus driving.

"I know superintendents who are driving bus routes regularly because they can't find anyone," said Dale Query, executive director of the Arkansas Rural Education Association.

Districts are also consolidating routes, meaning one driver may pick up or take home twice the number of students as before. That means many students may have to wake up earlier to be picked up and may get home later in the afternoons, encroaching on time to do homework or spend with family.

"We are probably approaching a crisis as far as finding bus drivers," Query said. "When you go by many communities, there are buses sitting outside of schools with signs saying: 'We need drivers. Please apply.'"

"It's not just small schools or rural schools," he said. "It's all schools that are really struggling to find bus drivers."

It's also a national problem.

A survey released at the end of August by the National School Transportation Association, in partnership with two other trade associations, found that just over 50% of 1,500 respondents described driver shortages as "severe" or "desperate."

Nearly 80% of those surveyed said the shortages are getting "much worse" or a "little worse," according to the association. The survey found that low pay, odd working hours, inadequate benefits and the time it takes to secure the license needed to operate a school bus were some of the reasons for staffing issues.

Trent Jones, director of communications for the Springdale School District -- which, with more than 20,000 students, is the largest school district in Arkansas -- described the dearth of drivers as having a "serious" impact.

When fully staffed, the Springdale district has 115 drivers. The current driver count is about 65.

"Bus driver shortages are an annual issue and a nationwide issue," Jones said. "This year, though, in particular, has been challenging. We are short on bus drivers in a larger volume than we ever have been before."

"We are being as creative as we possibly can with running multiple routes, and our buses are running earlier and later," he said, adding that the district is appealing to surrounding communities as it tries to find new recruits.

Jones and other administrators voiced concerns that the lack of drivers could have consequences as it means some students may not have a mode of transportation to get to school. That has not necessarily happened yet, but it's a scenario that Jones and others say they worry about.

"The impact on our students is critical," Jones said. "If a student cannot come to school, not only are they suffering through loss of educational opportunity but also the social and emotional impact of school.

"A bus driver shortage puts all of this potentially at risk because of the pressures it's putting on our families to adjust their schedules to ensure their students get to school."

Tamuela Smith, a senior location manager for First Student, a company contracted by the Little Rock School District to provide bus services for the district, said she normally is not vocal about the school bus driving industry.

"I usually don't speak this publicly," she said.

In an email to the Arkansas Democrat-Gazette, Tamuela Smith detailed statistics of the attrition rates the company has experienced over the past couple of years.

"The school bus industry is unique," she said. "It has some of the most talented people you will ever meet. It's just one of those things you have to try in order to believe how fantastic and rewarding it can be."

It seems hard to convince people, especially younger generations, of the rewards of driving school buses, said Bobby Hart, Searcy School District superintendent. Hart, who has filled in as a driver, describes it as "watching kids grow up from kindergarten through graduation."

"Those kinds of individuals are just harder and harder to find," Hart said. "The sheer responsibility of the safety aspect alone causes some people to balk."

Those in charge of recruiting new drivers for districts in the Little Rock area said young people are opting for jobs with Amazon, which recently has opened distribution centers around the city.

"I like to tell people we are competing with Amazon," said Charles Anderson, an operations specialist in the transportation department of the Pulaski County Special School District.

"Amazon has put a big dent in our hiring," Anderson said. "We also have a lot of older people, maybe some people who did not want to return because schools and buses are full again, and they don't want to chance [catching covid-19]."

Anderson said he hoped to recruit 30 drivers over the summer. He hired eight.

"I am worried," he said. "I constantly talk to people about the fact that we don't have any new, fresh drivers coming in. Most of the drivers have aged, and once they start retiring in the next five years, then what is it going to look like?"