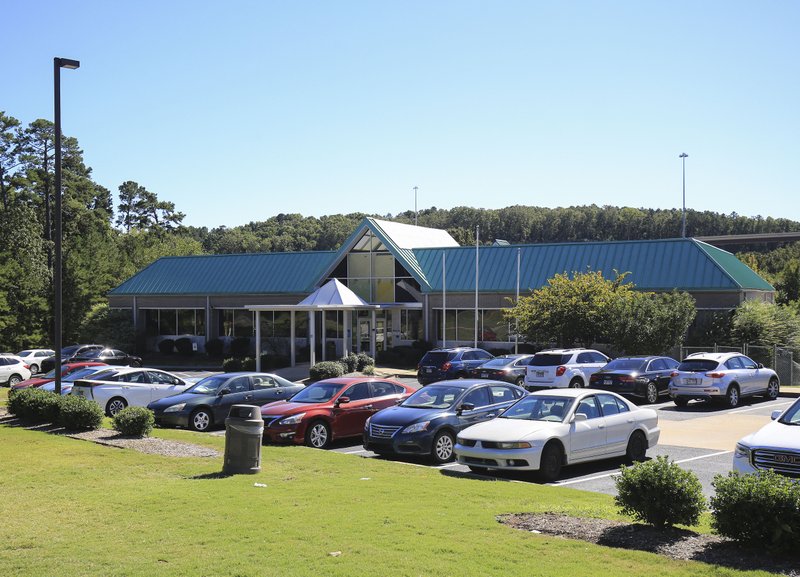 One of Arkansas' newest schools has a far greater resemblance to a floor in a company office building -- complete with 29 cubicle workspaces and glassed-in conference rooms -- than to a traditional campus with desk-filled classrooms.

"This is a different school environment. I don't know if you have ever seen a school like this before," Arkansas Hybrid School Principal Aydogan Altun said last week as he led a tour of the large, windowed room of red- and gray-walled cubicles.

The new school serves kindergarten through 12th graders who do their school work from their homes under the direction of their teachers. Each teacher has a cubicle where he or she sits at the controls of at least three computer screens -- with telephones, headphones, cameras and electronic writing pads at the ready.

The teachers meet with students, provide online instruction, make assignments and grade the results -- all online.

They teach from lessons created by an outside vendor, the Florida Virtual Academy.

And once a week, or at least every other week, students attend a half-day of academic and science "maker-space" activities at the Little Rock headquarters or at the LISA Academy campus on Holcomb Street in Springdale. Computers, 3D printers, a laser cutter, drones and ozobots for the teaching of coding skills are just some of the equipment in the space that will be opened for community use in central Arkansas later this year.

The required on-campus time for students -- which is actually optional in this pandemic school year -- is what distinguishes the Arkansas Hybrid School from more traditional schools or even the state's other online schools, LISA Academy Superintendent Fatih Bogrek said last week.

The Hybrid School enrollment last week was 115 students. An additional 320 students -- who are enrolled in other LISA Academy schools but have chosen not to attend school in person this year because of concerns about the covid-19 disease -- are also being taught online by the Hybrid School staff of 19.

LISA Academy Assistant Superintendent Luanne Baroni said the Arkansas Hybrid School model, with its plans for satellite locations soon in Jonesboro and Fort Smith, can provide families in different parts of the state with a LISA Academy education without a brick-and-mortar school. The satellite locations for hands-on projects, clubs and testing are expected to be rented space at locations such as a community centers, churches or libraries.

"The model opens up a lot of opportunities in communities across the state," Baroni said.

The Arkansas Board of Education earlier this year approved the Hybrid School plan to grow over time to serve as many as 1,050 students. After that vote, the charter-school planners undertook the $1.5 million renovation and furnishing of the two-story Corporate Hill building that served as LISA Academy's first campus in 2004.

Still to be completed at the site in advance of a Dec. 1 grand opening ceremony are offices and dining space, Bogrek said.

Tennille Winston, a first- and second-grade Hybrid School teacher, last week described how her pupils and their parents log in to the grade-level, subject area "landing pages," where they can see the schedule and plans for the day and week, be it for math or English/language arts or the other subjects.

Additionally, parents and students can from the landing pages book an individual meeting with the teacher. Teachers have daytime and evening office hours. The landing pages also include links to Winston's expectations for the student's online behavior -- such as being on time and wearing clothing appropriate for school.

Winston and about a half-dozen young children later convened in one of the four conference rooms. The teacher traced large number "3s" on an electronic white board at the front of the room. Her pupils -- all wearing the light blue polo tops of the school uniform -- did the same at their tables.

Heather Gray teaches fifth grade to 35 pupils, some of whom are enrolled in the Hybrid School but others are enrolled in other LISA schools but have opted for virtual instruction this year because of covid-19.

Gray sees all her students every day via the Zoom meeting platform if not in person. Students and parents can see the lessons and assignments on the landing pages and don't have to text or email the teacher for direction on what to do that day, she said.

The Hybrid School lessons are asynchronous, meaning that they are recorded for viewing at a student's or family's convenience. However, Gray said, she suggests a schedule such as one in which students use Monday for English/language arts, Tuesday for math, Wednesday is for social studies, and Thursday for science.

Everything from the week is due to the teachers on Sunday evening, which is the school's method of monitoring student attendance. State- and school-system required testing of students is also done on campus or eventually at the satellite centers..

"I'm in heaven," said Gray, who previously taught at a LISA Academy campus in Sherwood and is the mother of a third-grade Hybrid School pupil.

"I love it. I love technology and art," she said about the Hybrid School. "The beauty of this place you get to be creative. Instead of being a dictator in my classroom, I try to make it a group effort, and they let me do that here."

'BEST OF BOTH WORLDS'

Lauren Dotson, who has 138 students in her six high school English, Advanced Placement Language and journalism courses, said she was attracted to the Hybrid School concept because her first two years as a beginning teacher were spent in a pandemic teaching online.

"I realized I liked teaching virtually," said Dotson, who does two hours a week of live teaching for each of her courses. Like her colleagues, she uses lessons from the Florida Virtual Academy as a basis for that work.

Mery Ritter, a parent to fourth grader Amelie Ritter, 9, calls the new Arkansas Hybrid School "the best both of worlds" for her daughter because of its blend of online instruction and the ability to occasionally be with her peers.

"I like that Amelie has learned organizational skills and she doesn't need me as much, but I am home and I can guide her. I can see what she is learning. I see her lessons, and that is very helpful," Ritter said.

Ritter also likes that her family can avoid the stress of an early morning rush to get ready for school.

"Amelie is able to take breaks at home. She is able to do her cello. She plays the cello. She likes to do embroidery. I'm very proud of her. She has grown a lot in the last year. This is an amazing fit for her."

Amelie meets with her teacher, former 18-year international teacher Ann Moore, on campus on Mondays and she returns on Thursday for science activities. She said she spends about two hours a morning on her schoolwork.

"The curriculum is absolutely challenging," Amelie said about her new school. "But it's not stressful. It's hard but you can do it."

Amelie also said she has the flexibility to follow the teacher's suggested schedule for doing the schoolwork.

"If we don't want to follow the schedule, it's fine, but you have to catch up on the work," she said.

Ritter doesn't work outside the home but families with working parents are also accommodated at the Hybrid School, Assistant Principal Krystle Hula said.

"We have some kids who are at home during the day with the grandparents but they work with their parents on the evenings or the weekends," Hula said. "We also have a lot families that were home-school families but they really wanted their children to have the experience with other students as well as with the enrichment clubs that we offer. With this program, the parent can still be a learning coach to their child but the child gets experience with actual teachers in live sessions and on campus, and with other students."

The Hybrid School is one where so far one of the biggest disciplinary problems are students who blurt or interrupt the online lessons, fourth grade teacher Moore said. The teacher response is to warn the student to stop and if that is not successful, the student's online voice is muted by the teacher, who will later confer with the student and the parent about the problem.

Cynthia Dawson, president of the board of trustees for the LISA Academy, said the board was comfortable with forming the Hybrid School because of requests from parents statewide for LISA Academies with a focus on science, technology and college preparation, and because "our staff is so good at innovation."

"We want all students to show growth," Altun, the principal, said about the Hybrid School's mission.