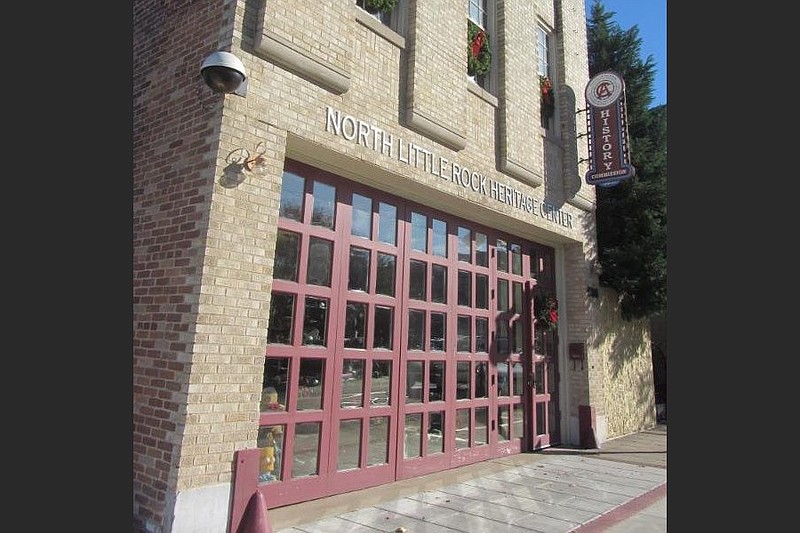 A civic-minded sense of humor animates the tombstone on display at North Little Rock Heritage Center's museum, housed in a former fire station built in 1895.

Opened in 2014, the museum gets less notice than it merits, given the variety and fascination of its exhibits. It is operated by the North Little Rock History Commission on the lower of two floors in a brick building along Main Street that served as the city's main fire station until 1962.

The facetious tombstone is tucked in a side room.

The make-believe burial took place on July 30, 1965. It was part of a campaign for civic pride sponsored by the local Chamber of Commerce. Performed by Mayor William F. Laman, the ceremony involved an actual coffin as well as a freshly dug grave and the tombstone. 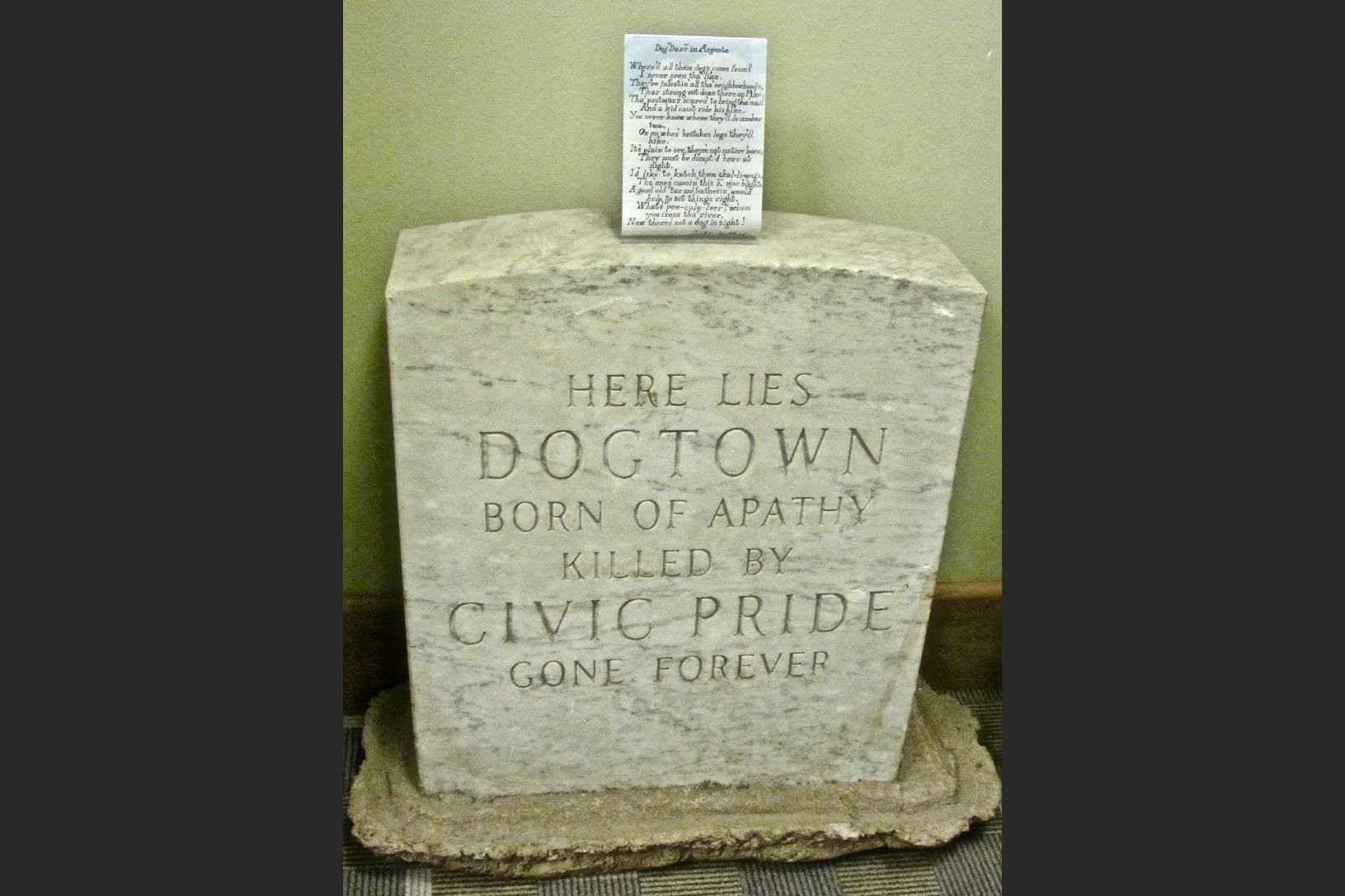 A mock tombstone, created in 1965, aimed to put to rest “Dogtown.” (Special to the Democrat-Gazette/Marcia Schnedler)
The mock marker resonates with the huge "Dogtown Proud" mural, painted in 2020 at Fourth and Main streets, showing a pack of pooches loping toward viewers. The tombstone, like other museum exhibits, makes it evident that North Little Rock is more than just an appendage of its more populous neighbor south of the Arkansas River.

A large artificial evergreen stands just inside the museum. Now decorated for the Christmas season, it is girded by tracks for a toy train spiraling up the branches. Railroading has long been an important part of North Little Rock's economy. A model of a steam locomotive and tender is displayed next to one of two poles used by firemen back when the building operated as a fire station.

Museum visitors learn that the name "North Little Rock" was permanently affixed only in 1917. The earlier name was Argenta, a municipality annexed by Little Rock in 1890. After contentious legal maneuvering, the territory north of the river broke free to become a separate city in 1904. The original name is preserved in the downtown Argenta Historic District. 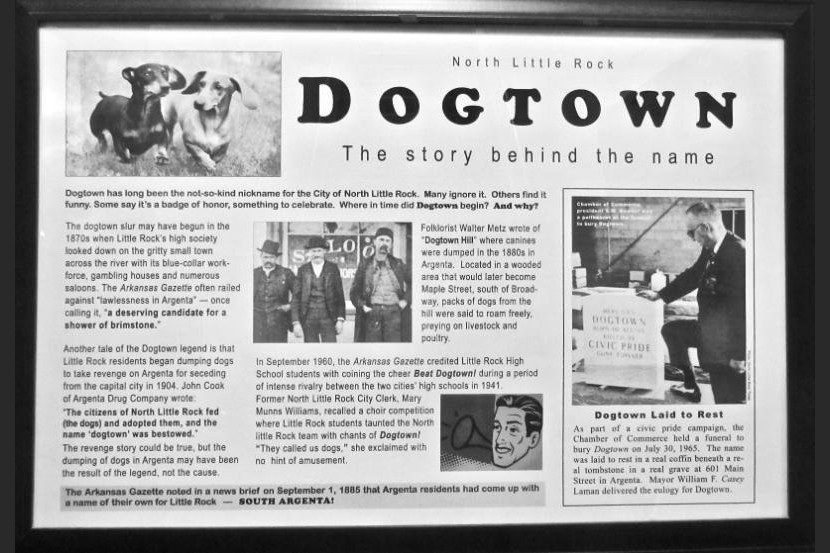 A sign at the Heritage Center explains the origin of “Dogtown.” (Special to the Democrat-Gazette/Marcia Schnedler)
Photographs show that the 1923 dedication of the old Broadway Bridge was a much grander civic occasion than the 2016 opening of today's Veterans Memorial Bridge. For the 1923 festivities, two queens were crowned, one from each side of the river. They reigned, along with 28 princesses, over a parade that stretched for more than two miles before a crowd estimated at 50,000.

Among former North Little Rock businesses depicted in museum photographs is Jim's Roller Rink, still fondly remembered by longtime residents. The display includes a pair of white roller skates as well as pictures of skaters and the cavernous rink.

The exhibit "From Dark Hollow to the Smithsonian" shows images mainly of Black residents taken mostly in the 1970s by Chinese-American photographer Crystal Huie. Dark Hollow is a historically Black neighborhood stretching some 10 blocks north of the city's Union Pacific tracks and several blocks west of Main Street. Its name evidently came from the absence of street lights. Some of Huie's photos are in the Smithsonian Institution's national collection. 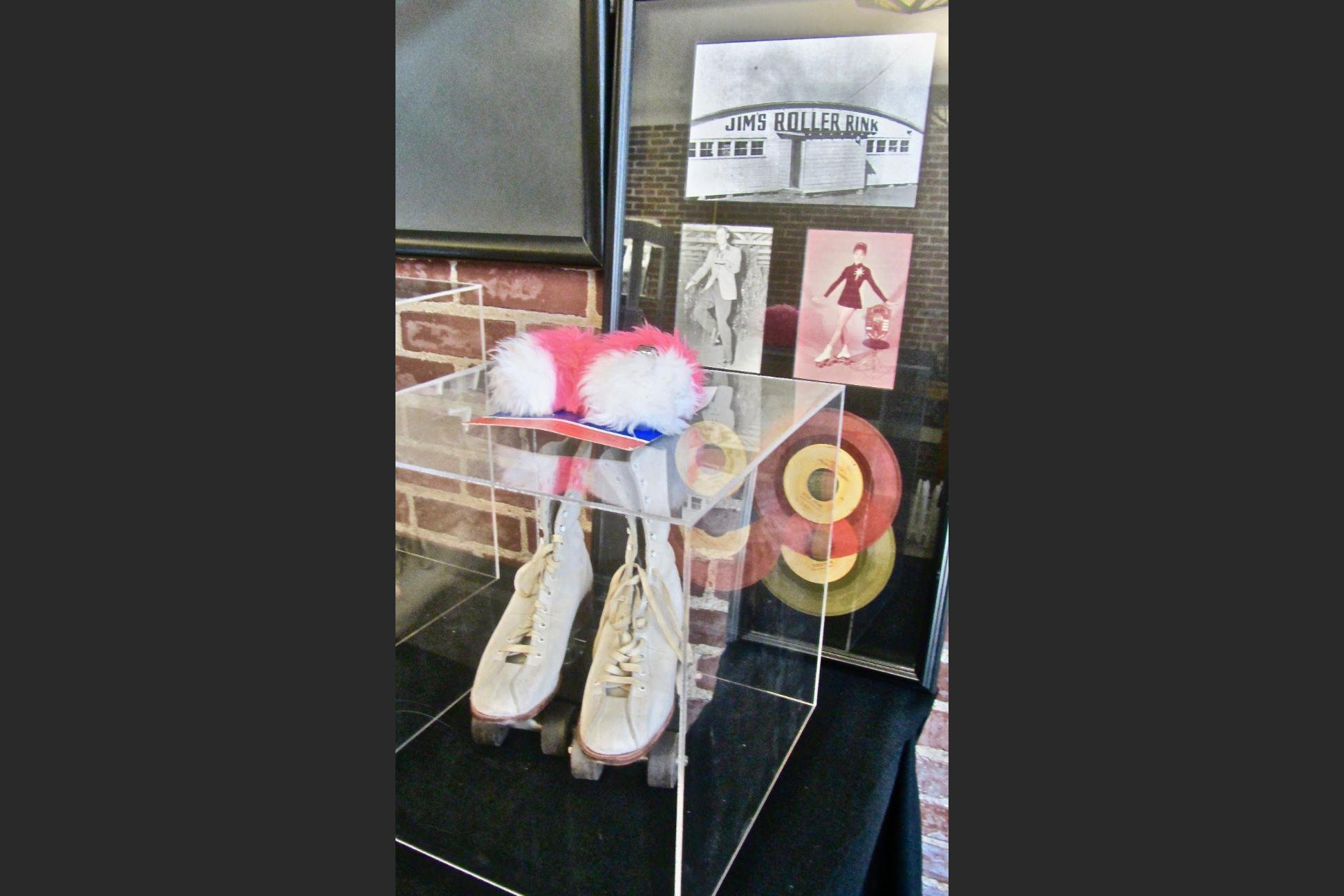 Roller skates at North Little Rock Heritage Center stir memories of Jim’s Roller Rink. (Special to the Democrat-Gazette/Marcia Schnedler)
Black history and culture in North Little Rock are widely surveyed in large panels with titles like "Surviving the Island of Racial Separation," "Cultural Immersion Through the Arts," "From Jim Crow to Civil Rights," "Military: Fighting for the Same Cause," "Sports: A Sense of Community Pride," "Trend Setters of North Little Rock," "Family: The Glue That Binds" and "Resettlement on the North Side of the River."

As for the Dogtown label, a museum posting reports: "One tale of the legend is that Little Rock residents began dumping their dogs to take revenge on Argenta for seceding from the capital city in 1904. John Cook of Argenta Drug Co. wrote, 'The citizens of North Little Rock fed the dogs and adopted them, and the name Dogtown was bestowed.'"