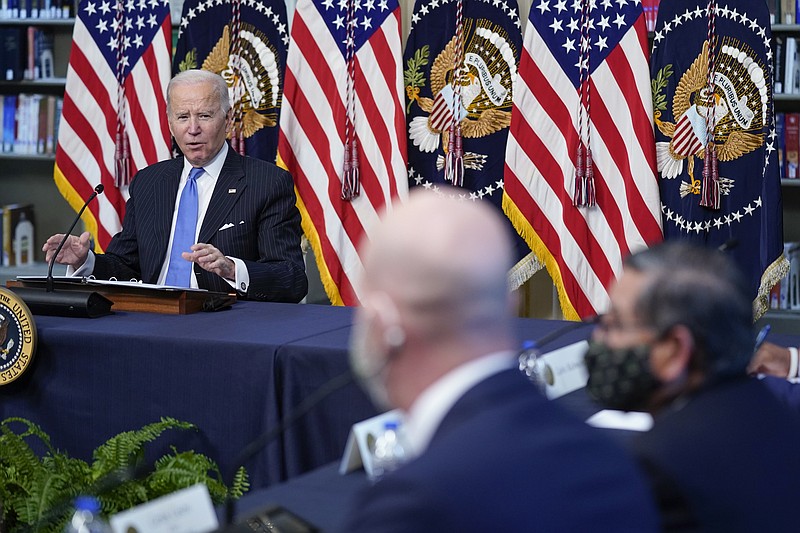 President Joe Biden speaks during a meeting with business leaders about the holiday shopping season, in the library of the Eisenhower Executive Office Building on the White House campus, Monday, Nov. 29, 2021, in Washington, as Josh Silverman, CEO of Etsy, center, and Carlos Castro, CEO of Todos Supermarket, listen. (AP Photo/Evan Vucci)

WASHINGTON -- The Centers for Disease Control and Prevention on Monday broadened its recommendation for covid-19 booster shots to all adults as the new omicron variant is identified in more countries.

The agency had previously approved boosters for all adults but recommended them just for those 50 and older and those who live in long-term-care settings.

Dr. Rochelle Walensky, the CDC's director, said the new guidance reflects the emergence of the omicron variant, which has not yet been identified in the U.S. but that officials say will inevitably reach the country.

[Video not showing up above? Click here to watch » arkansasonline.com/1130omicron/]

President Joe Biden on Monday called the new variant a cause for concern, but "not a cause for panic," and he said he was not considering any widespread U.S. lockdown. He urged Americans anew to get fully vaccinated, including booster shots, and to return to wearing masks indoors in public settings -- a precaution that has fallen out of use across much of the country.

[Video not showing up above? Click here to watch » arkansasonline.com/1130travel/]

He also appealed to the roughly 80 million unvaccinated Americans age 5 and older to get shots.

Biden said it was inevitable that the variant would reach the U.S., but he also said the country has the tools necessary to protect Americans.

When omicron arrives, Biden said, America will "face this new threat just as we've faced those that have come before it."

Biden was joined at the White House by Dr. Anthony Fauci, the nation's top infectious disease expert and the president's covid-19 adviser, who said earlier Monday that scientists hope to know in the next week or two how well the existing vaccines protect against the variant, and how dangerous it is compared with earlier strains.

The variant poses the latest test to the administration's efforts to contain the pandemic, mitigate its impacts on the economy and return a sense of normalcy to the U.S. during the holiday season.

[Video not showing up above? Click here to watch » arkansasonline.com/1130biden/]

The White House said there were no plans to curtail Biden's travel as a result of the new variant.

Biden last week moved to restrict travel from South Africa and seven other countries in southern Africa, effective Monday, in a bid to give scientists time to learn more about the variant, and for more Americans to get vaccinated before it hits the U.S.

As omicron spreads across the globe, White House press secretary Jen Psaki said Monday, "We will continue to assess what steps we need to take to protect the American people."

Some other nations are reinstating severe travel and business lockdowns to prevent the variant from spreading, but Biden indicated the U.S. was not following suit.

"If people are vaccinated and wear their mask, there's no need for lockdowns," he said.

Fauci said earlier on "CBS Mornings" that limiting travel from the countries where omicron was identified "buys you a couple of weeks, because if you can keep things out in force for a couple of weeks, you can do a lot of things."

Pharmaceutical companies are already adjusting their vaccines to better attack the omicron variant, but Fauci said Americans should make it a priority to get either their first shots or a booster dose now rather than waiting for a new formulation.

"I would strongly suggest you get boosted now," he said.

[Video not showing up above? Click here to watch » arkansasonline.com/1130biden/]

He added that depending on what scientists learn in the coming weeks, "we may not need" targeted boosters to contain the new strain.

Biden said the administration is "sparing no effort at removing all roadblocks to keep the American people safe," including working with drug manufacturers on potential new boosters and testing targeted at the new variant.

Any omicron-specific vaccine probably could not begin to be produced for another two or three months, so getting boosters now is a "very important initial line of defense," Dr. Paul Burton, chief medical officer for Moderna, said Monday.

Burton said Moderna and other vaccine companies are testing their vaccines to determine how effective they are against omicron.

"If we need to manufacture an omicron-specific variant, it's going to take some weeks; two to three months is probably what we're looking at to be able to really begin to manufacture," Burton told ABC.

Noting that the new variant, like earlier ones, sprang up overseas in areas with lower vaccination rates, Biden said it was both a moral imperative and in America's self-interest to speed up global vaccinations. He noted that the U.S. has donated more than 275 million doses and is on pace to deliver more than 1.1 billion globally by September 2022.

"Now we need the rest of the world to step up as well," Biden said. "We can't let up until the world is vaccinated."

Meanwhile, the World Health Organization is warning countries that the omicron variant poses "very high" global risk -- and is likely to spread internationally.

"The likelihood of potential further spread of Omicron at the global level is high," the WHO said Sunday in a preliminary technical brief. It recommended that governments worldwide enhance their ability to sequence variants, report any local cases of omicron to the global health body and speed up their vaccination drives.

The newly identified variant has 26 to 32 spike mutations, the WHO brief states, "some of which are concerning" in that they could make it more transmissible and better able to evade the body's immune defenses.

"Depending on these characteristics, there could be future surges of COVID-19, which could have severe consequences, depending on a number of factors including where surges may take place," the report says. "The overall global risk ... is assessed as very high." It added that "evidence for this assessment contains considerable uncertainty" and is subject to change.

The WHO recommends several actions that its member states should immediately take. Some are new, such as guidance on the marker that can be used to detect the newest variant. Some are consistent with well-known measures to stop the spread of the coronavirus, such as advice for governments to encourage people to wear masks, keep a safe distance from one another and avoid crowds to limit the spread of the virus.

As some governments have shut borders and others are reinforcing public health rules, officials around the world stressed that the measures are designed to buy time to learn more about how the variant spreads, what symptoms it causes and how it reacts to existing vaccines.

The WHO's warning came as a widening circle of countries reported cases of the variant and moved to slam their doors in an act-now-ask-questions-later approach while scientists race to figure out just how dangerous the mutant version might be.

Japan announced it is barring entry to all foreign visitors, joining Israel. Morocco banned all incoming flights. Other countries, including the U.S. and members of the European Union, have moved to prohibit travelers from southern Africa.

While no deaths linked to omicron have been reported so far, little is known for certain about the variant, including whether it is more contagious, more likely to cause serious illness or more able to evade vaccines. Last week, a WHO advisory panel said it might be more likely to reinfect people who have already had a bout with covid-19.

Scientists have long warned that the virus will keep finding new ways to exploit weaknesses in the world's vaccination drive.

Spain on Monday became one of the latest countries to report its first confirmed omicron case, detected in a traveler who returned from South Africa on Sunday after a stopover in Amsterdam.

While the majority of omicron infections recorded around the world have been in travelers from abroad, cases in Portugal and Scotland have raised fears that the variant may already be spreading locally.

The omicron infections have underscored the difficulty in keeping the virus in check in a globalized world of jet travel and open borders. Yet many countries are trying to do just that, against the urging of the WHO, which noted that border closings often have limited effect and can wreak havoc on lives and livelihoods.

Others, including Fauci, have argued that such restrictions can buy valuable time to analyze the new variant.

While the initial global response to covid-19 was criticized as slow and haphazard, the reaction to the omicron variant came quickly.

Late last week, von der Leyen successfully pushed the 27-nation EU to agree to ban flights from seven southern African nations, similar to what many other countries are doing.

Cases have been reported in such places as Canada, Germany, Britain, Belgium, Denmark, the Netherlands and Portugal, where authorities identified 13 omicron infections among members of a professional soccer team.

Taking no chances, Japan, which has yet to detect any omicron cases, reimposed border controls that it had eased earlier this month.

"We are taking the step as an emergency precaution to prevent a worst-case scenario in Japan," Prime Minister Fumio Kishida said.

Israel likewise decided to bar entry to foreigners, and Morocco said it would suspend all incoming flights for two weeks.

Britain reacted by expanding its booster program to everyone 18 and older, making millions more people eligible. The U.K. has reported about a dozen omicron cases.

Despite the global worry, doctors in South Africa are reporting that patients are suffering mostly mild symptoms so far, but they warn it is early. Also, most of the new cases are in people in their 20s and 30s, who generally do not get as sick from covid-19 as older patients.

Information for this article was contributed by Zeke Miller, Jamey Keaten, Raf Casert, Mari Yamaguchi and staff members of The Associated Press; and by Annabelle Timsit of The Washington Post. 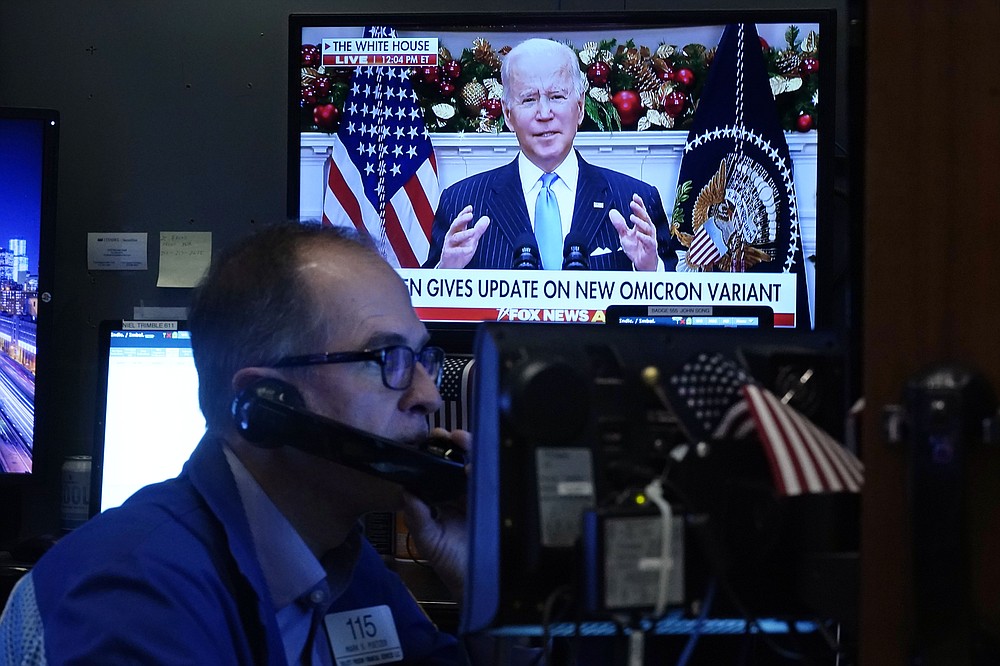 President Jose Biden appears on a screen as trader Mark Puetzer works on the floor of the New York Stock Exchange, Monday, Nov. 29, 2021. President Joe Biden urged Americans to get vaccinated including booster shots as he sought to quell concerns Monday over the new COVID-19 variant omicron. (AP Photo/Richard Drew)