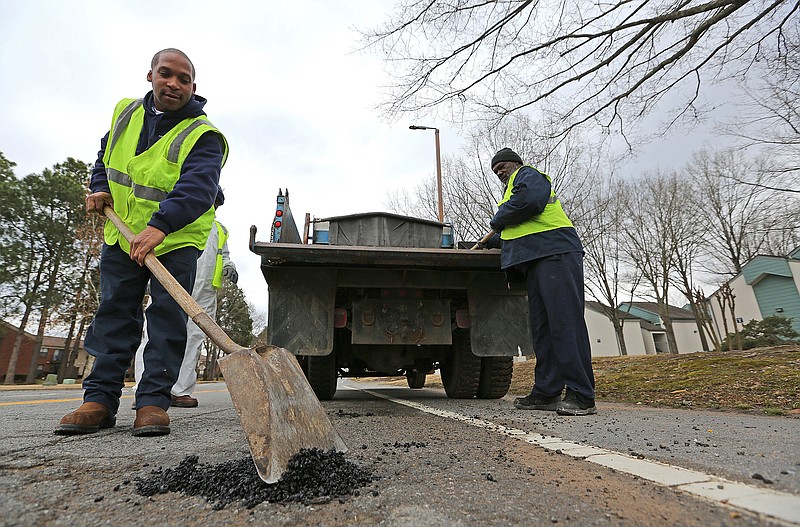 Hiring struggles have continued at Little Rock City Hall as managers face the combination of retirements, the effects of the covid-19 pandemic and a shortage of job applicants amid a competitive U.S. labor market, according to officials.

Part of the problem is that baby boomers are retiring out of the workforce, according to Kathleen Walker, the employment services manager in the city's Human Resources Department.

The phenomenon was expected, she said in an interview with other officials Tuesday.

"It's not like it's a big surprise," Walker said. "So between the covid and the aging, a lot of people have just made the decision to retire, and that's also impacted police and fire quite a bit."

While the city in the past might have hired 10 or 20 people in the Fire Department each year, officials are hiring 30 or 40 per year, Walker said.

Little Rock employs more than 2,000 full-time personnel between the city's general fund, which serves as the main operating account, and additional city funds. The police and fire departments account for the lion's share of the municipal workforce.

Walker suggested that "it's a challenging climate for law enforcement."

City leaders are weighing a 2% across-the-board salary increase for municipal employees as part of the proposed 2022 budget. Next year's budget is set to come before them for final approval in December.

The pay boost would be the first in several years and would occur on top of the regular step-and-grade pay increases negotiated by local unions on behalf of their members.

Additionally, the city board in August authorized a spending resolution for some 60% of the first tranche of federal aid Little Rock received from the American Rescue Plan Act. The resolution included spending approximately $3.2 million on one-time bonuses: $1,500 for eligible full-time employees and half that amount for those working part time.

[NEWSLETTER: Sign up for the Week in Little Rock email at arkansasonline.com/emails]

During a recent second-quarter financial report presented by Little Rock Finance Director Sara Lenehan, city board members were told that 172 positions authorized in the general fund were unfilled at the end of June.

The latest vacancy count fell just short of the high-water mark of 173 vacancies in February for the period encompassing July 2020 to June 2021, according to the presentation.

During the financial report, Lenehan reiterated that vacancies could be seen across all departments.

A note on a slide that was displayed at one point said that when accounting for additional vacancies in positions authorized in the city's street and enterprise funds, the grand total for vacancies was 257.

Though Walker noted the effects of the covid-19 shutdown, such as the furloughs of some part-time workers and enhanced employment benefits, she said officials knew several years ago they would begin experiencing a higher number of retirements.

A lot of people had delayed retirement after the 2008 market crash while they waited for their investments to recover and then made the decision to retire, she said.

Amid an extreme shortage of individuals with the necessary license, Honeywell said the city needs those individuals to operate garbage collection trucks as well as a lot of the heavy equipment they use in the street department.

He described a struggle to get applicants for the jobs.

Even when the city has secured employees, because of the competitive employment landscape, "they may stay with us for a little while and then find [an]other source of employment who pay them a little bit more money, and they would leave and go to do that job," Honeywell said.

Earlier this fall, the city moved to have the commercial driver's license positions get paid a minimum of $18 an hour, Honeywell said, which officials saw as the competitive line.

Officials experienced some success from the pay increase as far as receiving applications, Honeywell said, though he noted it has always been a position that experiences turnover.

The other type of job for which the city is experiencing challenges is entry-level laborer positions, he said, describing how it might take weeks for Little Rock to get an applicant for the job.

Individuals in those positions could be expected to patch potholes, mow and maintain ditches and right-of-way, and collect litter, he said, "so it may not be as attractive to some people" compared to Amazon or other industries that have moved in recently and are paying a competitive wage.

For her part, Walker said each department has a different set of circumstances that make the hiring puzzle difficult to address.

Information-technology jobs are difficult to fill in Arkansas, she said. The same is true for planners.

"Planners are not drawn to central Arkansas," Walker said. "They want to go to Northwest Arkansas."

In August, the city had to temporarily suspend the collection of yard waste for a short time, a decision that occurred because covid-19 and other factors collided, according to Honeywell.

On top of the open positions, some employees were out unexpectedly because they tested positive for covid-19 or had potentially been exposed. Around the same time, others were unavailable because of their scheduled vacation or leave time, Honeywell said.

The shortage of drivers occurred on the garbage-collection side, he explained, "so we had to pull yard-waste drivers to come drive garbage trucks to do the garbage collection."

The city had to sacrifice the yard-waste collection to make sure the actual garbage was picked up, he said.

Since then, Little Rock has enacted the pay increase for the positions holding the commercial driver's license and has addressed how vacation and leave are handled internally, according to Honeywell.

With regard to the proposed 2% pay increase, Honeywell noted that many individuals are members of the union for public-sector employees and therefore fall under the step-and-grade system of guaranteed pay increases.

Nevertheless, he described the proposed raise as a positive move and said those employees not covered by step-and-grade would get their first raise in four or five years.

Walker suggested the proposed raise would have the greatest impact on those non-union positions in departments like finance and Human Resources, as well as managers and engineers under Honeywell in Public Works.