Decision pending on whether Little Rock police chief, attorney will have to pay opponents' $48,000 legal bill 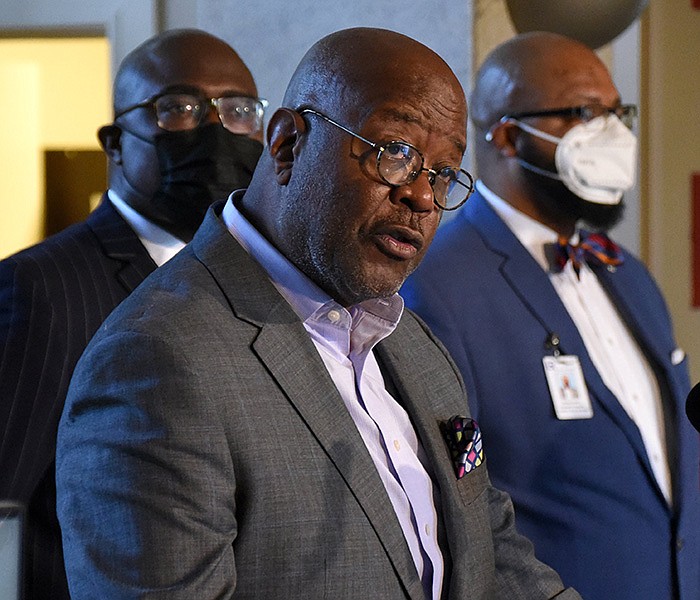 A decision remains pending in federal court as to whether Little Rock Police Chief Keith Humphrey and his attorney Michael Laux will face sanctions and be ordered to pay approximately $48,000 in legal fees incurred by a police union because of a now-dismissed lawsuit the chief filed against his opponents.

Humphrey filed the original complaint, which was later amended, on Sept. 30, 2020, after the chief had weathered a series of legal complaints filed by colleagues in the Police Department who primarily claimed retaliation related to the aftermath of a 2019 police shooting.

In the countersuit filed in U.S. District Court for the Eastern District of Arkansas, Humphrey claimed that leaders of the largest local police union -- the Little Rock Fraternal Order of Police, Lodge No. 17 -- along with many others had conspired to oust him from his job.

Part of the judge's stated rationale was that the chief's claim of free-speech retaliation did not apply because Humphrey was a public employee when he made statements expressing his policing philosophy prior to starting as chief in Little Rock.

After the judge's ruling, Laux suggested that the claims could be refiled because the complaint was dismissed without prejudice.

When reached via email this week, Debby Linton Ferguson, an attorney representing the police union and its leaders, said she could not tell when the judge might rule on the pending motions for sanctions and attorney's fees.

"As I'm sure you've seen, COVID has caused a lot of delay in the court system," Ferguson wrote. "Unfortunately, I don't know when to expect the Court to rule."

In late August, attorneys for the police union filed a motion for sanctions, arguing that Humphrey and his attorney advanced claims that were made for an improper purpose, unwarranted by existing law and lacked evidentiary support in violation of Rule 11 of the Federal Rules of Civil Procedure.

Targeting the chief's amended complaint for an alleged failure to properly cite existing law, attorneys for the police union in a supporting brief wrote that on at least nine occasions, Humphrey "makes a vague attempt at arguing his claims are warranted by existing law without citing any statute, case law, or other authority."

Claims grounded in the law governing equal protection and civil rights conspiracy were unfounded because they each must be filed against a state actor, which the union and its leaders are not, the brief said.

Statements by Humphrey as to his policing philosophy were not protected speech under the First Amendment because they were made in his capacity as chief of police, the brief said, despite the claim that Humphrey made the statements when he was a private citizen before his hire date with Little Rock.

Attorneys later wrote that the complaint appeared to be an attempt to retaliate against the union and its members for their advocacy work on behalf of officers, arguing that the judge should conclude it "is simply an attempt to harass and intimidate the [union]."

The brief asked for sanctions against Humphrey and Laux in an amount to be determined by the court, and for the costs and fees incurred by the union and its leadership defending against the lawsuit.

In late September, after the lawsuit had been dismissed, Moody in an order filed Sept. 29 denied a motion from Laux for leave to file a declaration in response to the pending motion for sanctions, writing that the plaintiff had missed an earlier deadline to file the response.

In a motion for attorney's fees filed the same day, attorneys for the Fraternal Order of Police requested that Humphrey and Laux be ordered to pay just more than $48,000, or another appropriate amount, to cover their legal expenses.

In a reply to the motion, Humphrey's lawyer wrote that it could be established that Humphrey was not employed in his previous job as chief of the Police Department in Norman, Okla., at the time he gave a post-resignation speech in which he discussed his policing philosophy.

Laux included a declaration signed by Humphrey in which the chief said his last day as a Norman employee was April 3, 2019, and a farewell speech in which he discussed his policing philosophy took place two days later when he did not have his firearm and was not wearing his badge.

The firearm was given back to him April 5 as a gift after it was engraved by colleagues, the declaration said.

Additionally, Laux argued that union leaders were engaged in joint activity with the state, making the complaint reasonable even if the court were to hold the union and its members were not state actors proper.

The intention with the argument was "not to relitigate prior rulings but, rather, to evidence his good faith in bringing his non-frivolous lawsuit," the response filed by Laux said.