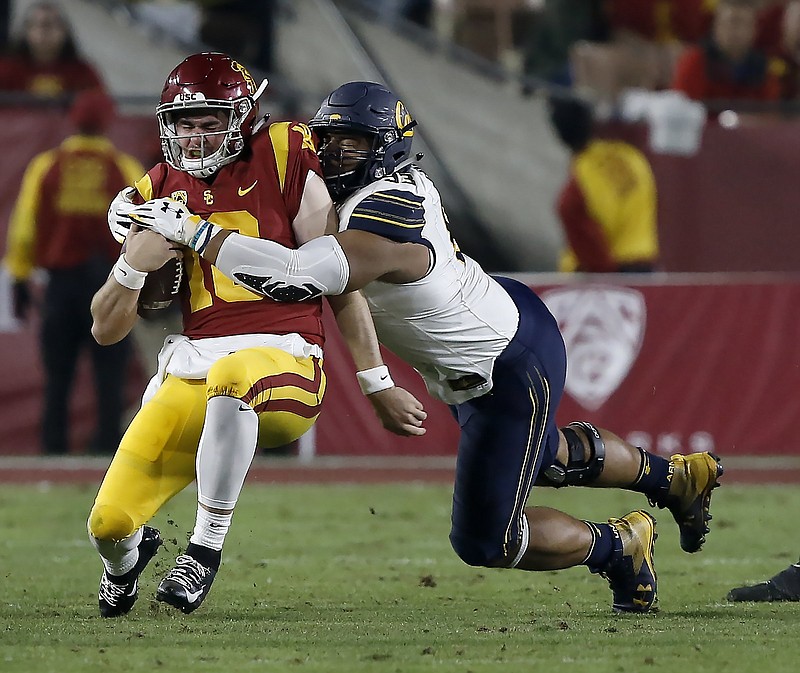 Former Little Rock Catholic standout Luc Bequette (right), who redshirted at Cal as a freshman in 2015, is returning to the Bears after a year at Boston College. He is among players taking advantage of extended eligibility the NCAA granted players because of the coronavirus pandemic. (AP file photo)

Luc Bequette redshirted after first getting to Cal as a freshman back in 2015. The 24-year-old defensive end is now finishing his college career with the Bears after a full season away at Boston College.

Thad Mangum is in his second season with South Florida after five years at Wofford College, where his anticipated senior season ended with a knee injury in the 2019 season opener. The defensive lineman has 32 tackles for the Bulls, and had a 20-yard catch in their last game.

Minnesota defensive tackle Micah Dew-Treadway, at 315 pounds bigger than Bequette and Mangum, redshirted twice during four seasons at Notre Dame, first as a freshman in 2015 and again the next year because of a foot injury. He joined the Golden Gophers as a grad transfer in 2019.

Those massive defenders aren't your average super seniors. They are wrapping up their seventh seasons of college football.

The defensive tackle has played in 50 games for the Bears, including four in 2016 before an injury that led to a medical redshirt. He also started all 11 games last year at Boston College, where he went after the Pac-12 initially called off the 2020 season before later reinstating it.

Sixth-year players are common this season after the NCAA granted an extra year of eligibility to all fall athletes last year because of the pandemic that led to seasons being delayed, shortened and, in some cases, even canceled for some teams. But that also opened the door for some players to stay even longer after they had already been granted an extra year above the usual five years to complete four seasons.

When these seventh-year players were high school seniors in 2014, some of their current college teammates were sixth-graders. That was the first season of the four-team College Football Playoff, when Ohio State won the title with running back Ezekiel Elliott, now a two-time NFL rushing champion with the Dallas Cowboys.

Bequette, the son of 1988 Olympic bronze medalist and two-time national champion figure skater Debi Thomas and former University of Arkansas lineman Chris Bequette, arrived at Cal during Jared Goff's senior season. The quarterback was the No. 1 overall pick in the NFL Draft the following spring and Goff, like Elliott, is now a two-time Pro Bowler in his sixth professional season.

"He's a mature guy age-wise, but just how he handles himself, he's given us really good play on the field, leadership in the locker room," fifth-year Cal Coach Wilcox said of Bequette, who played for Little Rock Catholic. "It's a unique story, and he's just a good guy to be around. He's good for our program, it's good for the younger players."

There is even an eighth-year player this season: 26-year-old linebacker Jared Folks, who has 74 tackles for FCS playoff team East Tennessee State (10-1). He already has a bachelor's degree in communications, a masters in marketing and is finishing up his MBA degree.

After Folks redshirted in 2014 at Temple, he tore his right labrum during preseason practice and missed the following season. He was a starting linebacker for six games in 2016, but injured his left labrum and had surgery after that season. He appeared in only one more game for the Owls after that.

Folks had six sacks in 2018 as a redshirt senior after transferring to East Tennessee, and the school appealed on his behalf to the NCAA for a sixth year of eligibility for the time missed at Temple because of injuries. He got yet another NCAA waiver after being sidelined most of 2019 because of a groin injury. That took him into the 2020 season that didn't count against anybody, and for the Buccaneers became a six-game season in the spring of 2021, when he had 50 tackles and was the Southern Conference defensive player of the year.

Miles Fox, a defensive lineman and team captain for No. 21 Wake Forest, played 12 games as a true freshman at Old Dominion in 2015, and then started nine of his 11 games as a sophomore and all 12 games a junior. After four games of his senior season in 2018, he took advantage of a new NCAA rule that allowed him to redshirt and preserve that year of eligibility and went to Wake Forest as a grad transfer.

Fox tore his Achilles tendon during spring practice and missed the 2019 season. He had a team-high 10 1/2 tackles for loss when earning his fourth varsity letter in 2020, and has 30 tackles with three sacks in what now essentially is his fourth senior season.

Among the 32 seniors SMU will recognize before its home finale Saturday is seventh-year linebacker Richard Moore, who took advantage of the extra year after playing only four games the past two seasons because of reconstructive knee surgery.

Moore started some games as a true freshman for Texas A&M in 2015, then played 11 games as a sophomore before transferring to SMU, where he had to sit out 2017. After a team-leading 92 tackles in his Mustangs debut in 2018, he tore his ACL in practice before the fourth game of the 2019 season.

"Yeah, I'm still here," the 24-year-old Moore told the Dallas Morning News with a laugh earlier this season. "A lot of people couldn't do it. Maybe I'm crazy, or maybe I'm chasing greatness, or a combination of both. I don't know, but it's what I want to do and I'm thankful to be where I'm at." 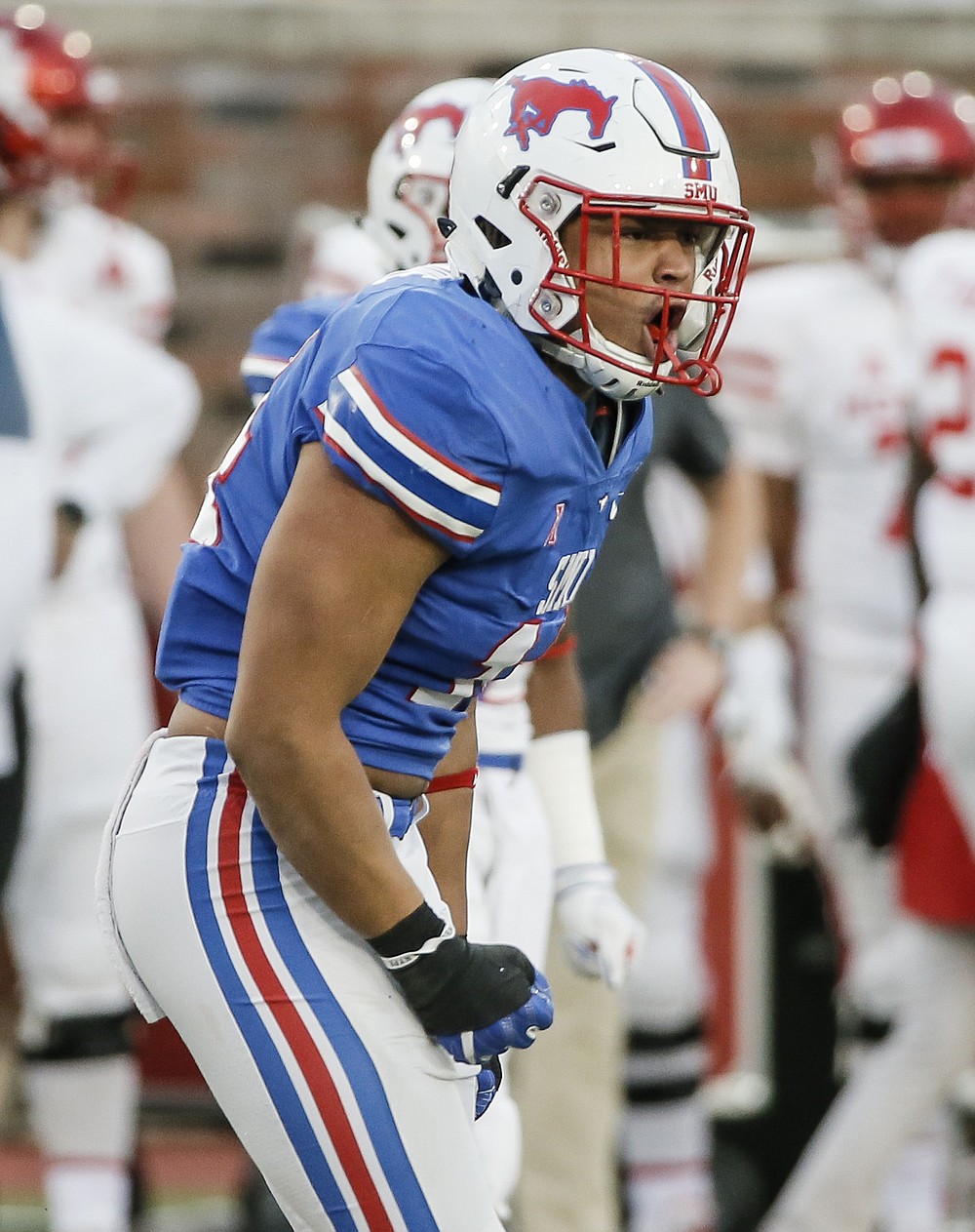 SMU linebacker Richard Moore (14) celebrates sacking Houston quarterback D&#x27;Eriq King, not pictured, during the first half of an NCAA college football game, Nov. 3, 2018, in Dallas. Among the 32 seniors SMU will recognize before its home finale Saturday, Nov. 27, 2021 is seventh-year linebacker Richard Moore, who took advantage of the extra year after playing only four games the past two seasons because of reconstructive knee surgery. (AP Photo/Brandon Wade)