Rogers' past worth remembering, kept alive by interested historians 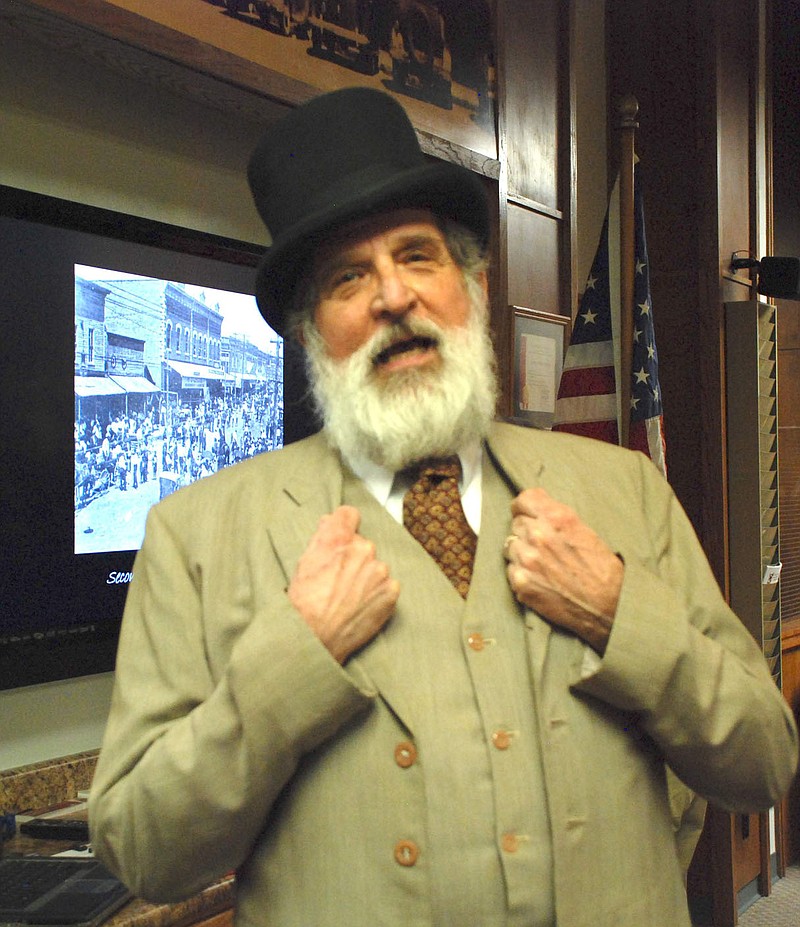 For many years, local citizens met at Gary Townzen's barber shop in Rogers to talk about a variety of topics, including history as they remembered it -- and some even came in for a haircut. So, of course, I did much of my research there when working on my first book about Rogers. In late 2009, Gary and I decided that these memories from senior citizens needed to be recorded and preserved for future generations. We worked with the Rogers Historical Museum and organized a club, whose purpose was to have a speaker or speakers present a program once a month on any subject, as long as it was about Rogers history. It was recommended that the program last from 30 minutes to an hour, and it could be a talk and/or have pictures, slides, artifacts or any other enhancements that the speaker desired.

We decided that there would be no rules -- other than being civil and loving Rogers -- no officers, no dues, no food or drinks, only members sharing memories and stories. All of the meetings were recorded by the Rogers Historical Museum and stored for future reference.

With the help of the museum, the first meeting of the History Club was held at the Old Post Office Annex of the museum on Jan. 14, 2010. To start off the club, even though I did not grow up in Rogers, I spoke on the Monte Ne Resort and its founder, Coin Harvey. There were 17 people present, including noted Rogers citizens John Hawkins, John Ford, Clarice Moore, Marilyn and Larry Collins, Randy McCrory, John Burroughs, Myra Moran, Tom Jones and Emery Davis. After the presentation, there was a very interesting and spirited discussion among participants about childhood memories of Monte Ne.

By the next meeting on Feb. 18, 2010, word had gotten around, and many more folks attended. For this meeting, we had an excellent speaker who had intimate knowledge of one of the most historical and important events in Rogers' history. Gary Townzen introduced Clarence Leis, the second manager of the very first Walmart in the world, which began at 715 W. Walnut St. This store was an experiment by Sam Walton, who already had 18 Ben Franklin Five & Dime stores in Arkansas and surrounding states.

Leis told interesting and humorous stories about the first Walmart. "At first, there were only a few wood shelves around the walls; everything was stacked on tables or lined up on the floor in rows. When an item was returned, like a lawnmower, I would take it home and repair it in my garage, then bring it back and sell it. In the early days, we were strapped for money and sometimes had a hard time making payroll," he said. "My wife Betty and our kids were used to helping out, and on Sundays after church, we would go to the store (closed on Sunday) and Betty would straighten up all of the material while the kids did various jobs. On Saturdays, we were running over, and I would call Betty and she would bring the kids to help. Danny was the oldest and ran one register, while Gary was younger and had to stand on a pop box to run another register. The other two little ones sacked."

The store took off, and Sam Walton began building more Walmarts in surrounding cities. Each new store required a manager, and Leis trained many assistants who were then transferred to manage a new store. Leis managed Store No. 1 from 1962 until 1975.

The third speaker was Kay Calvin Sanford, who grew up and lived in the Harris Hotel from 1943 until she left for college in 1957. She told the story of her father, Forrest Calvin, showing her their new home when she was 4 years old. My father said proudly, "Kay, your new home is called the Palace of the Ozarks. You get to live in a palace!" "Living in this fairy tale building was a little girl's dream come true," she said.

By this time, the meetings of the Rogers History Club was packed with folks, with 60 to 70 participants eager to hear about life in Rogers from the 1940s through the 1970s.

The fourth meeting was a field trip to the Callison-Lough Funeral Home on Walnut Street. The director, Jason Engler, gave tour of the historic home and carriage house of H.L. Stroud and talked about the early days of A.D. Callison's funeral business. Callison started his business at 117 W. Walnut St., but in 1932 he moved his entire funeral business to the Stroud home at 408 W. Walnut St. "There have been thousands of people cared for here; the list reads like a 'who's who' of Rogers and Northwest Arkansas," Engler said. "One of most famous persons prepared for burial here was William 'Coin' Harvey in 1936."

For many years, the upstairs of the home was used as an apartment to house the funeral directors. Engler resided there from 2008 until 2011. I asked him if he knew of any strange or mysterious occurrences associated with the funeral home. "When I lived there and was away on trips, people would see lights and folks moving around in my apartment," he said. "There was never any evidence of an intruder, but it was strange. Probably the most interesting occurrence was the appearance of a lady dressed in blue at various funerals over the years. No one ever knew who she was, why she was there, or where she went."

The topic at the October 2010 meeting was a slide show by Jim McWhorter, whose family in 1938 bought the property at Monte Ne formerly owned by Coin Harvey. The farm consisted of 140 acres including the amphitheater (called the Pyramid by local folks) and Big Spring, the lagoon, Coin and Mae Harvey's log home, and assorted minor buildings.

The Pyramid was a popular attraction for locals and visitors alike, and people came from all across the country to witness Coin Harvey's amazing creation. Also, each summer, as many as 200 girls and their families converged on Camp Joyzelle -- a summer camp that catered to affluent girls -- just south of the amphitheater. At the time during the 1950s, Jim and his sister, Sandra, established a thriving business during the summer by taking advantage of the popular location and the visitors. Jim cleaned up the shady area around the pyramid and rented picnic tables and canoes. They opened a concession stand at the entrance and sold snacks and soft drinks. According to Jim, these business ventures were very lucrative for a teenage boy, and he saved over $600 (a tremendous sum in the 1950s) in one summer alone. Jim's story of the McWhorters at Monte Ne ended in the early 1960s with the arrival of Beaver Lake. The Pyramid was covered with water, and the farm was sold.

Other speakers during that first year included Pat Harris on the Harris Hotel and Harris Bakery when his father, Earl Harris, owned them in the 1940s and '50s; Clarice Strode Moore on the early vinegar business in Rogers with stories about the Rogers Vinegar Co., Speaco, and other family owned businesses; Dr. Gaye Bland and John Burroughs with the Rogers Historical Museum presented a film about Rogers in the 1950s, "America's Heartland"; Don Clark, the son of Cactus and Lavonne Clark, talked about the beginning of the Lakeside Restaurant, Lake Atalanta pool, and skating rink; and Dave Dubell and members of the Pelphrey family spoke about Pel-Freez moving to Rogers in 1951.

The second year of the Rogers History Club featured more excellent speakers, among them Grace Hill, an educator who taught and led Rogers schools from 1946 until she retired in 1981. She recounted flawlessly the history and expansion of Rogers schools during her lifetime. I listened to her amazing memories and thought how fortunate we were to have this living encyclopedia of information about our schools.

The following year, we had more noted speakers, and you can see why the Rogers History Club was, and is so popular. I could write a book about the exploits and adventures of each and every one, but my column limit has been exceeded. The History Club continued through the years until today, and I hope to write future columns chronicling the memories and adventures of more of Rogers' amazing citizens.