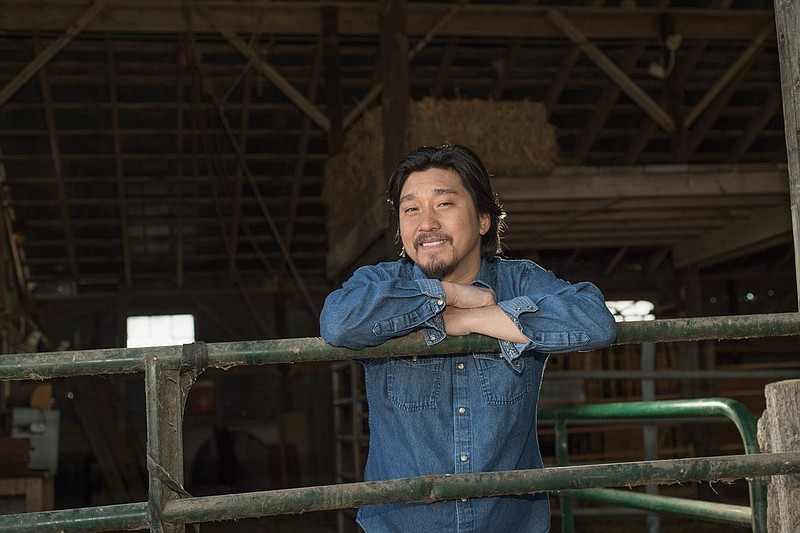 Chef Edward Lee certainly was marinated in his own melting pot of food as culture.

"I grew up in Brooklyn in an immigrant neighborhood, so I was exposed to lots of different cuisines at a young age," says Lee, a Korean-American who is the author of "Smoke & Pickles" and "Buttermilk Graffiti: A Chef's Journey to Discover America's New Melting Pot Cuisine." "I watched my grandmother cook every day in our home kitchen, and I still remember the smell of her cooking."

PBS describes Lee, featured on Season 3 of "The Mind of a Chef," as "one part Southern soul, one part Asian spice, and one part New York attitude," saying his "culinary style draws inspiration from his Asian heritage, his New York training, and his embrace of the American South." His cuisine, which came to popularity at a Louisville, Ky., restaurant called 610 Magnolia, has earned him a finalist nomination for the James Beard Foundation Awards Best Chef: Southeast in 2011, 2012, 2013 and 2014, according to his biography. He has been featured in Esquire, Bon Appétit, GQ, Gourmet among many other publications; won on Food Network's "Iron Chef America"; was a favorite on "Top Chef: Texas, Season 9"; and has appeared on shows ranging from Cooking Channel's "Foodography" to Andrew Zimmern's "Bizarre Foods America."

"What if everyone read the same book and then joined all those readers in talking about it? That's the idea behind One Book," states the ALA website. "A state or city chooses a book and encourages everyone in that area to read the book and discuss it." According to the J. William Fulbright College of Arts & Sciences website, "its success on campus and in the community prompted Chancellor G. David Gearhart to provide the project with a permanent budget, drawing on money from private donations to the Chancellor's Fund" helping "build a program that enriches our students' education and becomes a memorable experience for the entire community."

Previous selections have included "The Hate U Give" by Angie Thomas, "What It's Like to Go to War" by Karl Marlantes, "The Working Poor" by David Shipler and "The Devil's Highway" by Luis Urrea.

Lee says he has "always been obsessed with food, and I don't remember a time wanting to be anything other than a chef." But his love affair with Southern food and the city of Louisville started when he went to the Kentucky Derby in 2001 and spent the rest of his time there cooking at 610 Magnolia. It took him just over a year to leave New York and step into what PBS calls "the dialogue of the blossoming New Southern food scene."

The title of his book, "Buttermilk Graffiti," was "poetic shorthand for my life," Lee says in the introduction. "Buttermilk is the iconic ingredient of the American South, one that I not only learned to cook with but grew to love. Graffiti is the art form that first inspired my identity, the thing that connects me to the memories of my youth in Brooklyn in the 1980s. Each word by itself is important but one-dimensional. When they come together, though, they become the full story of who I am."

Lee says it was the book tour for "Smoke & Pickles" that showed him America and "gave me a perspective I'd never had before."

"I ate great food everywhere I went, but more than that, I listened to beautiful, unlikely stories told by people from many walks of life, stories that were not necessarily about food, but that helped me put what I was eating into a greater cultural context."

By way of example, Lee tells the story of Clarksdale, Miss., where he found the best soul food in town came from the local Chinese restaurant and the Lebanese influence in the community meant you could find dishes like kibbeh at a local diner. In Lowell, Mass., he says, there were more Cambodian restaurants than in New York City, just as there were more Korean restaurants in Montgomery, Ala. And in Houston, people lined up early to eat Nigerian cooking made by a former Nigerian prince who moved to Texas in 1997 to work as an agricultural engineer.

As Lee writes about his experience in Clarksdale: "This is America. Maybe not the white picket fence version we are used to seeing, but the one that exists in every town just beneath the surface, embodied by the diversity in the labor economy."

For Lee, with success came responsibility. In 2018, in response to the #MeToo movement, Lee launched the "LEE -- Let's Empower Employment" initiative with the goal of diversifying the culinary arts. But when the pandemic hit, he led a transition to feeding hungry, out-of-work people from his industry from the kitchen at 610 Magnolia. By Memorial Day 2020, Imbibe Magazine reported, the effort had grown to 19 relief kitchens serving more than 200,000 meals to those struggling in the restaurant industry.

"When [covid-19] happened, I knew immediately this was going to be a problem and people were going to go hungry," Lee told Imbibe. "From a logistical standpoint, it was very easy to pivot, because we had the blueprint, and we certainly had the manpower: I'd laid off 100 people, so I was able to retain some of my key employees and say, 'Do you want to go into relief mode?'"

The crisis pointed out several urgent needs in the restaurant industry, Lee told Imbibe, among them "a safety net, we need to be more aligned, we need a lobbyist, we need unification, we need to be a collective voice that can speak to government."

"We're a trillion-dollar industry, but no one sees it as that," he told Imbibe. "I think that's what this crisis has really shown: both the greatness of what independent restaurants can do, but also the flaws, which is that we're not unified, we're hundreds of thousands of independent agents. This exercise ... has shown that we can be a unified voice, protect each other, and protect ourselves."

In "Buttermilk Graffiti," Lee says "the words authenticity and tradition are bandied about a lot in the food world." Authenticity can be exclusive, he says, while tradition is a concept he endorses.

"We are nothing without our traditions," he says in the introduction to "Buttermilk Graffiti." "Our identities are formed from them. I have never been conflicted about the beauty of the traditions my family follows. I still eat Korean rice cake soup on New Year's Day, as was the tradition in my house when I was growing up, and I also love Thanksgiving dinner with all the trimmings." His favorite comfort food? Fried chicken.

The danger, he says, is using tradition as a way to elevate one people's culture over another.

"My kimchi bologna sandwich is just as tasty as your mortadella muffuletta," he writes, "and your tofu cacciatore is just as good as your mother-in-law's version from Tuscany. In the short but incredibly rich history of American food, we are all writing our own encyclopedia entries."

For Lee, the biggest legacy of watching his grandmother in the kitchen is not a recipe but an attitude.

"She made everything from scratch and with love," he says. "She always had 10 different dishes and sauces going on at the same time. It was my first education in food."

He also learned his definition for American cuisine: "Any food that has come to our shores from another land and has had to adapt to local ingredients and sensibilities."

"Everyone can cook, it just takes practice. Everyone cares, you just haven't found the right recipe."

Becca Martin-Brown is Features editor for the Northwest Arkansas Democrat-Gazette. Email her at [email protected] 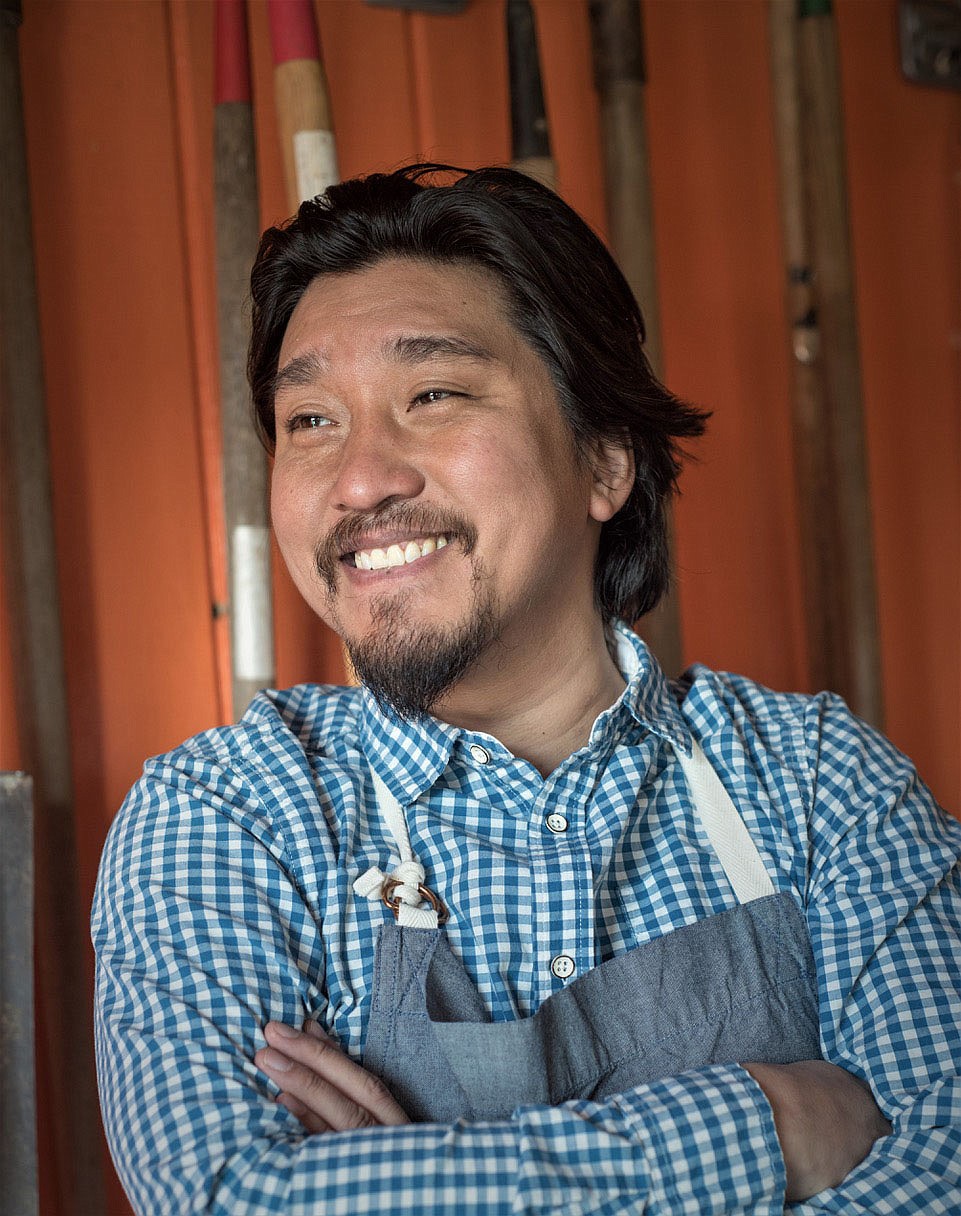