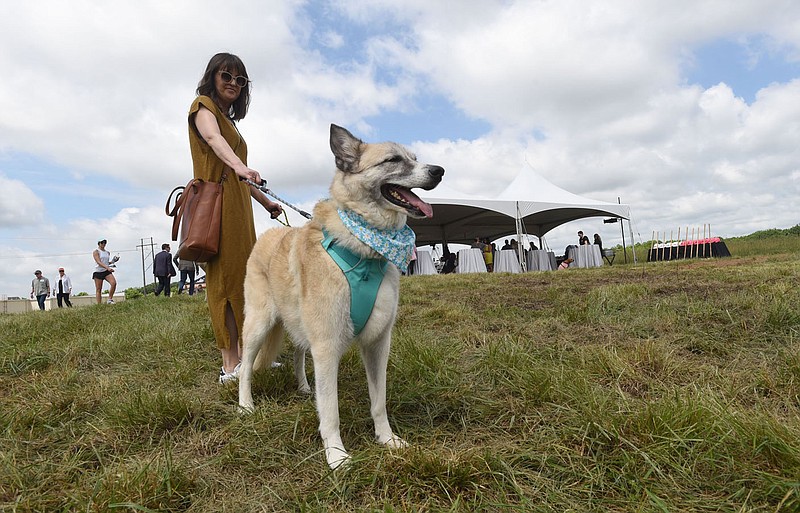 Guests can sign their names on the steel beam that will support the facility then watch it get raised into place, according to a news release. The "Raise the Woof" event is from 10 to 11:30 a.m. Dec. 3 at 1312 Melissa Drive, according to the release.

Coffee and other warm drinks will be provided by Third Space, the future on-site cafe partner. A short program and the beam raising will take place around 11 a.m. The event will be held rain or shine, according to the release.

The center will fill critical local service gaps in Northwest Arkansas as the largest facility for animals in the region and will serve an estimated 13,000 dogs and cats each year, according to a news release issued in May when a groundbreaking event was held.

The center is adjacent to Founders Classical Academy. It will be about 20,000 square feet on 6 acres to be owned by Best Friends, according to the May release.

The cost of raw building material went up $2 million, so the new, final goal for the total capital campaign -- including building costs, land donation and $2 million for operations -- is $19.8 million, said Hannah Stember, public relations manager for Best Friends Animal Society. Best Friends has $18.3 million in committed gifts, putting it at 92.4% of its goal, Stember said.

The Walton Family Foundation provided an $892,500 grant for architectural design and engineering of the center, according to a December 2019 release that announced plans for the center.

The center is based on a concept called community-supported sheltering, where community members, government leaders and shelters all play a role in animal welfare rather than just the shelter alone. It focuses on services that aim to prevent pets from entering municipal shelters in the first place while also integrating public health and social services -- creating a holistic approach that helps the shelter, the pets within it and the community it serves.

Through collaboration and community involvement, this model provides better support for pet owners, efficiency in the shelter, and more life-saving outcomes for pets, according to the May release.

Services to be offered at the pet resource center include a medical clinic, life-saving, transport, pet ownership retention, rehabilitation and an educational space.

Construction is moving along on the building. HFA is the engineering firm and Baldwin & Shell Construction is the general contractor. It's projected to open next summer, according to the May news release.

Stember said the foundations have been poured and waterproofing has been applied, all under-slab utilities have been completed and retaining walls were expected to be done Nov. 22. Steel delivery began Nov. 15 and will begin to go up this week. Concrete stair work is expected to be complete at the end of the month, and courtyard concrete work will begin this week.

Best Friends Animal Society, founded in 1984, is a leading animal welfare organization working to end the killing of dogs and cats in America’s shelters by 2025. Best Friends has helped reduce the number of animals killed in shelters from an estimated 17 million per year to around 347,000, according to bestfriends.org .