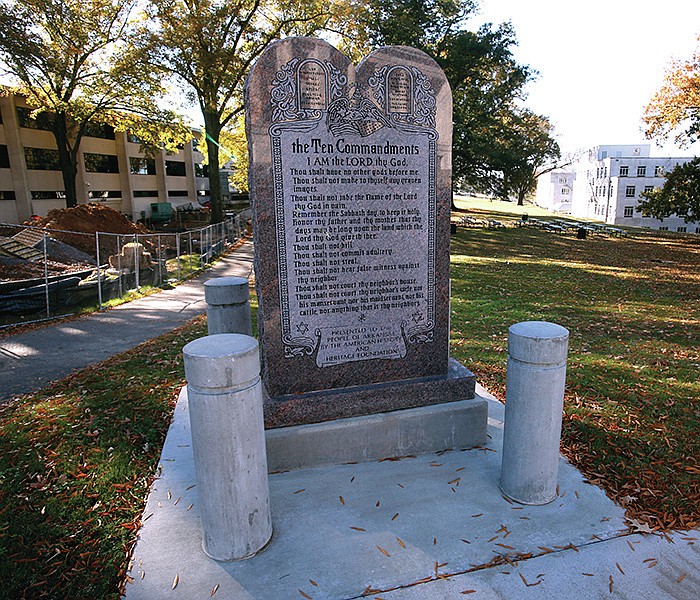 The Ten Commandments monument on the grounds of the state Capitol in Little Rock on Tuesday, Nov. 23, 2021. (Arkansas Democrat-Gazette/Thomas Metthe)

As a federal lawsuit filed over a Ten Commandments monument placed on the grounds of the state Capitol passed the halfway point through its fourth year, attorneys continued to wrangle over discovery issues at a hearing on Tuesday.

The lawsuit, Cave et al v. John Thurston, was originally filed against then-Secretary of State Mark Martin on May 23, 2018. On June 25, 2018, it was merged with a similar lawsuit, Orsi et al v. Martin, which was filed the same day. Both lawsuits contend that the monument violates the First Amendment by establishing governmental preference of one religion above all others.

The first Ten Commandments monument was installed at the Capitol on June 27, 2017, but was toppled within 24 hours by a man who rammed it with his vehicle and was later found mentally unfit to proceed to trial. A replacement monument, surrounded by 3-foot-tall concrete posts, was installed April 26, 2018.

The monument has been a lightning rod for controversy since passage of the Ten Commandments Monument Display Act by the General Assembly in 2015, which authorized construction of the monument on Capitol grounds.

Michael Cantrell, an attorney with the office of the Arkansas attorney general, representing Secretary of State Thurston, accused attorneys for the Satanic Temple, an intervenor in the case, of not turning over relevant documents sought by his office. Cantrell said requests for documents pertaining to the Satanic Temple's identity and financial organization had not been turned over and that the organization had mounted conflicting claims as to why the information should not be given.

Matt Kezhaya, attorney for the Satanic Temple, maintained that all documents sought by Thurston's attorneys had been turned over as ordered.

"I'm a little bit confused about what the defendant is seeking," Kezhaya said. "We provided the articles of incorporation; we provided the bylaws for the Satanic Temple Inc."

He said it appeared to him that the state was seeking articles of incorporation and bylaws from all affiliate entities of the Satanic Temple Inc.

"None of this has been made clear to us," Kezhaya said. "It's our position that we've given over everything that is relevant; we've certainly turned over everything the court ordered. ... I can't give over things that are unclear."

Cantrell accused Kezhaya of being less than forthcoming, however, about the role of the Satanic Temple Inc. in the lawsuit to the exclusion of other entities, saying the organization is active in a number of areas through its affiliate entities and local chapters.

Kezhaya responded by saying he would turn over any documents ordered by the court but that he was still not clear exactly what documents were being sought.

"Without that information, I cannot meaningfully respond," he said.

Another issue arose around a subpoena issued to Kim Hammer, a Republican state senator from Benton, ordering him to produce documents sought by the Satanic Temple. A subpoena has also been issued to another Republican state senator, Bob Ballinger of Ozark. Both Hammer and Ballinger have been ordered to turn over correspondence sent through private email accounts pertaining to the construction of the monument at the Capitol. To date, both have filed objections to the subpoenas.

Baker said she will schedule another status conference sometime in late December or early January.