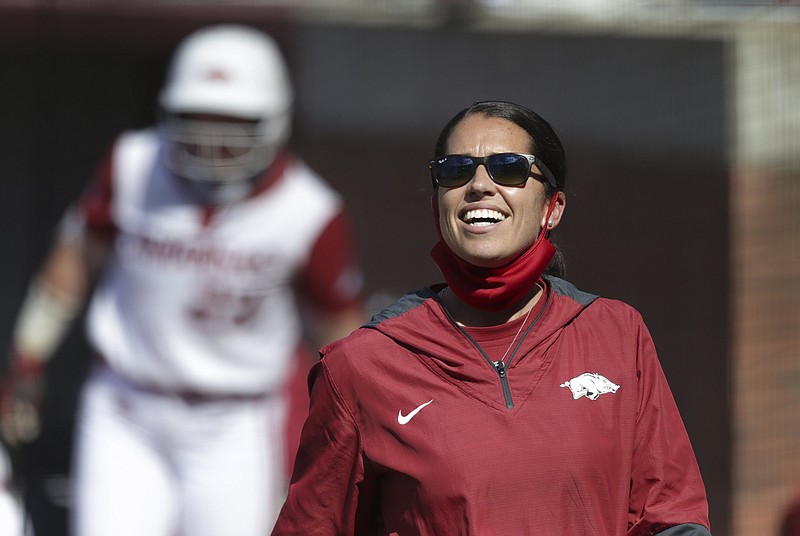 The University of Arkansas softball team is coming off its best season in program history and the future looks bright as the Razorbacks' recent signing class was rated No. 1 in the country by Extra Inning Softball.

The nine-player group hails from seven states stretching from New York to California. Twin sisters Lauren and Hannah Camenzind from Nebraska are both headed to Fayetteville, in addition to Kiki Estrada of Chino Hills, Calif., who is considered the top first baseman in the class. Infielder Atalyia Rijo also has family lineage that stretches to Major League Baseball.

The excitement in Arkansas Coach Courtney Deifel's voice is evident when talking about the class.

"We really have a little bit of everything, and they're all very, very good," said Deifel, who will be entering her seventh season at Arkansas in the spring. "We have some speed. We have some outfielders. We have the top first baseman in the class, one of the best lefty hitters. We have three that can pitch that are all very different."

Estrada committed to Arkansas when she was in the eighth grade and held firm, but none of the others committed until much later.

Outfielder Reagan Johnson from Karnes City, Texas, will supply the speed element Diefel talked about. She's stolen 109 bases in her high school career without being caught. Hannah Camenzind could be a two-way impact player, both in the circle and at the plate. She could play first or in the outfield when not pitching. Her sister, Lauren, could have an effect just about anywhere, Deifel said.

"She has the athleticism to literally play anywhere on the field except pitcher," Deifel said.

Pitcher Robyn Herron, a left-hander from Tampa, Fla., has the same pitching coach as current Razorbacks standout Mary Haff. Rijo is a middle infielder, who had initially committed to Virginia but re-opened her recruitment and chose Arkansas. Her cousin is Jose Rijo, who earned World Series MVP honors in 1990 while pitching for the Cincinnati Reds. Her father, Fernando, also pitched in the minor leagues.

Last season, the Razorbacks claimed a share of the SEC regular-season title for the first time in school history. Deifel acknowledged the success had an impact on the recruiting trail.

"We have the competitive success, obviously it's going to help in every aspect of recruiting, when you actually do what you said you could do," Deifel said. "Before our reputation is what we had to go off of."

With rosters shifting because of the pandemic, this recruiting class will be the one to replace a group that's helped put the Razorbacks on the softball map. But Deifel said it could be up to the task.

"This is the group that will replace Hannah McEwen and Linnie Malkin and Danielle Gibson," Deifel said.

"When you look at what that class is, it's a pretty tall order to have to replace them. And we feel like we've done that. We do feel like they are a very talented class and we're really excited about them."

The Razorbacks open the season in the Puerto Vallarta College Challenge on Feb. 10 and host Wichita State in the home opener a week later.

COMMENT Ranked No. 24 in Extra Inning Softball’s 2022 Extra Elite 100. … Hit .611 with 11 home runs in her junior season. … Missed two high school seasons because of the pandemic and an injury.

COMMENT Named USA Today Colorado Player of the Year. … Has a career pitching record of 72-8 with a 1.92 ERA in 522 2/3 innings pitched. … Has struck out nearly 800 hitters in four years as a high school pitcher.

COMMENT Earned a top-10 ranking in Extra Inning Softball’s 2022 Etra Elite 100. … Hit .556 with a .619 on-base percentage as a junior and began playing high school softball as an eighth-grader. … Cousin of former Major League pitcher Jose Rijo, while her father, Fernando, pitched in the minor leagues for 11 seasons.