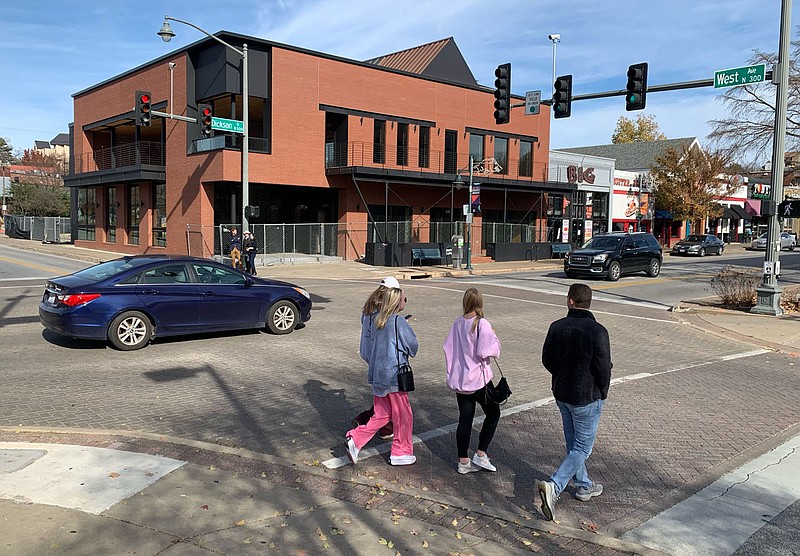 The former Hog Haus Brewing Company building at the northeast corner of Dickson Street and West Avenue in Fayetteville, seen Friday, Nov. 19, 2021, will soon be home to a new occupant. Tin Roof, a Nashville-based restaurant and music venue, plans to move into the space by spring. Visit nwaonline.com/211120Daily/ for today's photo gallery. (NWA Democrat-Gazette/Andy Shupe)

FAYETTEVILLE -- A restaurant and music venue that started in Nashville, Tenn., wants to complement the entertainment already scattered around downtown.

Tin Roof, established in 2002, plans to move into the former Hog Haus building at the northeast corner of Dickson Street and West Avenue. Owner Bob Franklin said he hopes to open in the spring.

Franklin said he got a call from the building's owners to come take a look at the building and liked its design and location. He also toured the area, going to shows at George's Majestic Lounge, Kingfish, JJ's Grill and others.

"We're really going to be more complementary than anything to those places," Franklin said. "That's the best thing about a really good live music community."

The building still needs work to accommodate Tin Roof, such as a stage, kitchen, bar and patio seating, Franklin said. Exposed brick on the inside will remain, he said.

"We're confident that we're going to do it justice with what we do there. We think people are going to like it," he said. "We're going to open up those windows out onto Dickson Street, so it'll really connect to the street."

The building was constructed around the early 20th century as Bates Brothers market, which remained in business until 1955, according to the book "Once Upon Dickson" by Tony Wappel and Ethel Simpson. It was home to Ozark Brewing Co. for years, known locally as the Brew Pub. In 2004, the Brew Pub changed ownership and became Hog Haus. Owner Julie Sills closed Hog Haus in October 2018 and put the space on the market.

Tin Roof opened on Demonbreun Street near Music Row in Nashville and has branched to 16 other locations, including San Diego, St. Louis and Cincinnati. Franklin said the business also is planning locations in Kansas City, Mo.; and New Orleans.

The idea of the place is to have somewhere musicians can foster a community on and off stage, Franklin said. Musicians who play at one Tin Roof are invited to play at the others, he said. Each location also has a full bar and food menu with tacos, quesadillas, burgers and sandwiches.

Brian Crowne, owner of George's Majestic Lounge, said the music business has a variety of viable markets. Whether it's ticket-oriented venues such as his, "weekend warrior" places that help local musicians get consistent pay for gigs or stadiums hosting popular national acts, there's room for everyone, he said.

Any new business that puts live music to the top of mind only benefits the surrounding venues, Crowne said.

"I'm excited to have a new business neighbor and a tenant on the street that appears to have a great brand to add to the mosaic that makes up Dickson Street and our entertainment area here in downtown Fayetteville," he said. "I don't like to see closed store fronts. I tend to agree that a rising tide raises all ships."

Tin Roof will have to get a permit from the city's Planning Commission in order to have live music. The commission is set to consider the permit Dec. 13.

Information sent to the city includes planned hours of 11 a.m. to 1 a.m. daily, with four, full-time employees and 10 to 15 part-time employees. Peak number of patrons is expected to be about 200.

Franklin said he's aware of the city's plans to build the cultural arts corridor downtown. The Walton Arts Center parking lot will become the corridor's gathering space. Multistory mixed-use buildings are planned for the southwest and northwest corners of Dickson Street and West Avenue. The city is about to get started on building a new parking deck north of the planned buildings.

Franklin said he saw the plans for the intersection as a selling point to open his business in the city.

"Our hope is to be part of the community," he said. 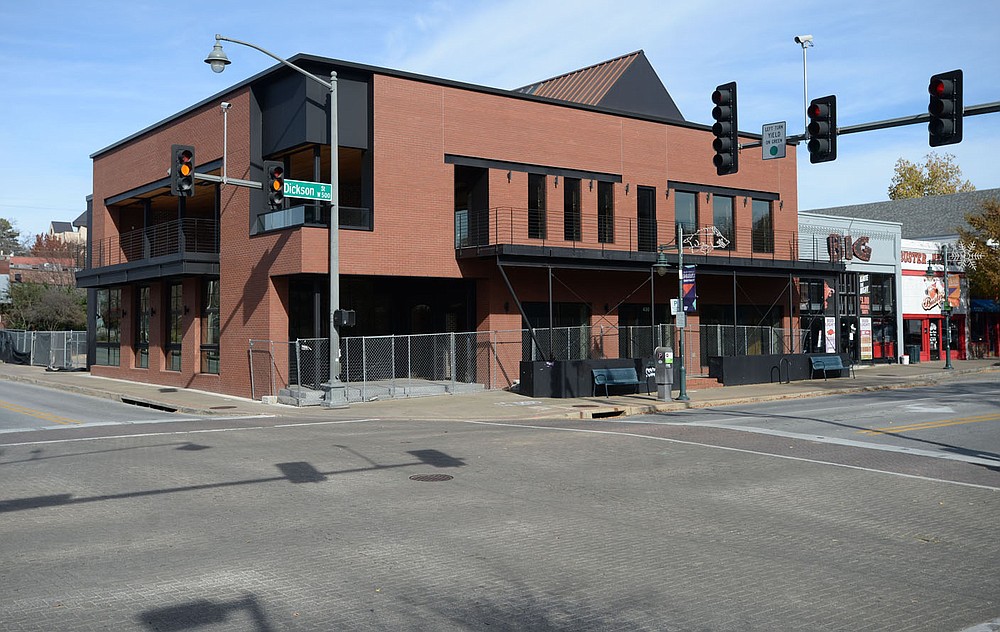 The former Hog Haus Brewing Company building at the northeast corner of Dickson Street and West Avenue in Fayetteville, seen Friday, Nov. 19, 2021, will soon be home to a new occupant. Tin Roof, a Nashville-based restaurant and music venue, plans to move into the space by spring. Visit nwaonline.com/211120Daily/ for today&#x27;s photo gallery. (NWA Democrat-Gazette/Andy Shupe)

For more information about Tin Roof, go to: