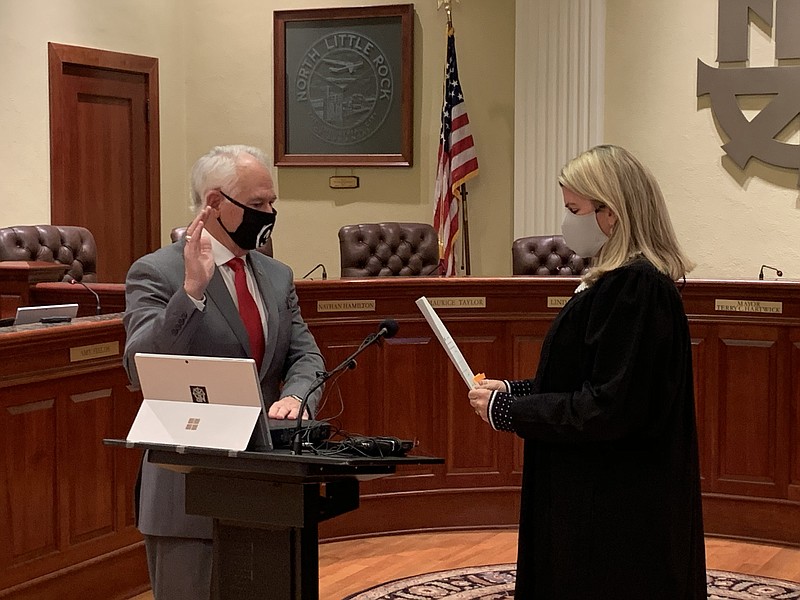 Terry Hartwick is sworn in as mayor of North Little Rock by Judge Paula Jones on Friday, Jan. 1, 2021 in the City Council chambers.

NORTH LITTLE ROCK -- North Little Rock officials are looking to the past as a guide for the future budget.

In hopes the city's pandemic problems are long gone, Mayor Terry Hartwick is studying pre-covid-19 times as a road map for what's ahead for North Little Rock.

With the pandemic easing into the normalities of life, Hartwick said the city is looking to revenue projections from 2019, not 2021 or 2020, as a guide.

When the city was budgeting last year, many expected North Little Rock to take a significant revenue hit as struggling restaurants and bars had seen their numbers go down amid the pandemic.

Members of the council have been mulling over the proposed 2022 budget since last week's meeting. The council will meet again Nov. 22, before their regularly scheduled meeting, to review the 2022 budget.

Hartwick is calling for a 2.5 % increase in salaries for city employees as the city has struggled to keep and recruit personnel.

Many city employees have crossed the Arkansas River for higher-paying jobs in Little Rock. In October, the city's electric department lost four linemen who resigned to take a job with a contracting company. Employees from other departments can be hard to retain especially when Little Rock pays better.

"We lose them to Little Rock sometimes because they pay more and I hate that," Council Member Jane Ginn said. "People don't want to leave, but when they're offered, you know, more money it's tempting."

While the pandemic hit the city hard in the spring and summer of 2021, many businesses rebounded as residents looked to eat out again with covid-19 case counts down.

"I was concerned about whether there would be enough tax money coming in from the restaurants to make the budget work, but it worked out just fine," Ginn said.

Even a fully passed budget can be only a rough guide to how the city will spend its money in the year to come.

The original 2021 budget the council passed in December 2020 went $7.1 million over budget due in large part to the $5 million the city paid for the Blue Cross Building.

City staff currently housed at the city services building in Argenta will move to the Blue Cross Building at 515 W. Pershing in June. The proposed budget calls for $500,000 in improvements for the site before the city moves its offices there.

Hartwick said the city will look to sell the city services building in Argenta to help offset the cost of the purchase and move.

The largest chunk of the proposed budget is for police at $26.4 million, making up roughly 30% of expenditures in the general fund. The proposed budget calls for a little more than a $1 million increase for police, with much of it going toward salary increases, pensions and overtime wages.

The proposed budget also calls for an $878,502 increase in the parks fund, bringing it to $9.3 million. Much of the new spending is proposed for maintenance, special projects and the Arkansas Inland Maritime Museum.

Additional revenue not on the budget also could be on their way as Hartwick said he will push for a referendum in 2022 for a half-percentage-point increase in the city's sales tax. Hartwick wouldn't say what a potential sales tax increase would fund other than possibly parks, public works projects and police.

In 2017, voters approved a referendum to increase the city's sales tax by 1 percentage point to pay for the new justice center, which will house the city's Police Department.

The North Little Rock City Council will likely vote on a new budget in December.