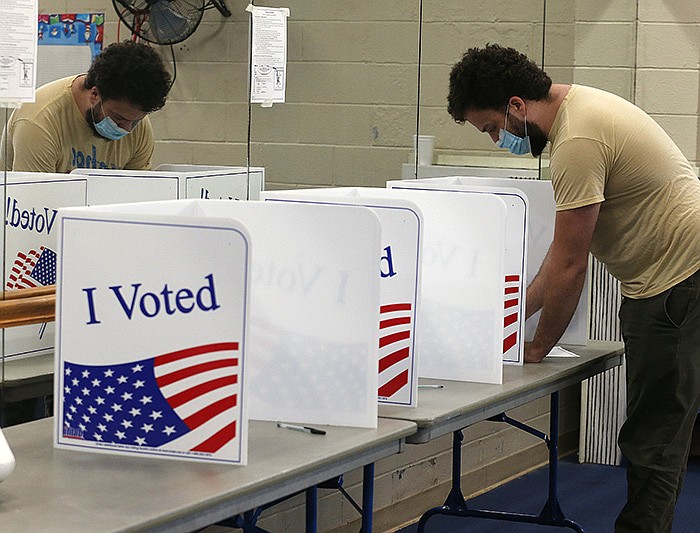 Nicholas Jaeger fills out his ballot Tuesday on the tax proposal for the Central Arkansas Library System at his polling place at Dunbar Recreation Center in Little Rock. (Arkansas Democrat-Gazette/Thomas Metthe)

Voters in favor of the increase propelled the regional library system's campaign to victory with roughly 71% of the vote.

Supporters of the millage increase had a wide lead when results from early and absentee ballots were released, and the lopsided outcome did not change as election-day ballots were counted. Complete but unofficial results from the Pulaski County Election Commission were:

Turnout represented 5.68% of Little Rock's more than 120,000 eligible voters, according to the commission.

Library officials had requested the increase earlier this year to help stabilize the budget over a long-term period.

Expanded facilities and the cost of digital materials led them to seek more money from Little Rock's property-tax base. Additionally, officials had sought to move away from a past reliance on bond proceeds as a way to supplement the materials budget.

The increase from 3.3 to 3.8 mills represents the first boost in the library system's Little Rock millage rate that funds operations since a 2007 referendum. Library officials anticipate the millage increase to generate $2.3 million to $2.4 million per year.

A millage is a property-tax device commonly used by schools and libraries. Each mill is equivalent to the dollar amount paid on every $1,000 of the tax-assessed value of a piece of property.

Residents outside Little Rock who nonetheless live within the library system's service area will not see their millage rates change.

Members of the Little Rock Board of Directors in August voted to call the special election at the request of the library system and gave their symbolic endorsement to the increase with a resolution approved last week.

Revenue lagging behind expenses, new facilities added since the last operational millage increase and a lending framework for digital materials that is less favorable to libraries when compared with lending physical books all contributed to the budget squeeze, library system executive director Nate Coulter has said.

Adding to the dilemma was the library system's recent decision to no longer use bond proceeds to fund the materials budget.

And although he never portrayed the system's financial situation as a crisis or emergency in his public comments in the run-up to the millage referendum, Coulter suggested that the budgetary gap would need to get addressed eventually.

In a statement released earlier this month and timed to coincide with the start of early voting, Coulter wrote that a third of the additional revenue would help ensure the library has books, including popular titles. Funding also would bankroll pay increases for front-line staffers and programmers, in addition to technology upgrades and deferred maintenance work, he wrote.

"One of the largest drivers of the need for an increased investment in operating revenue is the escalating cost of providing digital content, particularly e-books and audiobooks," Coulter wrote. "The annual cost to the library of providing these has risen from $242,000 in 2015 to $580,000 this year. That's over a quarter of the budget for materials."

Tuesday's referendum for the library system followed on the heels of successful Nov. 2 referendums on tax items for the Little Rock and Pulaski County Special school districts. It also came after the failure of the Sept. 14 referendum in Little Rock on a sales-tax increase championed by Mayor Frank Scott Jr.

In a phone interview after unofficial results were released Tuesday night, Coulter said he was grateful to voters for turning out.

He said he felt "what they did emphatically reaffirmed their commitment to sustaining the first-rate public library system that we've built."

Coulter said the library's offerings across the city and online "are extraordinary in many ways because of the long-standing commitment and generosity of the voters here," as well as the devotion of the library staff.

He said the library system will continue to be a prudent steward of the additional operating revenue entrusted to it by taxpayers.

Had it not been for the pandemic, the library system likely would have asked voters to approve the millage increase in 2020, Coulter suggested.

Money from the increased millage rate will start coming into the library system next spring following the adoption of local and county property-tax measures that reflect the new rate, he said.

Approximately 91% to 92% of the Central Arkansas Library System's $19.7 million annual budget is drawn from the property-tax revenue in the service area, according to Coulter. About 81% of that revenue comes from Little Rock.