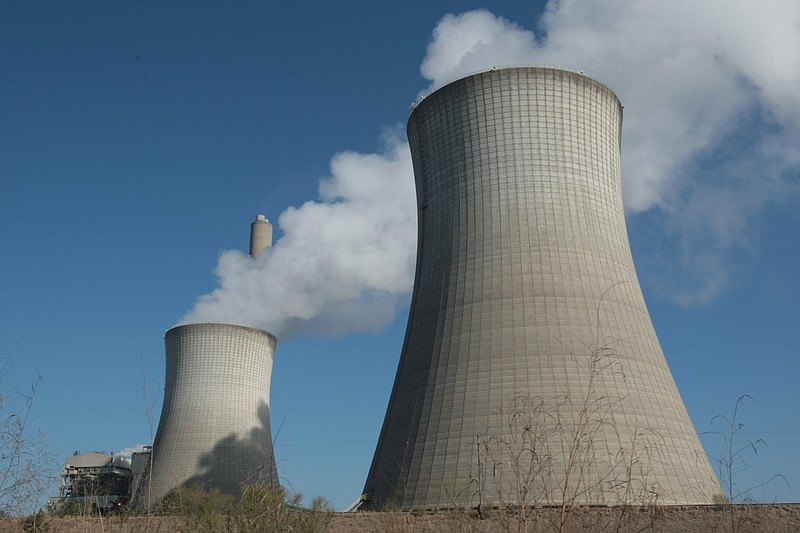 The White Bluff power plant near Redfield is shown in this March 2009 file photo. The coal-fired plant, which was built in 1980, provided nearly 20 percent of Entergy Arkansas' power in 2008. In its 2021 Integrated Resource Plan, Entergy Arkansas reaffirmed that its "cease-to-use coal efforts" included closing the plant at White Bluff by 2028. (Arkansas Democrat-Gazette file photo)

Entergy Arkansas is moving away from previous plans to add natural gas-powered turbines this decade in favor of more renewable resources, according to its 2021 Integrated Resource Plan.

Environmentalists in the region said this change will decrease the demand for fracked gas used in these turbine operations. Fracking, or hydraulic fracturing, is a technique used to enable the extraction of natural gas or oil from certain types of rock.

Many national environmental advocates oppose fracking, pointing to evidence that it "poses serious threats to our health, environment, and climate future," according to the Natural Resources Defense Council's website.

Over 722,000 residential, commercial, industrial and governmental customers across 63 Arkansas counties rely on Entergy for their electrical needs.

The Integrated Resource Plan, or IRP, is required every three years by the commission, which regulates the service and rates of those utilities subject to its jurisdiction in Arkansas.

The document covered 2023 to 2042 and is meant to provide insight into the company's long-term planning process for meeting future demand and energy needs. It also includes action plans starting this year, such as completing the acquisitions for the Searcy, Walnut Bend and West Memphis solar facilities as construction is completed and preparing to deactivate Lake Catherine gas plant unit 4 in 2025.

Entergy spokesperson Brandi Hinkle said via email that the company's analysis for the 2021 Integrated Resource Plan showed that renewable resources represent the best combination of cost, reliability and environmental sustainability for meeting the load and energy requirements of Entergy's Arkansas customers.

Plans filed in 2018 with the commission included building a gas plant this decade, but this is not in the 2021 plans.

Methane, the primary component of natural gas, is a potent greenhouse gas that over a 20-year period absorbs 86 times more heat than carbon dioxide, which is why the Sierra Club advocated against these investments as an intervenor in the planning process, according to a Nov. 3 news release from the environmental organization.

"It is good to see Entergy pivot away from a substantial investment in fracked natural gas in its final IRP compared to its initial draft. The risks of gas are well documented, including volatile price spikes and widespread failure during the February freeze, environmental destruction caused by fracking, and releases of dangerous methane emissions during the extraction, transportation, and burning of gas," Glen Hooks, Sierra Club's Arkansas Chapter director, said.

Hooks said that gas is not a bridge to a sustainable future and must be excluded from utility goals to reach net-zero emissions because of the changing climate.

"Because IRPs are non-binding, it is my hope that Entergy Arkansas avoids gas investments in the future and focuses on a clean energy portfolio that can deliver reliable and low-cost energy to its customers," he said.

Entergy officials have said it plans to reduce its carbon emissions from its operations over the next three decades to net-zero by 2050, according to the 2021 Integrated Resource Plan and previous statements.