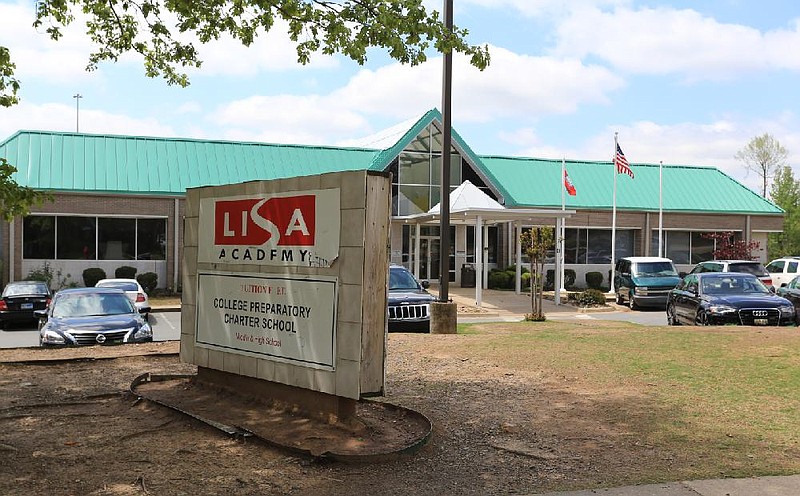 The LISA Academy at 21 Corporate Hill Drive, Little Rock, is seen in this April 2013 file photo.

The LISA Academy Public Charter Schools system, the largest charter system in the state in terms of campus numbers, is again looking to expand -- this time into Fayetteville.

The charter system is seeking final approval from the Arkansas Board of Education at its 10 a.m. Wednesday meeting to open three schools in north Fayetteville, starting with elementary grades in August 2023. The middle school for grades six through eight would open in August 2024, and the high school would follow in August 2026.

The proposal -- which would be an amendment to LISA Academy's state-issued charter -- includes a request to increase the system's student enrollment cap over the next nine years by 1,168 students, from 5,632 to 6,800. The system's current enrollment is about 3,600.

The state's Charter Authorizing Panel reviewed the amendment proposal last month and approved it, with no member of the public or representatives of the surrounding or nearby school districts speaking in opposition to it.

The Education Board has the authority now to either accept the charter panel's recommendation or conduct its own review of the proposal before making a final decision.

All three of the proposed schools would be housed in two newly constructed buildings at West Van Asche and South McGuire streets.

LISA Academy Public Charter Schools will lease the buildings from KLS II Leasing, which will construct and own the buildings. KLS, an affiliate of the Walton Family Foundation, will charge the system 12% of the state funding that the three schools receive.

KLS is currently constructing buildings for LISA Academy elementary, middle and high schools on one site in Rogers. The Rogers location will open to elementary pupils in August, with a middle school and high school to follow. The Rogers site on Horsebarn Road was selected because of its accessibility to Rogers and Bentonville.

Luanne Baroni, assistant superintendent and director of communications for the LISA Academy charter system, said last week that system leaders were attracted to the idea of opening schools at the north Fayetteville site in part because of the growing population in the area and because the site would be accessible to families in Fayetteville and Springdale.

"We wanted it to be accessible to Springdale because parents at our Springdale campus would really like a high school for their students to attend," Baroni said about the Fayetteville site.

That Springdale school started out as the Ozark Montessori Charter School, but it struggled to operate. The Little Rock-based LISA Academy initially partnered with Ozark Montessori and ultimately acquired the campus to make it part of the LISA system.

"We had received multiple inquiries over the years asking if we were going to expand and build a system [in Northwest Arkansas]," Baroni said. "Our Springdale school came about because there was a struggling school that needed help, and so we helped them. That was successful there, and so we felt comfortable in going ahead, with moving ahead, with future plans for that part of the state."

The proposed location of the LISA schools in Fayetteville had prompted questions from Charter Authorizing Panel member Naccaman Williams of Springdale.

Williams complimented the charter school leaders for their academic program but said the planned site is not close to residential areas. He wondered how school operators would attract a racially and ethnically diverse student body.

"This is extremely north Fayetteville," he told his panel colleagues. "It's far from where a diverse population lives" in either Springdale or Fayetteville. "It's almost in the middle of nowhere."

"You are going to have to have a really good recruitment plan to get a diverse enrollment," Williams told the school planners.

Hasan Sazci, assistant superintendent and principal of LISA Academy's Springdale campus, told Williams that the site is close to Interstate 49 and Arkansas 71-B, as well as to Washington Regional Medical Center and the Northwest Arkansas Mall, among other businesses. Sazci said the site is within 20 minutes of residential centers -- even Farmington, south of Fayetteville.

Baroni told Williams that the system is already working with a professional advertising agency to make sure recruitment efforts will reach all of the different population groups.

She also noted that early plans for LISA Academy Elementary West in Little Rock had raised similar concerns about attracting students from minority groups but that the school now has the highest minority population and the highest level of students from low income families in the charter system.

"We were very persistent," she said about recruitment to the school in west Little Rock.

LISA Academy Superintendent Fatih Bogrek told the panel that school bus transportation for the Fayetteville schools is a possibility if there is a demand for it.

In addition to the Springdale campus and the soon-to-open campuses in Rogers, the LISA Academy system has three charter schools in Little Rock and three in Sherwood. This school year, the system began the Arkansas Hybrid School, which is headquartered in Little Rock.