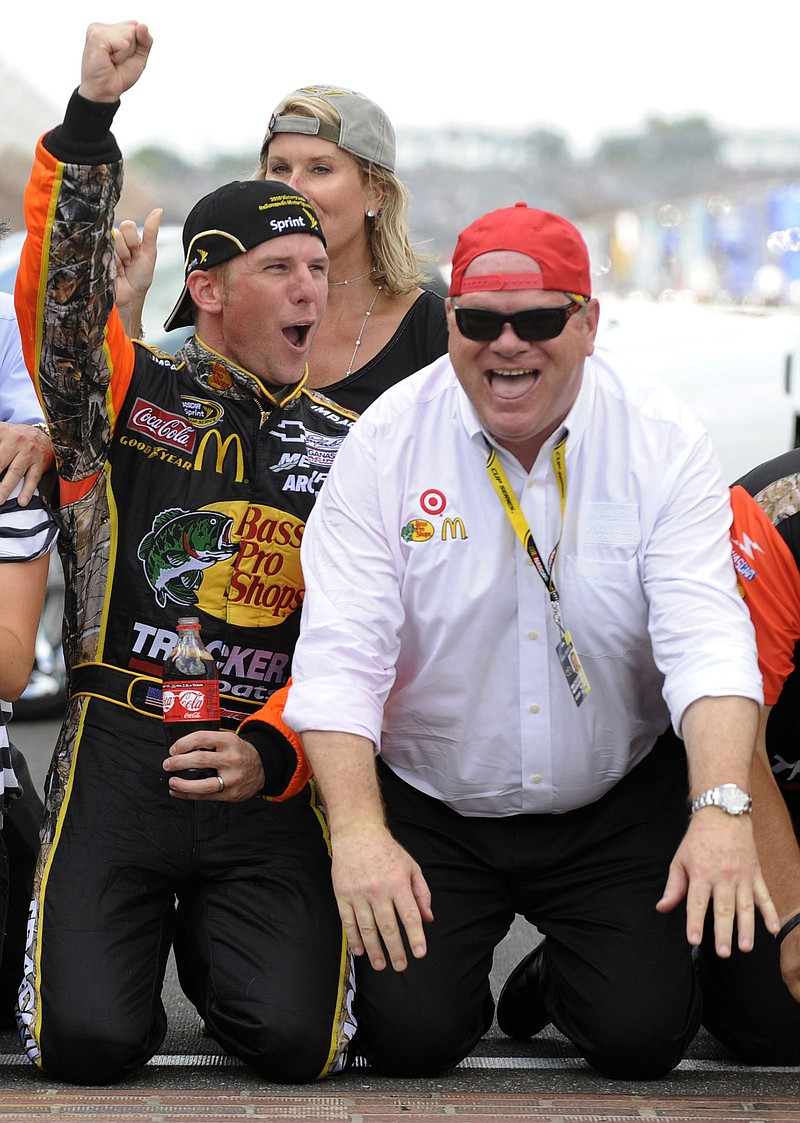 "Look, I'm fine with Larson and absolutely I am pulling for him," Ganassi said. "It would prove what everybody has said all along -- that he was going to be a champion someday."

Larson, a nine-race winner this season and the title favorite, of course will not be racing for Ganassi at Phoenix Raceway. He drives for Hendrick Motorsports now.

What an ironic ending it would be if Larson goes and gets that big trophy on Ganassi's final day in NASCAR. Ganassi brought Larson into the series from sprint cars and then developed him over nearly eight seasons, taking him right to the edge of superstardom.

The future of Ganassi's NASCAR operation depended on Larson, but Ganassi fired him last year over Larson's use of a racial slur. There wasn't really any other decision to make. Ganassi could keep Larson or he could keep the sponsors that keep the lights on at the shop. Larson got a pink slip.

A year and half later, Ganassi will leave Phoenix with NASCAR in the rearview mirror. He sold his NASCAR operation to Trackhouse Racing. All of it belongs to Justin Marks and Pitbull as soon as the race is over.

Ganassi didn't sell because he lost Larson. It was a free agent year, anyway, and there was no guarantee Larson wouldn't move to Hendrick Motorsports. But it didn't help.

The sponsorship market is tight and new business hard to find. Pitbull and Michael Jordan are now NASCAR team owners and Chip Ganassi Racing, in its 20th anniversary year, was no better than middle class.

Marks couldn't get the NASCAR charters he needed for his own upstart team, so he bought an entire race team after cold-calling Ganassi. It's been a fast-moving four months: CGR had a farewell luncheon at the shop Tuesday. Some employees will be hired by Trackhouse; some are out of luck.

"You could be melancholy if you want to be, but I look at it and see a lot of successes over the years," Ganassi told The Associated Press this week.

"And we did it over 20 years, so you know a lot of these people well and you see them grow and their families grow and their kids grow, and I'm very happy with what we did and what my legacy will be in NASCAR."

The record book shows 24 Cup Series victories and 21 Xfinity Series wins, 53 poles and two All-Star race victories. Only having 24 wins and no championships suggests a team that couldn't get over the hump to become one of NASCAR's powerhouse organizations, but it was not a dry well.

The highlight was 11 years ago when Jamie McMurray returned to Ganassi and won the season-opening Daytona 500. McMurray won the Brickyard 400 that season, too, and coupled with Dario Franchitti's victory in the Indianapolis 500 and a sports car win at Rolex 24 at Daytona to open the 2011 season, Ganassi became the only team owner to claim all those crown jewels in a 12-month period.

"I think when you stack up wins per dollar, I think we look really good," Ganassi said.

The 63-year-old Ganassi is not a NASCAR lifer. A former racer who remains true to his Pittsburgh roots, Ganassi's career was in IndyCar until he bought into Felix Sabates' existing team ahead of the 2001 season. The new Chip Ganassi Racing program debuted on the day Dale Earnhardt died. Ganassi driver Sterling Marlin was involved in Earnhardt's fatal crash.

The year went on and Marlin needed only 23 races to appease a boss known for his "I like winners" slogan. A second victory six weeks later set up a possible run for the 2002 championship

Marlin opened Ganassi's second season with two wins in the first five races. He topped the standings for 25 consecutive weeks, but his title hopes ended when he broke a bone in his neck in a crash at Kansas with seven races remaining.

It was the closest Ganassi came in 20 years to winning a Cup championship.

Ganassi gambled when he brought Juan Pablo Montoya back from Formula One to race in NASCAR, and again when he signed Dario Franchitti away from Michael Andretti. Not to drive one of Ganassi's all-star Indy cars, though: Ganassi signed Franchitti to join Montoya in stock cars.

Franchitti's 2008 rookie season lasted only 10 races before he was injured in a crash at Talladega. Ganassi was already feeling the effects of the upcoming financial crisis late that 2008 spring and sponsorship was tight; Franchitti's team was closed.

There is no single reason Ganassi is leaving NASCAR and he is certainly not leaving racing. Alex Palou's championship in September in his first year of IndyCar was Ganassi's 14th in American open wheel racing. Six of the sport's legends have won titles for Ganassi.

Alex Zanardi, Montoya, Franchitti and Scott Dixon are all Ganassi champions, and this years marks the 25th anniversary of the Jimmy Vasser title that launched a Ganassi dynasty. Ganassi will have four IndyCar teams next season, and he told AP he will run a fifth in the Indianapolis 500 for Jimmie Johnson.

WHEN 2 p.m. Central on Sunday 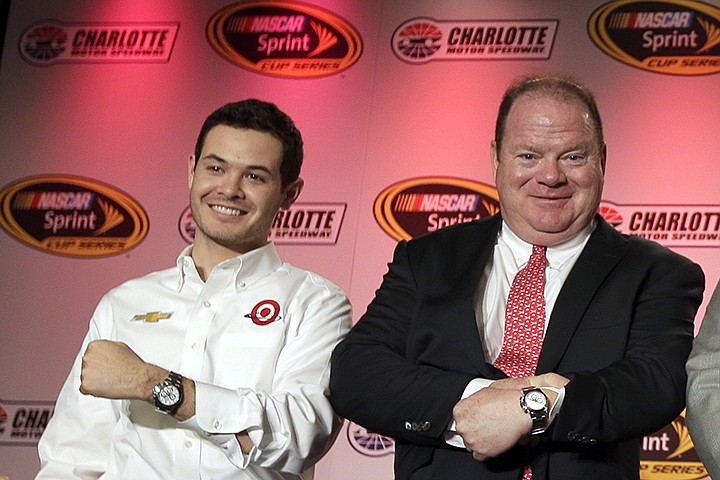 FILE - NASCAR driver Kyle Larson, left, and team owner Chip Ganassi show their Rolex watches for winning the Rolex 24 auto race during the NASCAR Charlotte Motor Speedway media tour in Charlotte, N.C., Thursday, Jan. 29, 2015. Chip Ganassi will &#x201c;absolutely, 100%&#x201d; be rooting for Kyle Larson to win the NASCAR championship in Sunday's, Nov. 7, 2021, finale. What an ironic ending that would be, though, for Larson to win his first championship on Ganassi's final day in NASCAR. Ganassi plucked Larson out of sprint car racing, developed him over nearly eight seasons and then, in Larson's free agency year, was forced to fire him in early 2020 over Larson's use of a racial slur. (AP Photo/Chuck Burton, File) 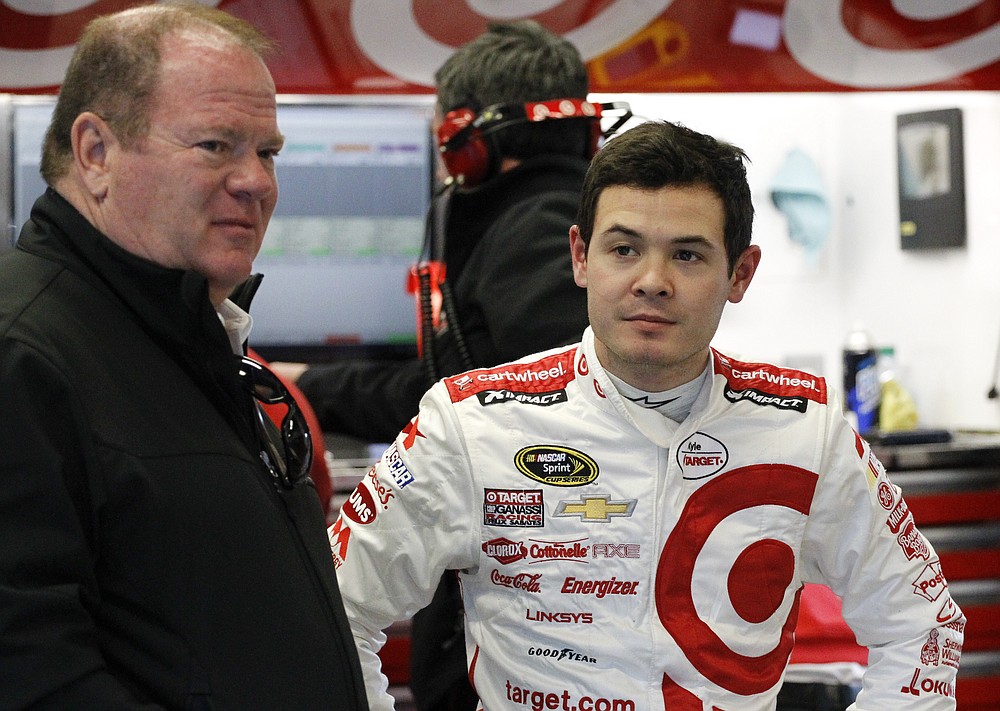 FILE - Car owner Chip Ganassi, left, and driver Kyle Larson talk in their garage during a practice session for a NASCAR Sprint Cup Series auto race at Daytona International Speedway in Daytona Beach, Fla., on Feb. 13, 2015. Chip Ganassi will close his 20-year run in NASCAR in Sunday&#x2019;s, Nov. 7, 2021, season finale. Ganassi will attend his final race and watch Kyle Larson compete for the Cup title driving for Hendrick Motorsports. It was Ganassi who discovered Larson but he had to fire him last year when Larson used a racial slur. It was just one of the many bad breaks Ganassi suffered since entering NASCAR in 2001. (AP Photo/Terry Renna, File) 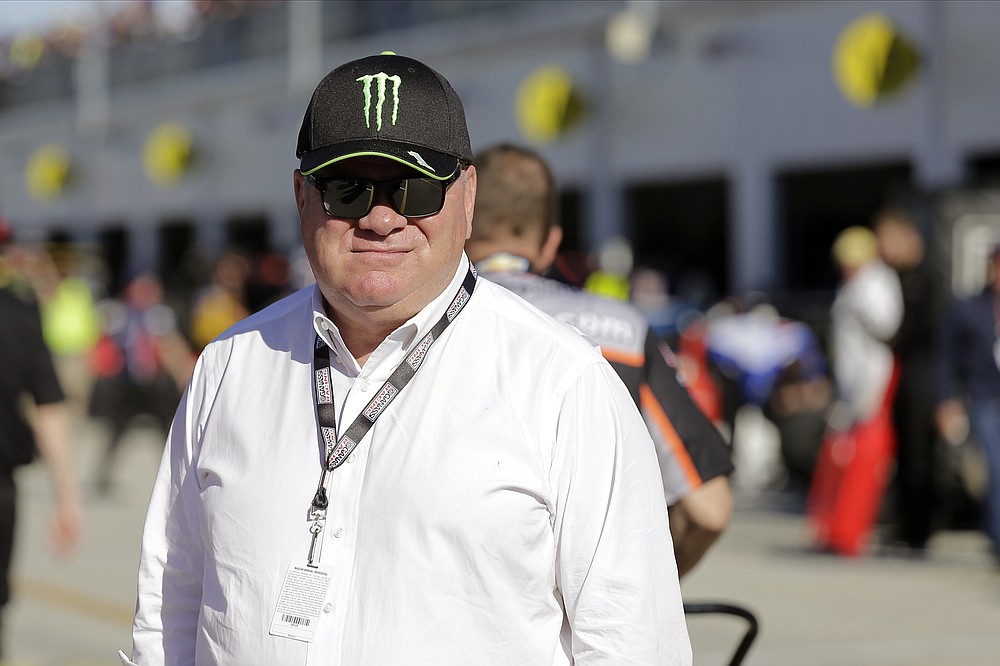