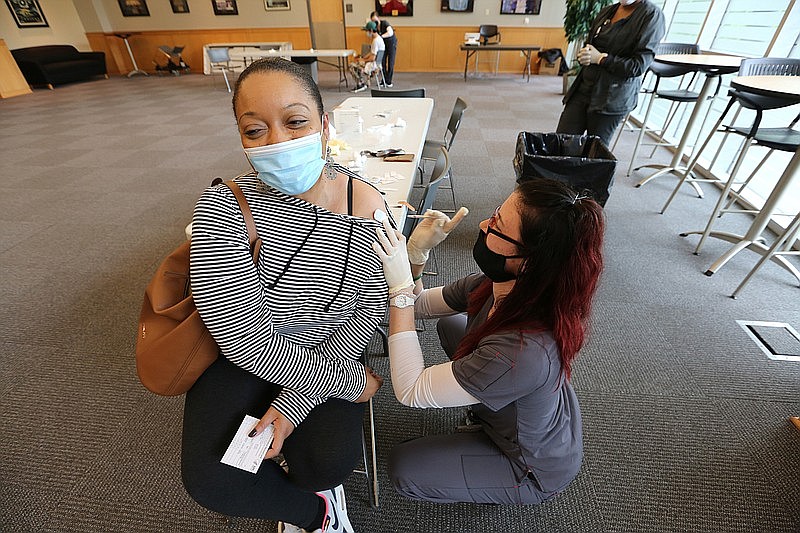 Mia Hampton gets her first dose of the Pfizer vaccine from Jami De La Cruz, a senior nursing student at UALR, during UALR’s vaccine clinic put on by Don’s Pharmacy on Wednesday, April 28, 2021, at the Jack Stephens Center in Little Rock.

Joanna Seibert has been "sowing seeds" for a potential covid-19 vaccination clinic at her church, St. Mark's Episcopal in west Little Rock, she said.

It hasn't taken root so far.

Seibert and her husband, both retired physicians, coordinate the church's weekly food pantry from 8:30 to 10:30 a.m. every Thursday. They adapted it from a walk-in to a drive-thru pantry in March 2020 at the onset of the coronavirus pandemic.

Over the past several weeks, pantry volunteers have been asking food pantry clients if they have been vaccinated. They have offered information about the vaccine to people who have not received it, but very few people have been able to say they can make it to a potential clinic at the church in July, Seibert said.

Some say they have already been fully vaccinated, and very few do not want the shot, she said, while a third group is the target audience but also the most difficult to pin down.

"There are people who are interested but they seem to have difficulty making a set plan, like 'yes, I'll be back that day,'" she said. "Some of them don't know where they're going to be one month later."

The Arkansas Department of Health is working with food pantries and social services agencies to reach unvaccinated Arkansans who would not normally seek out health care providers, state Epidemiologist Jennifer Dillaha said.

"People who are homeless or have food insecurity or have low incomes won't access health care because they don't have the resources to do it, so if we're expecting them to go to a health provider to get vaccinated, that might not be a realistic expectation," Dillaha said.

The department is working with various agencies such as CareLink, AARP and the Arkansas Association of Area Agencies on Aging to meet people where they are, which is especially important for people who cannot afford to miss a day of work, Dillaha said.

"They don't have to pay for [the vaccination], but if they have to take time off work and lose wages, it is a cost, so we want to find ways to take the vaccine to the work site or some locations they would be going anyway," she said.

On Saturday, 7,749 shots were given statewide, 2,161 fewer than Friday and 111 fewer than Thursday, according to Health Department data.

The state has not administered more than 10,000 vaccinations in one day since May 20 and 21, a rare spike throughout the month, since average daily vaccinations have been declining. On Friday, the rolling seven-day average dropped below 8,000 for the first time since Feb. 23.

Seibert has asked the Health Department for Pfizer vaccines, which are authorized for distribution to children as young as 12 years old, to distribute at the potential church clinic.

"In this kind of situation, you would think the Johnson & Johnson [vaccine] would be the right choice because it's one shot, but we really wanted an opportunity to vaccinate children, and the families that come to our food pantry have a ton of children," Seibert said. "Some have six to 10 children in their household, often because they're blended households."

The clinic would be open to all members of the St. Mark's congregation, not just food pantry clients, but it might not happen if there is not enough interest by the end of June, Seibert said.

If the clinic happens, it will likely be July 8 with a second one on July 29, she said.

The Health Department reported no new covid-19 deaths Saturday for the second time this month. The total number of deaths remained at 5,830.

These decreases mean the state is "trending in the right direction," Gov. Asa Hutchinson said in his daily Twitter statement.

"Arkansans know what to do to protect themselves from this virus, and our case reports continue to reflect that," he said.

The Health Department records a seven-day rolling average of positive polymerase chain reaction (PCR) and antigen tests for covid-19. The average was 3.8% on May 1, but it had been 5.2% for three days in a row as of Saturday, according to data provided by the department.