Travel and bravura writing in 'The Best of Outside' 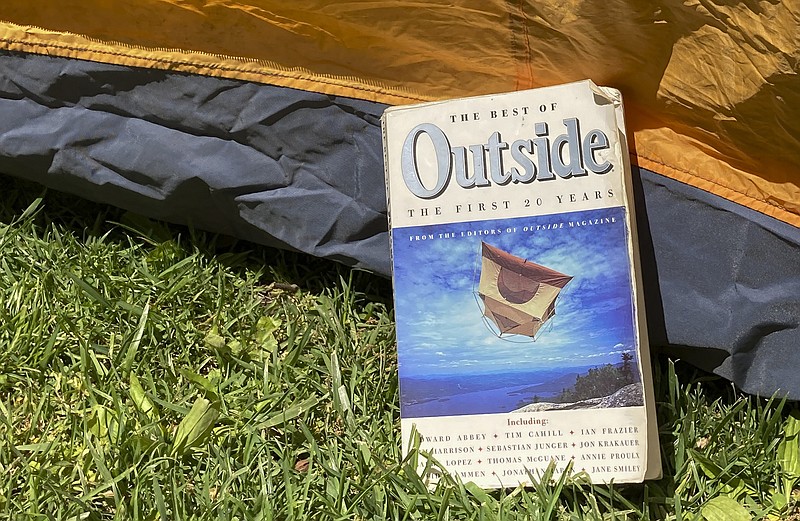 This is John Briley’s battered copy of “The Best of Outside: The First 20 Years.” (The Washington Post/John Briley)

In a way, I envy the single-minded vacationer, one who is all-in on cycling, skiing, golfing, wine tours, fly-fishing, whatever. They are the leisure-travel equivalent of people who choose a career path at age 7 and never waver.

I am the near opposite, an adventure generalist guided only by the broad theme of outdoor play in wild places. So I seize up every time I look at my calendar (and bank balance), wondering how I'll divvy up each year's meager allotment of travel days.

But just as there's a book out there for every imaginable specialist, there's also one for me — "The Best of Outside: The First 20 Years." Its 30 articles from the eponymous magazine's 1977-1997 heyday showcase some of the best adventure writers, literary journalists and essayists of the 20th century: Jim Harrison, Edward Abbey, Jane Smiley, James Salter, Annie Proulx, Bob Shacochis, David Quammen, Kate Wheeler and more.

The stories, which include the original articles that became the bestselling nonfiction books "Into Thin Air" and "The Perfect Storm," are about so much more than travel. As editor Mark Bryant writes in the introduction, "Outside's" writers "aim high, creating pieces to not merely entertain on the subject at hand ... but to explore our behavior, our values, our judgments, our place in the natural order of things."

These are not only tales of running an Alaskan river, frollicking around Belize and what's next for a six-time Ironman champion, but also of Spain's top female bullfighter, the Miss Rodeo America contest and Englishmen who put live ferrets in their pants. In every case, these writers — most of whom came from or went on to laudable careers — emphatically answer the question: What's the real story here?

In "Torched," Michael Paterniti documents a summer wildfire-fighting campaign in Idaho, penning a lead that makes me wonder why I even bother: "Out of Louisiana frog swamp and Kentucky canebreak, Kansas cheatgrass and Dakota badland, they appear on the bright cusp of summer, marked like exotic birds in their Forest Service pickle suits or pressed fire shirts. Men and women, flying west, flushed out by lightning." And it gets better. Over the next few months, "these men and women — the ones known as helitacks and hotshots and the elite firefighting crews called smoke jumpers — will hump thousands of backcountry miles, dig fire lines until their backs are wrecked, and push through so many days of fatigue that the snake-hiss and flicker of flame will seem like a fever dream."

Not my notion of fun, and yet I've read that piece probably 15 times, savoring every sentence and hoping, as I have with so many in this collection, that some of the author's brilliance would magically seep into my fingertips.

Likewise with "Today Many Problems," in which Laurence Shames recounts a chimp-spotting safari gone almost-but-not-quite terribly wrong in Tanzania. Within hours of Shames's arrival on the shores of Lake Tanganyika, his guide ditches him for a woman who arrived concurrently, absconding with the group's only boat, only rifle and most of the food, and leaving the journalist in the care of a one-eyed and somewhat hapless assistant named Mkumbwe. Shames describes worrisome growls coming from "grasses ... sunbleached to the color of lions" and fearing he might die of thirst after trusting Mkumbwe's empty promises of flowing streams along one of their sweaty, slippery, bramble-infested hikes.

When they find the chimps "arrayed around a small clearing as if in Aunt Margaret's living room after a holiday meal," Shames arrives at the realization that "chimps are a lot nicer to each other than we are. Would two chimps with the hots for each other go off with the rifle, the fishing gear, and the food, leaving the odd chimp out to stay behind and die? ... For that matter, if chimps could write, would they be so snide?"

Some of the pieces span decades. In his essay, "The Skiing Life," James Salter whisks me from his first runs as a novice in the Alps to skiing the famed Hahnenkamm downhill course with the Austrian racing legend Toni Sailer, on to Grenoble and, finally, to Aspen, where he'd moved in the late 1960s.

Salter, an accomplished novelist who died in 2015, sums up the skiing side of his time in Aspen thusly: "There are days, months, even years when you feel invincible, dropping down the back of Bell, Corkscrew, Moment of Truth as if slipping down the stairs, edges biting, bumps disappearing in your knees. The memory of it all will stay forever. You hate to have it end."

He also writes movingly of a woman named Meta who skied every day, regardless of weather or conditions. "It was kind of a pact. One didn't know the terms but they could be guessed at," because her father, a famed racer, had died in an avalanche. She was faithful to the pact to her final day, when she met the same fate while skiing out of bounds.

In another reflection, "Moments of Doubt," David Roberts examines whether serious rock climbing is worth the risk. Roberts is the real deal: a Harvard-educated longtime expeditionary mountaineer who has written profusely on his own and others' adventures and is now a climate and energy writer at Vox. He begins this 1980 essay by recounting in stomach-churning detail his friend Gabe's death while climbing the First Flatiron above Boulder, Colo. After several troubling developments — a snagged rope, a failed effort to free it — Gabe attempts a tricky move while out of sight from the author.

"Next, there was a soft but unmistakable sound, and my brain knew it without ever having heard it before. It was the sound of cloth rubbing against rock. Then Gabe's cry, a single blurt of knowledge: 'Dave!'"

Roberts edges back into climbing, witnesses other deaths and spends three unimaginable days with a deceased climbing partner's parents, in the presence of "the hope-destroying grief of parents ... a grief that would, I sensed, diminish little over the years. It awed and frightened me, and disclosed to me an awareness of my own guilt."

Other selections in the book delve into human nature more wryly. Among the best of these is Craig Vetter's "Voyage of the Smithereens," a cautionary tale about an ill-fated sailboat charter he and his wife undertook with an alleged friend, Jack.

It all starts innocently enough. "I pictured the big equatorial sun in the big Caribbean sky, felt the big, steady push of the trades riding into the sails of our 47-foot sloop until the beak of the thing was down in the swell like a plow in a furrow, bucking warm spray into my nut-brown face where I stood at the wheel like every Spanish explorer, every French pirate, every English merchantman who ever slid a ship on these perfect turquoise waters ... " (yes, that sentence rolls on, for another 44 words!).

But when Jack assigns sleeping quarters, Vetter observes that nowhere in the maritime literary compendium is it revealed that, "to an experienced sailor, where you end up sleeping on a boat is more important than a working compass, and that there has probably been more grisly death at sea over the allotment of beds than from storms or scurvy or the division of plunder."

In "Peruvian Gothic," Kate Wheeler slashes deep into the jungle in search of a man who decades prior had vanished into the woods with his wife and children and, after his wife tired of the frontier struggle and retreated to civilization, kept one daughter and went even further, eventually starting another family with his daughter-wife and becoming notorious across the land.

Wheeler captures the Amazon as it feels when you're actually trying to traverse it: "Up close, the forest had little romance. Rain, mud, slopes, vines, cliffs, sinkholes, swamps, thorns, ants, mosquitoes, and biting flies. We crossed white-water canyons on bridges made of rotten logs, pulled ourselves up cliffs on pencil-thin roots, and fought our way through thickets of bamboo."

The book is laced with the core ingredients of travel, and life: adrenaline, humor, suspense, sorrow, kindness. As a bonus, the many hours I've spent with "The Best of Outside" have made me a better writer, and I'll often open it for inspiration when I'm struggling with a draft that lacks energy, focus or flow.

But mostly, it's fun, and full of timeless gems, like Jim Harrison's 1987 guide to road-tripping, "Going Places," which celebrates the "benefits to be gotten from aimlessness." Harrison, a gifted poet, novelist and screenwriter who died in 2016, notes, "If you were really smart you probably wouldn't be doing this. This is not the time to examine your shortcomings, which will certainly surface when you get home."