OPINION | TIM CULPAN: The Olympics are not a democracy 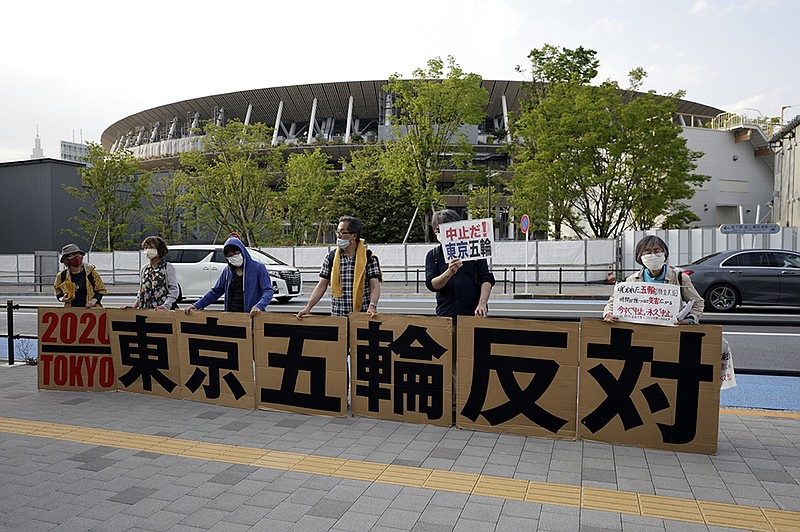 Protesters hold banners near the National Stadium, the main stadium for the Tokyo 2020 Olympic Games, May 9 in Tokyo. (Bloomberg/Kiyoshi Ota)

Everybody loves the Olympic Games. Except when you're the host nation in the middle of a pandemic.

Unfortunately for Japan's government, it's not up to them to decide whether the Games of the 32nd Olympiad get canceled. While Tokyo could theoretically pull the plug right now--two months from the rescheduled start date--the city is contractually obliged to go ahead.

With covid-19 cases surging and parts of the nation (including Tokyo) under a state of emergency, and vaccine rates in the single digits, it's unsurprising that 59 percent of Japanese say the event should be canceled.

Those voices against proceeding, while vociferous, are largely confined to Japan. Rakuten Group Inc. Chief Executive Officer Hiroshi Mikitani and SoftBank Group Corp. founder Masayoshi Son are among those vocalizing their opposition.

Meanwhile, Seiko Hashimoto, one of the nation's most decorated Olympians and now head of the Tokyo 2020 Organizing Committee, noted that although the number of people coming for the event has been cut from 180,000 to 80,000, "There are not a few people who feel uneasy about the fact the games are going to be held where a lot of people are coming from abroad."

But it's not their choice. As Prime Minister Yoshihide Suga told members of a parliamentary committee earlier this month, even though he has "never put the Olympics first," it's the International Olympics Committee that has the final say. It states as much in the IOC's contract with the city of Tokyo.

So the most likely way for the games to be halted would be through a negotiated settlement involving Japan, Tokyo and the IOC.

It's easy to explain the insistence to push forward as being driven by sponsorship money. That's certainly a part of it, but not the entirety.

In fact, the committee is composed of 103 people (plus 45 honorary members, two honor members and one honorary president) who are "not their country's delegate within the IOC." This isn't like the United Nations, where each state gets a seat in the General Assembly. If democracy were to be defined as one vote, one nation, then the IOC is certainly not democratic. Some nations have three members on the committee--China, the U.S., Switzerland, among them--others one or two, and some none at all (Nigeria, Malaysia).

There's a lot to be said for this organizational structure. Rather than being run by a cohort of career diplomats, the membership is weighted toward sports officials, with more than a third of them former Olympians. With the Olympics meant to transcend politics, it may be a good thing that national and international geopolitical issues are separated from the core decision-making of the IOC.

Instead, these 103 guardians of the Olympic Movement are charged with promoting and strengthening the integrity of sport. They also hold the power to grant recognition to the two other components of the Olympics: National Olympic Committees, of which there are 206, and International Federations, which represent 46 different sports at this year's games.

The IOC has canceled five Games before, three Summer and two Winter, due to war in 1916, 1940 and 1944. It was obvious at the time that nations who were committed on killing each others' citizens wouldn't be able to gather together for two weeks of friendly sporting competition.

Ironically, it was Tokyo that canceled its own Games in 1940, announcing in 1938 that it would relinquish it until such time as peace returned to the region. Helsinki was given the gig before it became clear that any running of the event would be impossible.

Instead, what's likely pushing these Games toward their July 23 start isn't necessarily some adamant belief in them, but bureaucratic inertia and an executive body determined to get the job done. One of the most vocal proponents is IOC Vice President John Coates, who said that Japan's state of emergency alone wouldn't be enough to halt it.

"It's now clearer than ever that these Games will be safe for the people participating and safe for the people of Japan," Coates said May 21, according to Quartz. Four-time medalist and World Athletics president Sebastian Coe told CNN that cancellation of the Games would "discard a generation of athletes who have spent over half their young lives in pursuit of this one moment."

Muddying the waters is a decision by the U.S. last week to raise its travel advisory, warning that Americans should avoid traveling to Japan because of the outbreak there. A Japanese Cabinet official later told reporters that Washington had advised Tokyo the decision wasn't connected to the Olympics, but based on the projected infection rate.

The U.S. has no power to halt the Games. Neither does any other country. Even if they all gathered together and voted on it (an unlikely scenario), such a ballot would hold no legal weight. The most Washington could do would be to instruct the U.S. Olympic Committee to pull out, effectively boycotting the event. That would be a drastic and risky move against a key Asian ally amid growing tensions in the region and just six months from rival China hosting the next Winter Games.

In fact, since National Olympic Committees also draw on the Games to gather sponsorship money and underpin their legitimacy, it's hard to imagine any of them advocating for a cancellation (although North Korea has said it will boycott).

Likewise, the various International Federations which rely on the world's biggest event to put their sport in the global spotlight and help promote further participation and membership won't be keen to sign any petitions.

The IOC has already said that a further delay is impossible. And cutting back the number of sports will cause all sorts of political drama; some nations are stronger in some events than others. Which makes the Olympics a case of all or nothing. Right now, the momentum favors going all in on these pandemic games.