Rogers joins Fayetteville in offering vaccine pay, and Benton County may, too 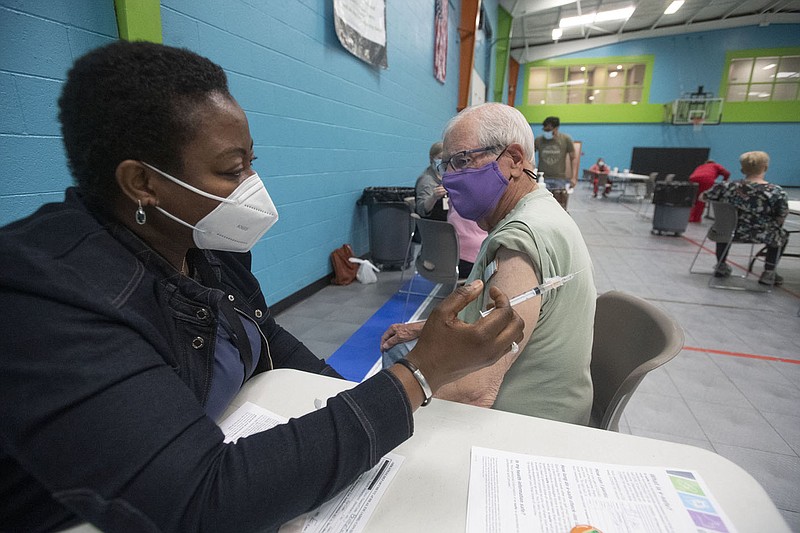 Benton County Judge Barry Moehring wants to pay a $100 incentive to county employees who are or who get vaccinated against covid-19.

Fayetteville Mayor Lioneld Jordan announced in April the city will pay workers a $50 incentive if they are vaccinated before June 11. Rogers began offering a $125 payment to its employees Wednesday, so long as they are vaccinated no later than July 31.

The state employee benefit was set at $200 to ensure every employee gets at least $100 after all withholdings are deducted, according to the governor's announcement.

Arkansas still has about 2,000 active cases of the disease, according to Arkansas Department of Health. An estimated 5,827 died from covid-19 between the first cases found early last year and Wednesday, those figures show. More than 340,000 Arkansans -- 10% of the state's population -- have been diagnosed with covid-19 since the outbreak began.

Half of adult Americans are fully immunized, President Joe Biden announced Tuesday. He set a goal of 70% by July 4. As of Thursday, covid-19 had caused 588,421 deaths in the United States.

Washington County has no employee vaccine incentive proposal pending, said county attorney Brian Lester. Neither Sebastian County nor Fort Smith offers such payments either, spokesmen for those entities said. In Sebastian County and in Fort Smith, leaders are coordinating with local efforts to encourage as many residents as possible to get vaccinated rather than offer direct incentives to employees, spokesmen said.

The Benton County judge's proposal would cost more than $100 per employee because those employees should receive a net benefit of $100 after taxes and other withholdings, Moehring said in an interview. The $100 beneficiaries would include full-time and part-time employees.

About 700 employees would qualify to receive the proposed benefit at a cost not expected to exceed $100,000, Moehring said.

Money for the payments would come from the federal American Rescue Plan, which is sending more than $54 million to the county, according to the proposal. The judge proposed the payments in a May 21 letter to county Quorum Court members.

Wyman Morgan, Springdale's director of administration and finance, said he has heard of no similar proposal for Springdale and would have to ask the city attorney for counsel if the idea was raised. Counties have health departments giving them a clear legal avenue for health-related spending, Morgan said. Springdale does not.

Springdale spent federal taxpayer money on face masks and other protective measures, but the money was earmarked for those supplies, he said.

Fayetteville researched whether such payments were allowed and found no problems, said Paul Becker, city finance director. The city will pay the benefit out of the regular city taxpayer funds, he said. The payments are health related, both as a way to protect employees and the people they interact with, he said.

The city expects the vaccines' protection will be cost-effective in protecting employees from the virus, reducing the risk of serious medical expenses, he said. The city of Fayetteville employs 778 people, city figures show.

"We want to get as many people vaccinated as we can before school starts," he said.

The city wants to reduce the risk of either employees or the people they interact with contributing to a returning surge of the disease before students head back to classes this fall, he said.

Rogers will pay the incentive to full-time, part-time and temporary employees, the mayor said. The city has a self-insured health benefit plan and the money for the incentives will come out of payments into that plan, he said.

The city has 557 employees, including 24 part-time employees, Hines said.

"He's instituted this step in order to increase the percentage of state employees who ultimately will get vaccinated and to encourage other organizations to do the same," the judge said in his letter to Quorum Court members.

County employees work side-by-side with state employees in state revenue offices, the prosecutor's office, circuit courts and elsewhere, Moehring said. Workers in the same offices should have the same incentives, he said in an interview.

"We're currently estimating that approximately 50% of county employees have been vaccinated. The goal would be to increase this level to at least 70%," Moehring's letter says.

"We're still working on the details, but we're planning on bringing the proposal to the June Finance Committee meeting," Moehring's letter states.

"The estimated cost would not exceed $100,000 and would be an expense from the dollars we've received from the American Rescue Plan. For those who are willing to be vaccinated, this is simply an incentive to do so. This does not at all change the right of an employee to choose to not be vaccinated." 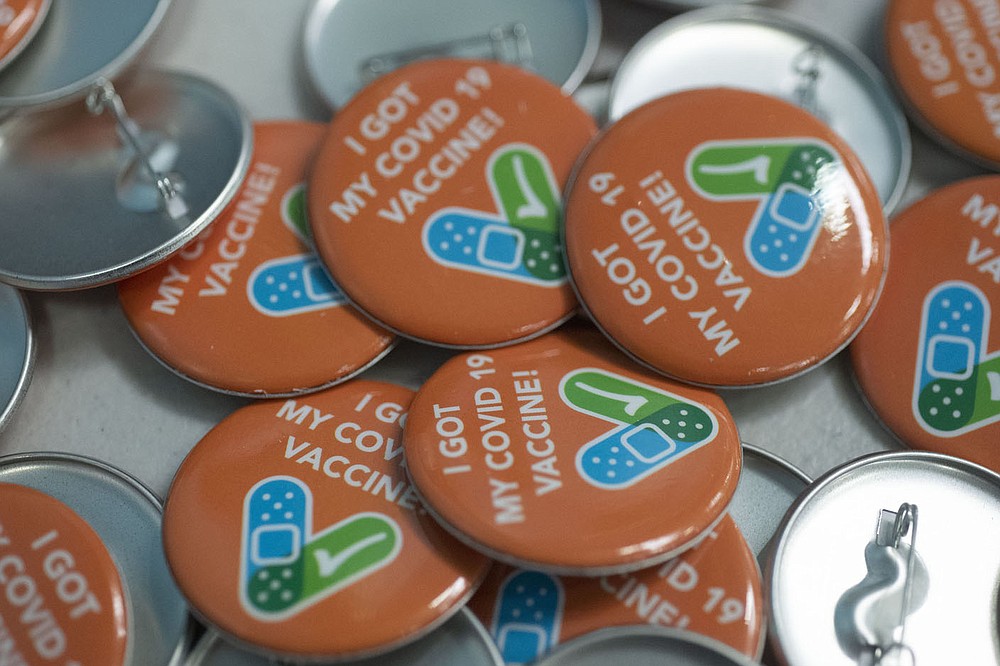 Buttons for people who receive the covid-19 vaccine on a table Wednesday May 26, 2021 at the Rogers Activity Center.Visit nwaonline.com/210530Daily/ and nwadg.com/photo. (NWA Democrat-Gazette/J.T. Wampler)
More News

Total covid-19 cases as of Friday: