OPINION | REX NELSON: From blue to red and back again

Political transformations are part of the landscape in Texas, and Arkansas may not be far behind by Rex Nelson | May 30, 2021 at 8:51 a.m. 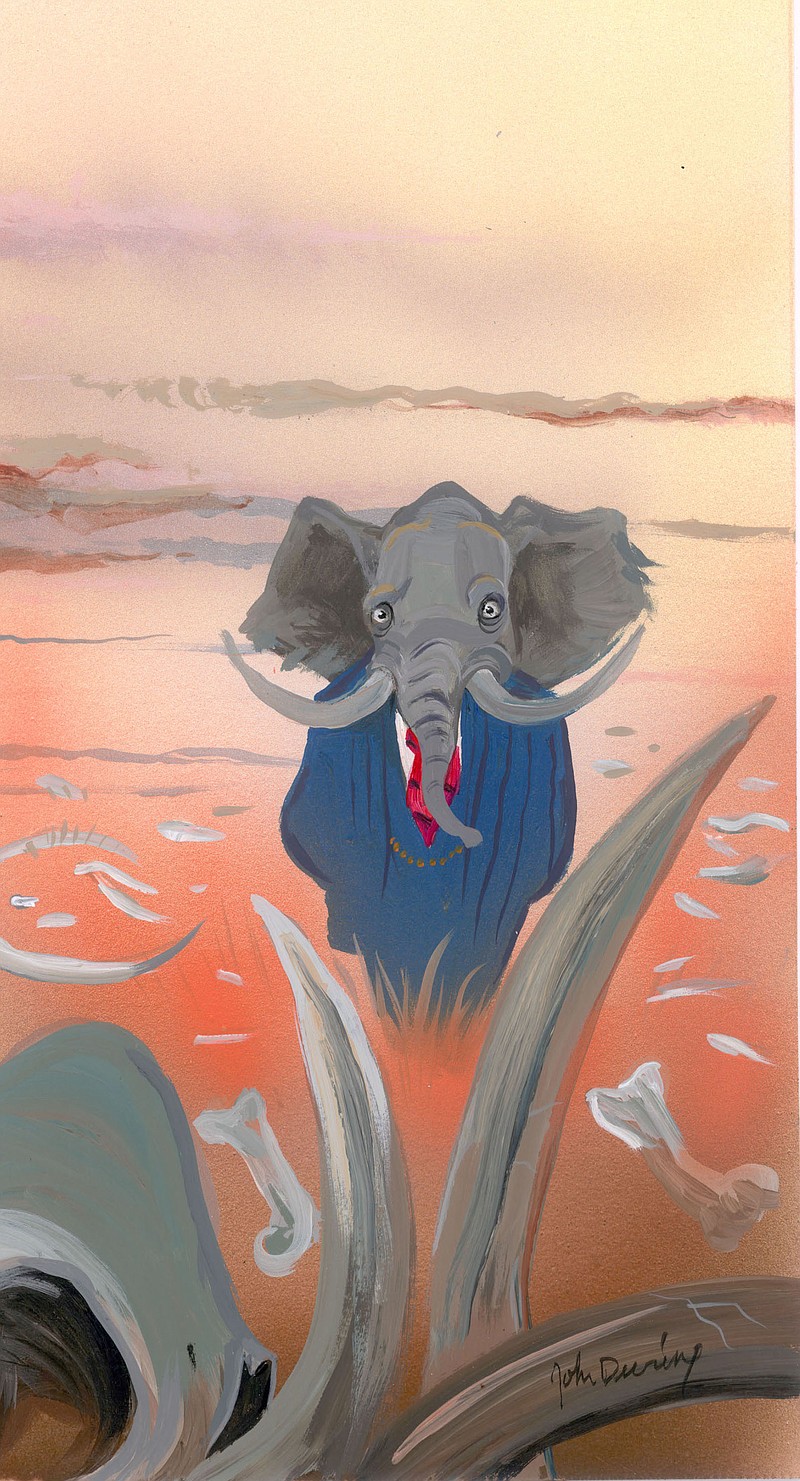 During Bill Clinton's presidential campaigns of 1992 and 1996, the Arkansas Democrat-Gazette spared no expense. The newspaper had reporters on the road with Clinton constantly and also published a number of special projects, such as one known as the Battleground States series.

During both campaigns, 10 key states were picked, and reporters went to those states to take the political pulse.

As the newspaper's political editor, I was responsible for assigning and editing stories in 1992 and 1996. I also chose a couple of states to visit myself each election cycle.

In 1996, one of my trips was to Texas. The Democrat-Gazette's executive editor at the time, Griffin Smith, had helped launch Texas Monthly magazine years earlier and knew the state and its political players well.

Smith insisted that I stay in downtown Austin at the Driskill, the city's oldest hotel. It had been built by Col. Jesse Driskill, a cattleman who was determined to construct the finest hotel south of St. Louis.

The Driskell, which has been on the National Register of Historic Places since 1969, has a rich political history. The Romanesque building was completed in 1886, and Gov. Sul Ross held his inaugural ball there on Jan. 1, 1887. Every Texas

governor who followed held inaugural balls at the Driskill.

Lyndon Johnson had the first date with his future wife, Claudia "Lady Bird" Taylor, in the Driskill dining room in 1934. It would serve as campaign headquarters during his 1948 U.S. Senate race and was the place where he watched the results of the 1964 presidential election trickle in. LBJ watched television that night in the Driskill's presidential suite, then declared victory in the ballroom.

Smith asked his old friend Paul Burka, the state's most respected political writer, to have breakfast with me. We consumed chicken-fried steaks and eggs in true Texas fashion, and I listened to Burka's reflections on the political scene.

While my wife, a native of south Texas who had accompanied me on the trip, hung out with my aunt who lived in Austin, I drove to Waco one day for the annual banquet of the McLennan County Republican Party. Texas Gov. George W. Bush's press secretary had told me that it would be the best place to catch the governor for a few minutes to discuss Texas politics.

Bush had defeated incumbent Democratic Gov. Ann Richards with 53 percent of the vote in November 1994.

While quotes from Burka and Bush proved useful, I ended up basing my story on the political transformation of Williamson County, just north of Austin.

Like Arkansas, Texas had been controlled by the Democratic Party from the end of Reconstruction through most of the 20th century. As growth exploded in Williamson County--it went from 37,305 residents in the 1970 census to 139,551 residents in the 1990 census (there are now 600,000 residents)--political allegiances switched to the Republican Party.

In 1976, voters there had supported Democrat Jimmy Carter for president with 55 percent of the vote, three percentage points higher than Travis County (which includes Austin). In 1980, though, the county gave Republican Ronald Reagan 57 percent of the vote. Williamson County became increasingly Republican during the rest of the 1980s and early 1990s, with the GOP even winning offices at the county level.

I spent a day in charming Georgetown, hanging out in the 1911 courthouse and visiting with county officials. I sensed that what was happening in Williamson County was a microcosm of what was happening elsewhere in Texas--and what might one day happen in Arkansas. It just took a lot longer in the Natural State.

Going into the 2010 election cycle, five of the six Arkansas seats in Congress were held by Democrats. They held all seven statewide constitutional offices and had large majorities in the state Senate and state House of Representatives.

Now, the six congressional seats are held by Republicans. The GOP holds the seven statewide constitutional offices and has big majorities in both houses of the Legislature. And Republicans are winning county offices across Arkansas, just as was happening in Texas 25 years ago when I wrote my story on Williamson County.

These days, there's a new trend in Williamson County. Democrats are relevant again. Joe Biden edged Donald Trump in the county last November, 49 percent to 48 percent. Williamson County gave a majority of the vote in 2018 to Beto O'Rourke in his unsuccessful bid against Republican U.S. Sen. Ted Cruz.

The "blue wave" that the most optimistic Texas Democrats predicted failed to materialize in November, but the trends are clear. In the next several election cycles, Texas is positioned to again become a Democratic state.

As was the case in the previous swing of the political pendulum, change likely will take much longer in Arkansas. Still, Arkansas is becoming more urban by the day--the only three consistent growth areas are northwest Arkansas, the Little Rock metro area, and the Jonesboro-Paragould corridor. Two-thirds of the state's counties are now losing population.

As the state urbanizes, Democrats will see their fortunes improve, especially if the Arkansas GOP continues to be controlled by the far-right fringe that hijacked this year's legislative session.

To be clear, I don't expect a switch back to Democratic control to happen anytime soon. Remember, Arkansas was a couple of decades behind Texas in switching to the GOP. By the same token, given the demographic changes, I don't see Republicans enjoying the 130-year reign that Arkansas Democrats had following Reconstruction.

"The Texas Republican Party has lost its ability to speak to much of the contemporary electorate," Robert Draper wrote for Texas Monthly. "That the cultural and demographic changes in Texas would at some point catch up to the state's politics is an eventuality that the GOP's leaders have done everything in their power to delay.

"The party has energized its base through culture-war issues such as opposition to immigration, gun control, abortion rights, racial justice protests and covid-19 restrictions. At the same time, its leaders have diluted the opposition vote through gerrymandered districts, dreamed up ways to make it more difficult for traditionally Democratic voters to cast their ballots, and scared off Democratic aspirants who can't hope to match the deep pockets of rich conservative donors."

Draper notes that Republicans have stayed in power in Texas due to a stranglehold on "a proportionately shrinking demographic: non-Hispanic white voters. Yet even that grip has become tenuous, for two reasons. First, the state GOP has maximized its rural turnout--there are few if any voters left to get. Second, and more important, the party is now struggling in the suburbs."

According to Cook Political Report congressional analyst David Wasserman: "Even more than the robust growth in eligible Hispanic, Black and Asian American voters, the bigger driver of change in Texas is the migration of professional whites in the suburbs, particularly women. This shift was underway in the Obama era. Even when Mitt Romney won a healthy share of professional whites in 2012, the state House races in suburban areas were much closer."

Wasserman called Trump an "accelerant" who provided "rocket fuel for converting suburban Republicans to at least independents--which we saw in 2018 when professional whites turned out at much higher rates than noncollege whites."

Texas gained 1.8 million registered voters between 2016 and 2020; most of them were in urban or suburban counties. Texas' biggest cities are getting bigger and consistently support Democrats.

In Texas, Republicans might retain control longer if they could find a way to attract more suburban voters in places such as Williamson County.

In Arkansas, a rebirth of the Democratic Party could be forestalled indefinitely if Republicans would remember their Winthrop Rockefeller heritage in a state with a persistent streak of mountain populism.

Heath Mayo, a Republican management consultant who hails from east Texas, wrote in Texas Monthly: "Lately it seems the only trick in the Texas GOP playbook is to leverage Republican majorities in the Leg to pre-empt local ordinances passed by Democratic city councils that offend the party's conservative base. These fights don't serve statewide interests.

"If you live near Abilene, why should you care about Austin's sick-leave policy? Or whether Laredo bans plastic shopping bags? You shouldn't. And yet sometimes it seems that these sorts of issues are all that Republican legislators and the governor want to discuss. It's a blatant violation of our longtime belief in the importance of local control.

"It's never healthy for one party to maintain a lock on power. That's how parties grow corrupt and complacent; without the risk of losing power, they stick by old ideas and ideologies and ignore the fact that a changing world requires a re-examination of dated orthodoxy. That apathy has gripped our party in recent years. It would be nice if we had managed to change on our own, without the pressures of electoral politics. But that didn't happen. Instead, we're now engaged in a political fight for the state's future."

More than anything Democrats do, the future of politics in Texas and Arkansas will ride on the internal battles now roiling the GOP.

Jelani Cobb, a professor of journalism at Columbia University, wrote earlier this year in The New Yorker: "The most widely debated political question of the moment is: What is happening to the Republicans? One answer is that the party's predicament might fairly be called the revenge of 'the kooks.' In just four years, the GOP, a powerful 167-year-old institution, has become the party of Donald Trump. He began his 2016 campaign by issuing racist and misogynistic salvos, and during his presidency he gave cover to white supremacists, reactionary militia groups and QAnon followers.

"Trump's seizure of the party's leadership seemed a stunning achievement at first, but with time it seems more reasonable to ponder how he could possibly have failed. There were many pre-existing conditions, and Trump took advantage of them. The combination of a base stoked by a sensationalist right-wing media and the emergence of kook-adjacent figures in the so-called Gingrich Revolution of 1994, and the Tea Party, have redefined the party's temper and its ideological boundaries."

Cobb says the most telling development came last August when the Republican National Convention convened without presenting a new platform. That's the GOP as it exists today, a party that has lost the White House, the U.S. Senate and the U.S. House in recent years and yet doesn't seem to have the will to plot a new course.

"The convention was centered almost solely on Trump," Cobb writes. "The events, all of which took place at the White House, validated an increasing suspicion that Trump himself was the Republican platform. Practically speaking, the refusal to articulate concrete positions spared the party the embarrassment of watching the president contradict them."