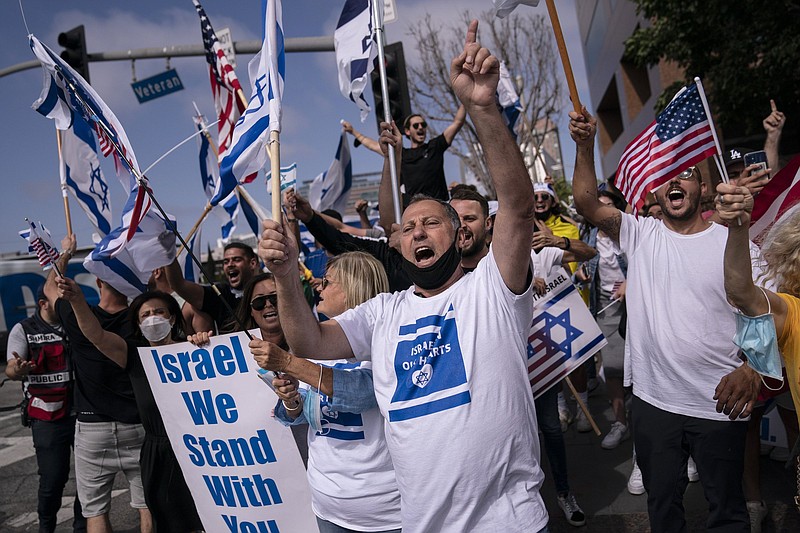 Pro-Israel supporters chant slogans during a rally in support of Israel outside the Federal Building in Los Angeles on May 12. A larger debate is playing out nationwide among many U.S. Jews who are divided over how to respond to the violence and over the disputed boundaries for acceptable criticism of Israeli policies. (AP/Jae C. Hong)

As fighting between Israel and Gaza's militant Hamas rulers raged before last week's cease-fire, U.S. rabbinical student Max Buchdahl wanted to be considerate of those in his community who are emotionally connected to Israel -- but he also wanted to support Palestinians.

Buchdahl, 25, joined dozens of rabbinical and cantorial students who signed a letter expressing solidarity with Palestinians and appealing to U.S. Jews to demand change from Israel, which it accused of abuses.

Push back came swiftly from Rabbi Bradley Shavit Artson, the dean of Ziegler School of Rabbinic Studies at American Jewish University, which trains a new generation of Conservative rabbis including a small number of the letter's signatories.

He penned a response saying he admired highlighting the suffering of Palestinians but disapproved of what he saw as a lack of solidarity with Israel and Israeli Jews, and silence on their suffering and on the "murderous tyranny" of Hamas.

Both letters were published in Forward, a media nonprofit targeting a Jewish American audience, part of a larger debate playing out nationwide among many U.S. Jews who are divided over how to respond to the violence and over the disputed boundaries for acceptable criticism of Israeli policies.

To many who are old enough to remember the 1948 war surrounding Israel's creation and later Arab-Israeli wars, "Israel is fragile, under attack, and its enemies want to destroy it," Sarna said. "Younger Jews have been more influenced by a kind of David and Goliath narrative: To their mind, Israel has been stronger throughout their life. ... They are concerned more about what they see as disproportionality."

In a recently released survey of U.S. Jews by the Pew Research Center, 82% of respondents said caring about Israel is either an "essential" or "important" part of their Jewish identity. But the poll, conducted well before the latest fighting, also found deep skepticism toward authorities on both sides of the conflict, with just a third saying the Israeli government sincerely seeks peace and just 12% saying that about Palestinian leaders.

"There is a growing sense of alienation from the rigid, defensive script on Israel that fails to address Palestinian suffering and offer a path to peace," said Rabbi Sharon Brous, co-founder of IKAR, a Jewish community in Los Angeles. The national racial reckoning has fueled an urgency among many U.S. Jews to help realize "a more just and equitable reality for Israelis and Palestinians," she added.

"It breaks my heart that some in our Jewish community seem to believe that it is impossible, or at least unacceptable, to hold compassion, empathy and concern for the well-being of Palestinians along with compassion for our Israeli family," Brous said.

The conversations sparked by the conflict have unfolded against the backdrop of reports of rising anti-Semitic incidents since the fighting. Preliminary data compiled by the Anti-Defamation League shows an increase in violent attacks, vandalism and harassment in the U.S. and around the world, as well as online, the group said before the cease-fire took effect.

"With anti-Semitism on the rise ... there is an urgency for U.S. Jewry to find a common ground with each other across different denominations and age groups," said Jay Ruderman, president of the Ruderman Family Foundation, a Boston-based philanthropic organization that works in Israel and the United States.

"It also provides an opportunity for the American Jewish community and Israel to come together in a time when both groups need each other more than ever," Ruderman added.

Elliot Steinmetz, the men's basketball coach at the Jewish Orthodox Yeshiva University in New York, found himself enraged by the reports of anti-Semitic attacks and mounting criticism of Israel on social media.

On May 12 he posted on Instagram accusing some people of masking anti-Semitism behind political arguments. He challenged critics to be honest "instead of hiding behind Arab children," saying "that's what the terrorists do."

"What prompted that was seeing some of our politicians -- and it ultimately became celebrities and athletes as well -- who like to chime in on issues they're not educated on," Steinmetz said.

"All of a sudden there's attacks against Jewish people, and there's nobody standing up," he added. "Nobody."

Steinmetz's defense of Israel is a sentiment shared by former Yeshiva player Simcha Halpert, who moved to Tel Aviv in September to play professional basketball and has woken up several times in the middle of the night to rush to a bomb shelter. He defended Israel and accused Hamas of endangering innocents on both sides. Israel accuses Palestinian militants of causing civilian casualties by launching attacks from residential areas; many of Israel's critics, meanwhile, accuse it of disproportionate use of force.

Halpert is also concerned about things back home -- his father recently told his brothers in Los Angeles to avoid wearing in some areas the skullcap that identifies them as Jewish.

"It's just a little crazy that we have to be worried," Halpert said.

Buchdahl, the student who co-signed the letter published by the Forward, stressed that even as he supports solidarity with Palestinians, of course he opposes Hamas rockets being fired at Israeli civilians.

"I want people to see critiques of Israel as critiques of a nation-state," Buchdahl said. "I want you to understand that I am critiquing policy, I am not critiquing your identity."

Likewise, Artson, who penned the response, said he grieves innocent Palestinian casualties just as he does rockets that are "intended to create a massacre."

"My heart has been ripped apart on multiple incompatible jagged edges," Artson said.

An educator, he ultimately views the episode of the opposing letters as a learning opportunity.

"Two of the people who signed that letter came to my home, celebrated the holiday (of Shavuot) with me," Artson said. "They hugged coming in, they hugged going out. And we even talked about the letter." 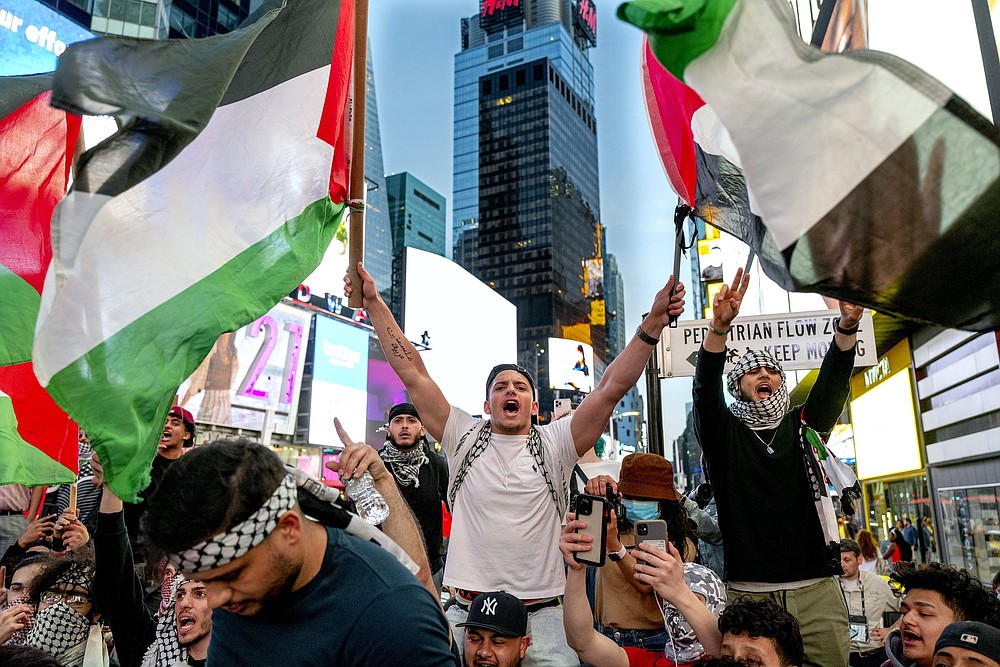 Pro-Palestinian supporters are shown during a demonstration in New York’s Times Square on May 20. The supporters are protesting an 11-day war between Israel and Hamas that caused widespread destruction in the Gaza Strip. (AP/Craig Ruttle)
ADVERTISEMENT