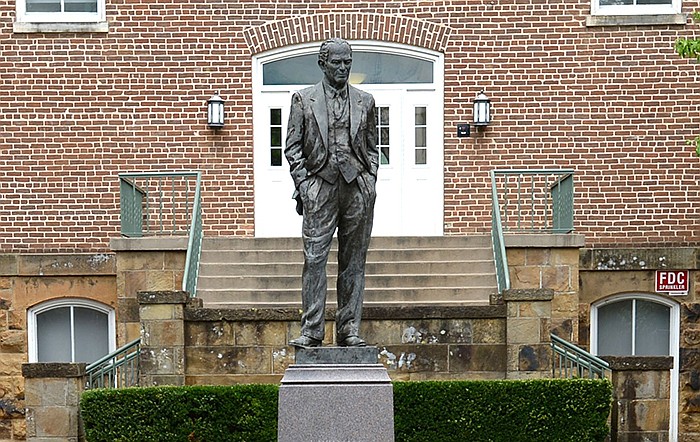 The family of former U.S. Sen. J. William Fulbright has asked the University of Arkansas board of trustees to allow Fulbright’s statue, shown in July near the west entrance of Old Main on the Fayetteville campus, to remain despite an effort to have it and Fulbright’s name removed from campus. (NWA Democrat-Gazette/Andy Shupe)

FAYETTEVILLE -- The statue of former U.S. Sen. J. William Fulbright at the University of Arkansas, Fayetteville should move to a different campus spot, but "it is in the best interest of the university" to keep the Fulbright College name, Chancellor Joe Steinmetz said in a letter published online Thursday.

The recommendations from Steinmetz to UA System President Donald Bobbitt differ from those of a UA campus committee formed to study Fulbright's legacy. The group last month recommended to Steinmetz that the Fulbright statue be removed from campus and that the Fulbright name be stripped from the university's arts and sciences college.

Fulbright is perhaps best known for introducing legislation in 1945 that created the international education exchange program named after him, but his place on the UA campus is being reconsidered given his legislative record supporting segregation and opposing civil rights in the 1950s and 1960s.

Bobbitt, at a Thursday meeting of the University of Arkansas board of trustees, said he will take "several weeks" to review Steinmetz' recommendations "and then make my recommendations to the board for possible action."

[DOCUMENT: Read the University of Arkansas chancellor's recommendations for the campus » arkansasonline.com/528fulbright/]

Steinmetz, in recommending the Fulbright statue be moved from its location outside Old Main, said in his letter that "it is our desire to place the statue in a location where we can provide an accurate context for the life of Fulbright; that is, the great accomplishments as well as his failures related to civil rights."

"I believe it is in the best interest of the university to retain this connection. We cannot and should not erase this history and connection to our campus, primarily for the educational value his presence brings to the campus," Steinmetz said.

The campus committee that reviewed Fulbright's legacy met virtually beginning last August and over a period of nine months heard from historians, biographers and others, according to university records.

The university formed the group after Black student leaders critical of Fulbright called for the removal of the Fulbright statue and his name from UA's arts and sciences college, doing so as part of the wider #BlackAtUark social media effort highlighting racism and inequity experienced on campus.

By a vote of 15-1, with three absent, the committee of faculty members, staff members, students and alumni voted to remove the bronze statue of Fulbright from campus. The group voted 11-5, with three members absent, to remove Fulbright's name from the university's arts and sciences college.

"There was a time when Black students were not welcome on our campus," stated the committee's recommendation to remove the statue. "J. William Fulbright, while Senator, voted against the interests of Black students, and supported values antithetical to the university. For many, the statue is a memorial to those segregationist values and a daily reminder to our Black students of that time."

A group of Black student leaders identified on social media as the Black Student Caucus last year promoted the petition calling for the removal of the Fulbright statue and name.

On Thursday, posts made on a social media account used by the group criticized the university's response.

"Why must we settle? Why must we compromise with racism? There is no debate to it. If someone has told you you have wronged them you don't get to debate how much or if you actually did it or not," stated one post, in part.

Fulbright family members last week sent a letter to the University of Arkansas System board of trustees defending the former senator and asking that the statue and college name remain in place.

Jay Fulbright IV, 63, in a phone interview Thursday said that he was only speaking for himself. He agreed there "should be some contextualization of [Fulbright's] career, so people could read more about him, both good and bad, and make their own opinion."

Fulbright, a Malvern resident, said he'd like to see the statue remain where it is because of its closeness to the Fulbright Peace Fountain. The monument celebrates "peace through education," he said, which he called the "real focus" of his great uncle, who died in 1995.

The Fulbright statue was dedicated in 2002. The University of Arkansas System board of trustees in 1981 approved naming the college for Fulbright after a $1 million gift from the Stephens Charitable Trust. An article in the Arkansas Gazette described Jackson Stephens, at the time the chairman and CEO of the investment banking firm Stephens Inc., as a longtime friend of Fulbright.

An email sent to UA community members Thursday included a link to Steinmetz's recommendations as outlined in a letter to Bobbitt. The letter, as posted Thursday to the university's website, is dated May 19.

"Some would prefer that the university completely remove the statue in an attempt to further distance the campus from Senator Fulbright," Steinmetz wrote.

He continued: "Others suggest that we move the statue from its current location in order to reduce the discomfort that some students feel from having to pass by it when entering and exiting Old Main. Although I am very sympathetic to the latter view because it challenges the university's efforts to expand a sense of belonging, my desire for moving the statue stems also from the educational benefits that could be derived from moving the statue to a location more conducive to learning and instruction."

No new possible campus location for the statue was given by Steinmetz in his letter.

Act 1003 states that a "historical monument shall not be relocated, vandalized, damaged, destroyed, removed, altered, renamed, rededicated, or otherwise disturbed," but allows for a process to seek a waiver from the law's requirements.

The law applies to monuments on public property and was passed this year with an emergency clause, so it took effect immediately.

Petitions seeking a waiver are to be reviewed by the state History Commission and decided on by a vote of the seven commission board members, who are appointed by the governor.

The board meets quarterly and is next scheduled to convene June 17, according to a spokeswoman for the state Department of Arkansas Heritage.

In his letter, Steinmetz said his formal request to move the Fulbright statue is being made "in conjunction with the statutory requirements" of the new law. He also asked "for time to develop a process to determine how we decide the future location."

Born in Missouri but raised in Fayetteville, Fulbright was a UA graduate, and before his lengthy career in the U.S. Senate, he was the university's president from 1939-41.

"Specific concerns center on his decision to sign the Southern Manifesto, unwillingness to challenge Orval Faubus during the Little Rock Central High School Crisis, opposition to the Civil Rights Bills of 1957 and 1964, and vote against the Voting Rights Bill of 1965," Steinmetz wrote.

"On the other hand, we must also weigh his contributions as a president of the University and as a U.S. senator, including opposition to the Vietnam war and perhaps his greatest legacy, the Fulbright International Exchange Program, likely the most prestigious, far-reaching and important exchange program in the world," Steinmetz continued.

Steinmetz stated that scholars and others who knew him "have largely tied his shortcomings to the demands of political expediency of the times."

"For them, his votes did not reflect a hardened personal racism toward African Americans. Instead, they were more a reflection of his need to appease a voting constituency that was not ready for social change," Steinmetz wrote.

Steinmetz in his letter said he recommended removing the name of former Arkansas Gov. Charles Brough from a campus dining hall because of his role in the Elaine Massacre. Some details remain unclear about the 1919 massacre, but historians agree that an unknown number of Black residents were killed by white mobs without justification.

"While it is true that under his gubernatorial leadership, Arkansas became the only Southern state to allow women's suffrage prior to the Nineteenth Amendment -- and he publicly supported anti-lynching laws, something rare in the day -- his governorship was significantly marred by his actions that led to one of the deadliest racial conflicts in history," Steinmetz said.

Steinmetz did not go into further detail, but the UA campus committee that reviewed Fulbright also evaluated Brough's legacy and voted 16-0, with three absent, to remove his name from the dining hall. The committee concluded in its recommendations last month that Brough "blamed Black people for the violence, and empowered those who oversaw the unjust judicial process that sent scores of Black men to prison and condemned twelve men to death."