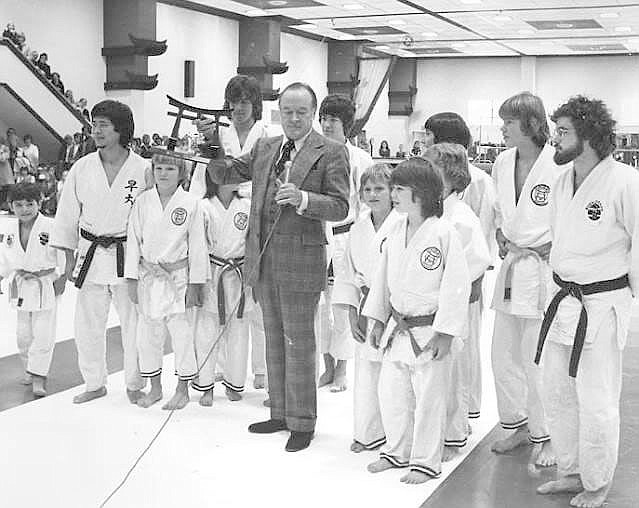 Comedian Bob Hope was a guest and member of Ichiban. The second boy to the left of Hope is Robbie Robertson. The instructor on the left is Nori Bunasawa. (Courtesy photo/Rogers Historical Museum)

In the 1960s and 1970s, our nation was in love with big gas-guzzling American-made cars. At the time, most people disdained imported cars, especially small foreign-made autos. But Willard Robertson had a vision and acquired the rights to import a new funny-looking little car called the Volkswagen. Robertson owned the distributorship rights for all of the states serviced by the port of New Orleans. According to one report, Robertson bought the VW rights in 1960 for $2,000 and sold them in the late 1970s for $154 million plus 4% of the gross profits.

It is unclear how or why Willard Robertson arrived in Rogers, but he was an incredibly wealthy and influential man, probably the richest man in Rogers and Northwest Arkansas at that time. In 1970, he contracted local architect Paul Wilbur to design a fabulous home and grounds called Greystone Estate on Beaver Lake just across the Arkansas 12 bridge. The luxurious estate included a 12,800-square-foot main residence with a basement, conference rooms, underground nuclear bomb shelter, large garage, swimming pool, tennis courts, gardener's apartment and other outbuildings. Underground tunnels connected the house with access to the lake and other buildings on the grounds. Another feature was an on-site mausoleum, in which I believe Willard Robertson is interred.

Today Greystone Estate is a wedding and corporate retreat space owned by the Mott family. It is essentially unchanged and as fabulous and beautiful as ever. According to Samantha Mott, Robbie Robertson returned to Greystone and was married there a couple of years ago.

Robertson and his wife, Marlin, had two sons, Willard (Robbie) Everett Robertson VII and Christopher, who attended Rogers Public Schools. In the early 1970s, Chris and Robbie were taught judo by Mike, Pat and Tim Mika and their dad, Mike Mika Sr. Chris and Robbie fell in love with judo. Mr. Robertson wanted a bigger space for his kids to work out, and soon after, Ichiban Dojo was built to house multiple sports. The Mikas were asked to be the judo instructors, but they decided to stay and train in their downtown Rogers location and concentrate on the sport of judo only. The Mika brothers went on to compete nationally and internationally, according to Tim Mika, and still teach today.

In 1975, Willard Robertson hired Perry Butcher to design the huge multi-sport Ichiban Dojo (which means "No. 1 gym" in Japanese), a top-flight world-class facility for his boys to train. The Ichiban Sports Complex was composed of three Asian style buildings – a gymnasium, a tennis center and a restaurant. It was one of the finest, best equipped sports complexes in the United States.

The tennis center, a 38,000-square-foot air-conditioned building, contained the first indoor tennis courts in the area. There were also two handball courts, and roll-away bleachers provided seating for 1,800 spectators during exhibition matches.

The gymnasium featured the largest spring-loaded judo mats in the United States. Comfortable upholstered seats provided seating for 250 spectators. The ultra-modern center featured carpeted floors and mirrored walls and was equipped with the best weight training and gymnastic equipment available. "...This is the most complete and professional facility in this country for viewing a judo tournament," Jack Murray wrote in Black Belt Magazine, June 1977.

In order to have the best instructors, Robertson brought in top experts such as Nori Bunasawa from Tokyo, Japan. Bunasawa was a seventh degree black belt. World-renowned Al Fong came to set up a first-class gymnastics program at Ichiban. The weight training program was taught by Wayne Carnahan, a graduate of the University of Arkansas and the Nautilus Sports Medical School in Deland, Fla. The top-rated indoor tennis facilities were used by University of Arkansas coach Tom Pucci to develop the Razorbacks' tennis program.

Ichiban had limited success in the beginning. The United States Olympic Judo Committee utilized the facility to hold the Pan American Games in 1975. Late in the year, half of the United States World Games team trained at Ichiban for two weeks before going to the Olympics in Vienna, Austria. The $2.7 million tennis center was the site of the 1977 AAU Gymnastics Championships and the 1979 National High School Judo Championships. (Ichiban: Fourth Olympic Training Center for Judo by Richard Zimmerman, Black Belt Magazine, January 1980)

In order to get a better picture of the Robertsons and the Ichiban Sports Complex, I reached out for memories on prominent Rogers Facebook sites and received almost a hundred responses:

Jeff Rogers: "I was blessed to have amazing coaches thanks to Mr. Robertson.When I was 15, I placed third in the Junior Olympic National Championships. Of course I was quite full of myself. Mr. Nakamura, the first Sensi (a master, a teacher, one with advanced knowledge and skill) came and asked Robbie and Chris Robertson as well as myself to work out with him. He was 75 and threw each of us around like rag dolls. What a valuable lesson I learned that day, by a wonderful man. Nori Bunasawa was the second Sensi at Ichiban. He was three-time All Japan Collegiate Champion and is chief editor of Judo Journal. Maurice Allan was the Third Sensi. He is from Scotland and is in the record books as Scotland's greatest wrestler. He was several time British Champion in both judo and wrestling. He was on the British Olympic team in 1976 and is presently an 8th degree black belt and head coach and owner of Sport Judo. People would come from around the world to train with Mo. With their training, I won four Junior National Championships. Ichiban existed because of the love and dedication of one man to his sons. I was only one of many who were blessed enough to share in a Father's dream for his boys."

Lynden Polk: "Mr. Robertson drove a VW bus, but had his wife chauffeured around town in a Rolls Royce, the first most of us had ever seen. Mike Rowden and I caught the school bus across from the entrance to their home (Greystone). One morning in the mid-1970s Mr. Robertson stopped his VW bus and offered to take us to school. He took us to the airport first, and gave us a tour at his private jet – very cool."

Tracy Tucker: "My father, Hardy Stephenson, moved to Shreveport in 1981 to manage Willard's investments. He owned many Popeye's Fried Chicken franchises in Louisiana."

Ted Givers: "One Saturday I was at Wesner's Grill having breakfast. I noticed a bunch of young boys also eating. I curiously asked a boy why were there early. He said Mr. Robertson was flying their judo team to Green Bay, Wis., for a match. Mr. Robertson was with them plus his pilots."

Willard Robertson's vision was to make Ichiban a world class training and exhibition center for the entire United States. His attempt to establish Ichiban as the fourth Olympic training facility in the nation failed due to the remote location of Rogers, bad timing, and lack of housing for large crowds of athletes and spectators. Another factor was the sports promoted by Ichiban were less popular and didn't attract a wide audience.

The luxurious center evolved into a facility used and enjoyed by mostly local citizens of Rogers. Robertson did not build the facility as a moneymaking venture, and it was never economically feasible. To make it available to the public, he had to subsidize the operation as much as $600,000 per year. (The Empty Six Million Dollar Judo Camp by Jack Murray, Black Belt Magazine, June 1977)

Willard Robertson died in 1983 at the age of 75 and with him died the dream of making Rogers a sports center of the world. Today the Ichiban complex is occupied by the U-Haul Rental Company and the former tennis center is now Metroplex Events Center.