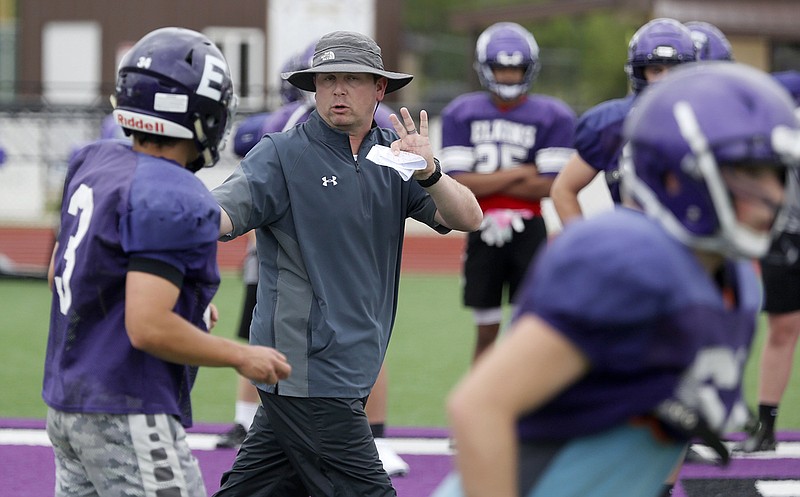 Finding a new starter at quarterback is one of the challenges facing Zach Watson, who replaced Bryan Hutson as head coach of the Elks after Hutson left for Berryville.

Elkins must replace several starters, including Kaine Johnson, an all-state quarterback and a starter on the Elkins' basketball team. Rising senior Braeden Welch and rising junior Kayson Drummond are the top contenders at quarterback for the Elk, who finished 10-3 last season.

"Braeden is a basketball kid who didn't play football last year," said Watson, who was the offensive coordinator for nine years at Morrilton before spending one year in the same position at Greenwood last season. "He's doing a good job of learning the offense and getting his skills back for football. Kayson Drummond is a good athlete and a baseball player who was a wide receiver last year."

Watson likes the potential at linebacker with outside linebackers Elijah Graham and Slate Warren and on the inside with Gunner Casebolt. He's also pleased with the leadership of Cole Blankenship, a lineman who'll be a three-year starter for the Elks.

"We'll play a 3-4 defense, which means it's very important to get some guys coming off the edge at outside linebacker with an attitude," Watson said. "Those guys are big and fast. With Cole, he'll be our left tackle. He's become a leader and done everything we've asked."

Watson will make his head coaching debut for Elkins Aug. 27 at Lincoln.

Ozark coach Jeremie Burns likes the big-play potential of Britton Gage and Peyton Durning, who displayed their athleticism mostly in track and field this spring while also mixing in some football.

The two wrapped up successful outdoor seasons by finishing in the Top 10 of the Arkansas High School Decathlon, which brings together top athletes from schools in different classifications to compete in a variety of track and field events. Gage finished sixth with 5,347 points while Durning was eighth with 5,251 points.

"Britton and Peyton did an outstanding job in track and field, where they both finished in the Top 10 in the Decathlon," Burns said of the two, who saw action at receiver last season. "They're going to be a big part of what we do this year."

Ozark spent much of spring drills working with young athletes to replace players who graduated this spring after leading the Hillbillies to a 9-4 season in the fall. The holes include the quarterback position, where Harper Faulkenberry was a two-time all-state player.

Rising senior Ryker Martin and rising junior Landon Wright are the top contenders to replace Faulkenberry at quarterback. Wright saw time as a backup last season while Martin started the final three games at quarterback in 2019 when Faulkenberry was injured.

"They're both good players," Burns said. "We'll let them battle it out and see what happens."

Ozark will open its season Aug. 27 at Clarksville.

Covid-19 took a toll on Gentry, which was severely limited when the Pioneers were eliminated 36-26 in the Class 4A state playoffs by Monticello.

"We had 18 players out because of contract tracing for that game," Gentry coach Justin Bigham said. "Right now, we've got 50 players in spring football and 14 of those are seniors. We had four seniors last year. Our numbers are good. We've got enough players out that we can split them up and have a spring game."

The spring game will be held on Friday beginning at 6 p.m. at Pioneer Stadium.

Three players are competing at quarterback to replace Zach Jarnagan, who graduated. Chris Bell has taken most of the first-team snaps at quarterback followed by Todd Hays and Addison Taylor, who started at quarterback for the freshman team last season. Whoever wins the job with have a huge target in Garrison Jackson, 6-foot-4 1/2 and 250 pounds. Jackson will also play defensive end for Gentry, which opens the season Aug. 27 at home against Waldron.

Bigham is also excited about the improvement from Lucas Guinn, a rising senior who'll play either guard or center in the fall for the Pioneers.

"The work Lucus has done in the weight room is through the roof," Bigham said. "He's also reduced his time in the 40 from 5.5 to 5.1. Really proud of the work he's done."

Prairie Grove coach Danny Abshier said the Tigers didn't get as much done as in previous springs before covid-19.

"For a variety of reasons, we couldn't get done what we what we usually do in the spring," Abshier said. "For one, covid-19 hit us harder in spring ball worse than it did last year during the season. It was just a few guys but we probably had only two or three days when we were in pads. There were a lot of little problems on why we couldn't get it done."

Abshier hopes to have more participation in the summer when the Tigers practice and lift weight three days a week and compete in a 7-on-7 tournament at Ozark in June.

Spring drills provided an opportunity for the Gravette coaching staff to plenty of athletes who may pressed into action this fall on the varsity level.

"We'll only have four seniors on the team and, for us, spring practice was incredibly valuable," Gravette coach Kelby Bohannon said. "We're going to play a lot of young guys."

One player Bohannon is sure about is offensive lineman Sam Mayo, who'll be a three-year starter for the Lions. Bohannon is also optimistic about Rhett Hilger, who'll replace his brother, Cy Hilger, at quarterback for Gravette.

"Sam will be the anchor on our offensive line," Bohannon said. "He's done a great job during the off-season in the weight room. Rhett started at wide receiver and cornerback for us as a sophomore, so he has some Friday night experience."

Gravette will continue off-season workouts and compete in a 7-on-7 tournament at Siloam Springs before opening the season against Vian, Okla., on Sept. 27.

Finding quality players beyond the starters is a goal for most coaches, including Josh Jones at Lamar.

"One deep, we're pretty good," Jones said. "We're good enough to compete. But it's tough if you don't have any depth with the teams we have to face in our league."

Lamar is particularly thin at wide receiver, where Skylar Smith is the only Warrior with varsity experience. Lamar will rely heavily on rising seniors Joe Dalton and Landon Harrison, who started last year at quarterback.

"Joe Dalton, he's a running back and linebacker, and he'll have a good season for us," Jones said of the Warriors, who finished 5-5 last season. "Landon, he was solid all year at quarterback and it's always good to have your starter back at that position." 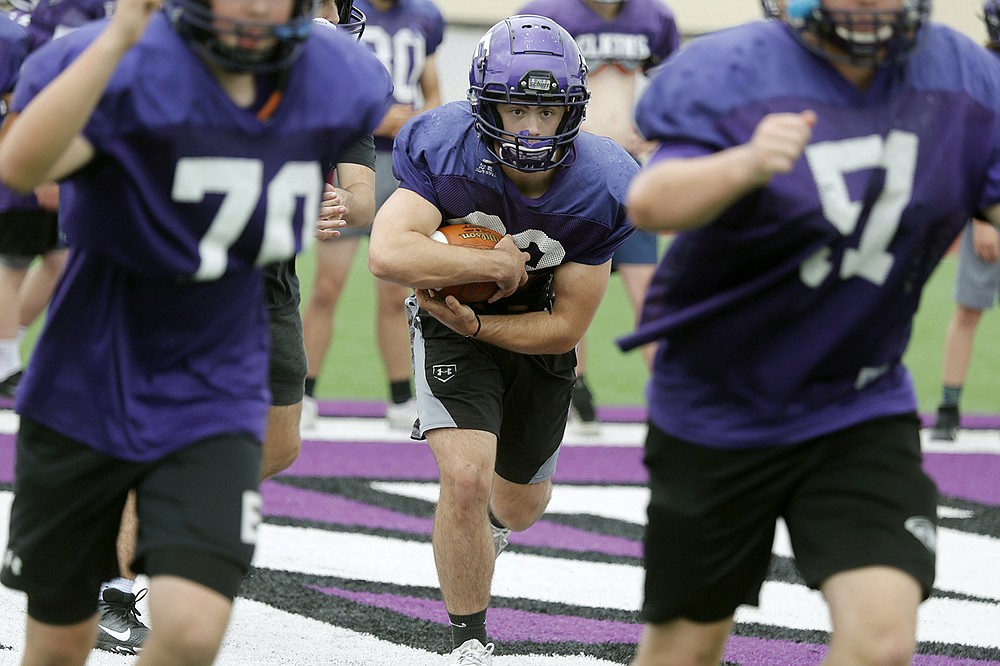