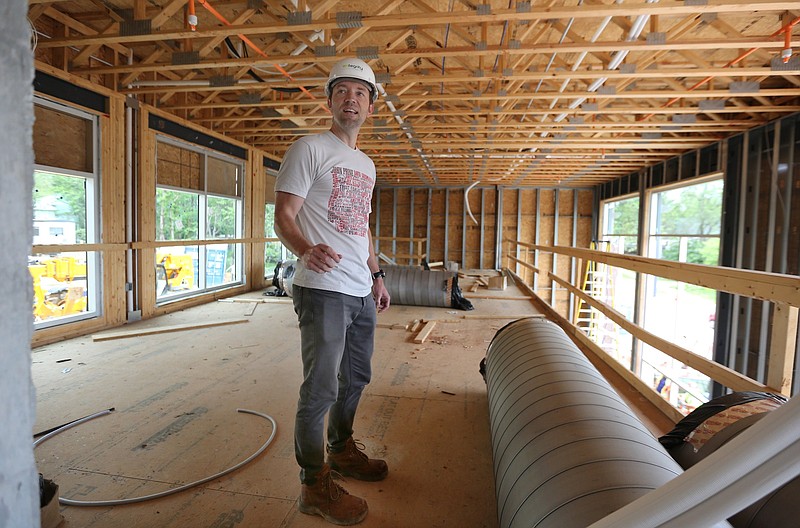 John Coleman, regional director with Entegrity, describes the sustainability area of Entegrity's new office Tuesday, May 18, 2021, still under construction within the Network, a mixed use building featuring office and apartments, that will be powered by solar. The new building is located at 288 So. School Avenue in Fayetteville. Entegrity is an energy services, sustainability and solar development company specializing in the implementation of energy conservation and renewable energy. Check out nwaonline.com/210523Daily/ and nwadg.com/photos for a photo gallery..(NWA Democrat-Gazette/David Gottschalk)

FAYETTEVILLE -- When Entegrity Energy Partners decided to build a new office here, the company set its sights on a mixed-use facility close to downtown, with both space for staff in addition to 28 residential apartments that will showcase the company's energy efficient designs and solar technology.

Dubbed Network, the project will be a net zero building, which means the total amount of energy used by the development each year equals the renewable energy created on the site, basically offsetting energy costs to zero. The building features solar power and its energy efficient apartments will be equipped with smart home technology.

Little Rock-based Entegrity is a sustainability and solar development company that focuses on energy conservation and renewable energy. The company has had offices in Fayetteville since 2012 but is opting for its own space currently under construction on the 200 block of South School Avenue.

The development is across the street from the Fayetteville Public Library's new addition, close to the city's Cultural Arts Corridor and a short stroll from the extensive system of trails, which link to the Razorback Greenway.

"We are thrilled," John Coleman, regional director for Entegrity, said in a recent interview. "We really couldn't ask for a better location.

Network is the first net zero mixed-use development in the state, according to the company. Back in 2017, Entegrity's headquarters in Little Rock -- in a renovated circa 1958 building -- was the state's first net zero project. It is indicative of the type of project the city likes to see, said Jonathan Curth, development services director for the Fayetteville Planning Commission.

First, it meets the need for mixed use work/life spaces close to city amenities and secondly it's built to be energy efficient. He said while the city has set the stage for infill activity in the vicinity of the Network development, it's mostly being driven by market forces.

"A lot of what's happening there is organic," Curth said.

The building is being managed by Fayetteville-based Specialized Real Estate Group Inc., which is now pre-leasing apartment space at Network with move in expected in August. Apartments vary in size from 470 square feet to 710 square feet with rents ranging from about $900 to about $1,150, with all utilities included.

"We wanted to be in the middle of the market rate on rent," Coleman said.

Coleman said the $5.2 million Network project is about 70% complete and should be finished by July. He said the company beat recently skyrocketing construction costs by locking in its lumber prices and other needs before prices accelerated.

The building will also include recharging stations for electric vehicles, covered areas for bike parking and communal balconies with impressive views of the Boston Mountains.